Latissimus or Side Lung Breathing or Wing Breath | YMAA
Skip to main content
Free Shipping (US Only, Conditions apply) on Orders $75 or more / Free Hat on orders $75 or more

Home >> Articles >> Latissimus or Side Lung Breathing or Wing Breath 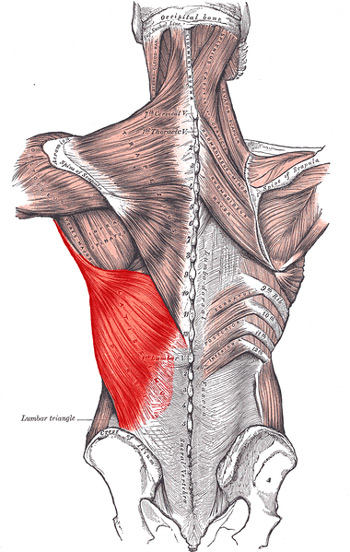 Latissimus or Side Lung Breathing or Wing Breath

It is not enough to just breathe in and breathe out, or even sigh and linger. You need to develop the skill of moving the air into specific areas within the lungs. Some disciplines call them chambers; some call them sections, and others call them areas, or rooms. I created friendly names and images for the different areas in the lungs—images that will help direct the air or the breath to wherever you desire it to move.

It is not enough to just breathe in and breathe out, or even sigh and linger. You need to develop the skill of moving the air into specific areas within the lungs. Some disciplines call them chambers; some call them sections, and others call them areas, or rooms. I created friendly names and images for the different areas in the lungs—images that will help direct the air or the breath to wherever you desire it to move. For example, latissimus or wing breath represents the need to move air into the sides of the lungs. You want to move the air into the lungs sideways toward the area from the armpit down a straight line all the way to the hip, isolating air in our imagined wings, leading or pushing air to that area and moving the lungs laterally.

This skill involves being able to lead and isolate air into different sections of the lungs, in this case to the sides of the lungs. Focus on moving the air outward toward the latissimus muscles. Inhale deeply into both sides of your lungs, expanding the muscles and ribs outward toward the arms. Exhale and release the air, while using your mind and the sigh sound to relax the muscles around the lungs. Each time you inhale, try to fill your lungs to about 80 percent of their capacity, and surf the breath. Relax your shoulders, neck, and face. As you exhale, remember not to collapse the thoracic spine.

You can actually monitor if you are doing this breathing correctly by placing the thumbs on the side of the lungs and the fingers toward the front of your ribs. When you exhale, your fingers will touch each other, and when inhaling, they will move and separate from one another. If you can have them move toward and away from each other, you are doing it correctly and you have mastered this wing breath breathing skill.

Move Lungs in Either Direction

How can you actually expand the lungs in whatever direction you wish? One of my students is an expert in understanding the anatomy and function of the human body; he is one of the leading surgeons in the Boston area. After seeing what I can do with my lungs, he told me, “Rami the lungs are like balloons. When you breathe in, the whole balloon expands and when breathing out, it contracts. I do not know what you are doing and I do not understand how you are able to expand different parts of your lungs at will, but let me think about it and I will come back with an answer.”

Theoretically he is right. You cannot expand parts of your lungs without moving air to the entire lungs. So how can you do it? How can you expand the sides or the upper back or just the front bottom of your lungs? A few days later, the same student came back, all smiles, “Rami, I know what you are doing!” I said, “Please tell me because I can do it, but I do not know why.” He told me, “Rami, it is through muscle control.” The second he said this, I felt it. Some of the muscles I contract and others I let go. We have muscles around the lungs. You can learn to control them. You will learn through practice how to isolate specific groups of muscles and tense them, while allowing other groups of muscles to be relaxed. By achieving this muscle control, it will allow you to direct air to expand the areas in the lungs that you choose. By tensing and relaxing the various groups of muscles, you are restricting the air from moving to some areas and allowing it to move and expand in others.

Be an Eagle to Develop Latissimus Muscles

Sometimes you can use the arms to help develop this skill as well as create the visualization, sensation, or illusion of having real wings and a spirit of an eagle. Sit or stand with your arms on your knees or hips and spread the armpits open. Move the elbows out and create the shape of wings; pretend that your arms are like two wings. Fill up your wings from back to front. Be aware that there is a tendency to get more movement in the front part of the lungs.

Person A uses the pointer fingers of both hands to gently clamp the latissimus dorsa muscle from the front and back. Person B attempts to breathe into that area and expand the clamped fingers of Person A. Work with the principle of the 80 percent effort. Sighing and lingering at the end of inhalation and exhalation adds tremendously to this exercise.

There is a tendency on exhalation, because the ribs and the lungs are moving down, to let go of the suspended spine. Balance the emptying of the lungs and the dropping of the ribs with lengthening of the spine and suspension of the head. Work with 80 percent effort or, with the lungs, you can work to 90 percent capacity because you want to bring as much air as you can into the lungs. Do not inhale all the way in and do not exhale all the way out. You are reserving 10 percent on each side: inhalation and exhalation. I call it the ‘floating 10 percent.’ It just floats from side to side between inhalation and exhalation.

When utilizing this skill, you allow your whole body to stay relaxed. You do not put compression against your nervous system at the end of inhalation, and you are not running out of breath at the end of exhalation. This skill of using the ‘floating 10 percent’ will allow you to maximize the air and oxygen going into the blood stream while preventing the negative elements of breathing in and out using 100 percent effort. You can keep the breath, the mind, the energy, and spirit strong and in a smooth balanced circle of flow.

Another way to understand wing breath breathing, or the latissimus dorsi side breathing, is by practicing seesaw breathing. When you perform seesaw breathing, you are performing half of the wing breath. You are moving air to one lung or wing at a time by lifting the shoulder and isolating one lung at a time. You may have a stronger experience of where that wing area is and how it feels to move air there. Lifting the shoulder may make it easier to tense groups of muscles that you were not able to control and tense when you were doing the wing breathing. When working with the lungs, you first experience the major areas, chambers, parts or sections, and later as you develop the skill of muscle isolation and control, as well as more sensitivity, you will be able to find other smaller points.