Martial Moralities | YMAA
Skip to main content
FREE Shipping Order Over $70. (US Only, Conditions apply)    |   Up to 40% Off. Exclusions apply. 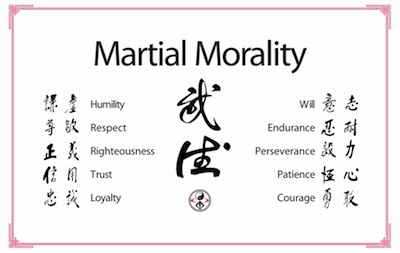 Martial morality has always been a required discipline in Chinese martial arts society. Before you learn any martial techniques, you should first understand this subject.

Martial morality has always been a required discipline in Chinese martial arts society. Before you learn any martial techniques, you should first understand this subject.

In Chinese martial arts society, it is well known that a student’s success is not determined by his external appearance, nor by how strong or weak he is, but rather by the student’s way of thinking and his morality. Chinese martial artists have a saying: “A student will spend three years looking for a good teacher, and a teacher will test a student for three years.” A wise student realizes that it is better to spend several years looking for a good teacher than to spend the time learning from a mediocre one. A good teacher will lead you to the right path, and will help you to build a strong foundation for your future training. A teacher who is not qualified, however, will not help you build a strong foundation, and may even teach you many bad habits. In addition, good teachers will always set a good example for their students with their spiritual and moral virtue. Good martial arts teachers do not teach only martial techniques, they also teach a way of life.

From a teacher’s perspective, it is very hard to find good students. When people have just begun their studies, they are usually enthusiastic and sincere, and they are willing to accept discipline and observe proper manners. However, as time passes, you gradually get to see what they are really like, and sometimes it’s quite different from how they acted in the beginning. Because of this, teachers quite frequently spend at least three years watching and testing students before they decide whether they can trust them and pass on to them the secrets of their style. This was especially so in ancient times when martial arts were used in wars, and fighting techniques were kept secret.

Teachers have long considered Wude to be the most important criterion for judging students, and they have made it the most important part of the training in the traditional Chinese martial arts. Wude includes two aspects: the morality of deed and the morality of mind. Morality of deed includes: Humility, Respect, Righteousness, Trust, and Loyalty. Morality of mind consists of: Will, Endurance, Perseverance, Patience, and Courage. Traditionally, only those students who had cultivated these standards of morality were considered to be worthy of teaching.

Of the two aspects of morality, the morality of deed is more important. The reason for this is very simple. Morality of deed concerns the student’s relationship with master and classmates, other martial artists, and the general public. Students who are not moral in their actions are not worthy of being taught, since they cannot be trusted or even respected. Furthermore, without morality of deed, they may abuse the art and use their fighting ability to harm innocent people. Therefore, masters will normally watch their students carefully for a long time until they are sure that the students have matched their standards of morality of deed before letting them start serious training.

Morality of mind is for the self-cultivation, which is required to reach the final goal. The Chinese consider that we have two minds, an “Emotional mind” (Xin,) and a “Wisdom mind”(Yi, ). Usually, when a person fails in something it is because the emotional mind has dominated their thinking. The five elements in the morality of mind are the keys to training, and they lead the student to the stage where the wisdom mind can dominate. This self-cultivation and discipline should be the goal of any martial arts training philosophy.

The following is a discussion on the requirements of morality.

Humility comes from controlling your feelings of pride. In China it is said: “Satisfaction (i.e., pride) loses, humility earns benefits.” When you are satisfied with yourself, you will not think deeply, and you will not be willing to learn. However, if you remain humble, you will always be looking for ways to better yourself, and you will keep on learning. Remember, there is no limit to knowledge. It does not matter how deep you have reached, there is always a deeper level.

Confucius said, “If three people walk by, there must be one of them who can be my teacher.” There is always someone who is more talented or more knowledgeable than you in some field. The Chinese say: “There is always a man beyond the man, there is a sky above the sky.” Since this is so, how can you be proud of yourself?

Respect is the foundation of your relationship with your parents, teachers, your fellow students, other martial artists, and all other people in society. Respect makes a harmonious relationship possible. However, the most important type of respect is self-respect. If you can’t respect yourself, how can you respect others or expect them to respect you? Respect must be earned, you cannot request or demand it.

In China, it is said: “Those who respect themselves and others will also be respected.” For example, if you despise yourself and become a villain in this society, then you have lost your self-respect. Since you have abused your personality and humility as a human, why should other people respect you? Only when you have demonstrated that you are deserving of respect will respect come to you automatically and naturally.

Righteousness is a way of life. Righteousness means that if there is something you should do, you don’t hesitate to take care of it.  And if there is something that you should not do, you don’t get involved with it. Your wisdom mind should be the leader, not your emotional mind. If you can do this, then you will feel clear spiritually, and avoid being plagued by feelings of guilt. If you can demonstrate this kind of personality you will be able to avoid evil influences, and you will earn the trust of others.

Here is a tale of events that happened during the Chinese Spring and Autumn Period, (722-481 B.C.). In the state of Jin, there was a high-ranking official named Qi Xi. When he was old and ready to retire, Duke Dao of Jin asked him to recommend a candidate to replace himself.

Qi Xi said, “Xie Hu is an excellent man who is most suitable to replace me.”

Duke Dao was very curious and said, “Isn’t Xie Hu your political enemy? Why do you recommend him?”

Unfortunately, before Duke Dao could assign Xie Hu the new position, Xie Hu died. Duke Dao could only ask Qi Xi to recommend another person. Qi Xi said, “Now that Xie Hu is dead, the only person who can take my place is Qi Wu.”

Duke Dao was again very curious and said, “Isn’t Qi Wu your son? Aren’t you afraid that there may be gossip?”

“You asked me only who was the most suitable for the position, and did not ask if Qi Wu was my son. I only replied with who was the best choice as a replacement.”

As Qi Xi predicted, his son Qi Wu was able to contribute greatly. People believed that only a virtuous man like Qi Xi could recommend a really talented man. He would not praise an enemy to flatter him, and he would not promote his own son out of selfishness.

Trust includes being trustworthy, and also trusting yourself. You must develop a personality, which other people can trust. For example, you should not make promises lightly, but if you have made a promise, you should fulfill it. Trust is the key to friendship, and the best way of earning respect. You must learn to build up your confidence and demonstrate it externally. Only then can you earn the trust and respect of others.

Loyalty is the root of trust. You should be loyal to your teacher and to your friends, and they should also be loyal to you. Loyalty lets mutual trust grow.

In the Chinese martial arts, it is especially crucial that there be loyalty between you and your master. This loyalty is built upon a foundation of obedience to your master. Obedience is the prerequisite for learning. If you sincerely desire to learn, you should rid yourself of false dignity. You must bow to your teacher both mentally and spiritually. Only this will open the gates of trust. A teacher will not teach someone who is always concerned about his own dignity. Remember, in front of your teacher, you do not have dignity.

There was a story told to me when I was a child. A long time ago in Asia there was a king. Nobody had ever seen the king’s real face, because whenever he met with his ministers and officials, and whenever he appeared in public, he always wore a mask. The face on the mask had a very stern and solemn expression. Because nobody could see the real expression on his face, all the officials and people respected him, obeyed him, and feared him. This made it possible for him to rule the country efficiently and well.

One day his wife said to him, “If you have to wear the mask in order to rule the country well, then what the people respect and show loyalty to is the mask and not you.” The king wanted to prove to his wife that it was he who really ruled the country, and not the mask, so he decided to take the mask off and let the officials see his real face.

A few months passed, and the situation got steadily worse. He had lost the solemn dignity, which made people fear him, and even worse, the officials had started to lose respect for him. Not only did they argue with each other in front of him, they even began to argue with him about his decisions.

He soon realized that the unity and cooperation among his officials had disintegrated. His ability to lead the country had gradually disappeared, and the country was falling into disorder. The king realized that, in order to regain the respect of the people and his ability to rule the country, he had to do something. He therefore gave the order to behead all of the officials who had seen his face, and he then appointed new ones. He then put the mask back on his face. Soon afterward, the country was again united and under his control.

The above is an excerpt from The Essence of Shaolin White Crane—Martial Power and Qigong by Dr. Yang, Jwing-Ming.