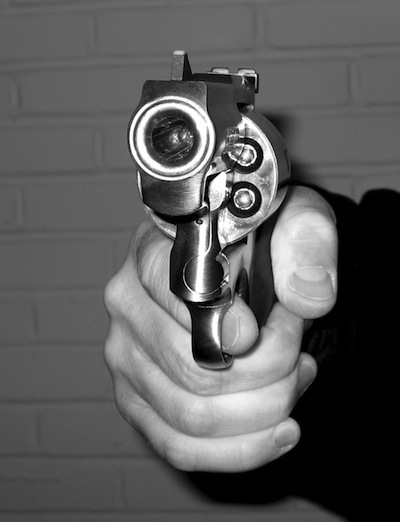 While handguns, shotguns, rifles, and carbines can all be used in self-defense, it can be very challenging to justify anything other than a handgun in court, save for in your home (or some places of business) where castle laws might apply.

While handguns, shotguns, rifles, and carbines can all be used in self-defense, it can be very challenging to justify anything other than a handgun in court, save for in your home (or some places of business) where castle laws might apply. There are few good reasons to walk around with a long arm on the street unless you are in the middle of a riot or natural disaster. But, preclusion still applies. Why were you there in the first place?

He is an up-and-coming lieutenant in a foreign service. He heard a story about something I did the week before and so he tracked me down to ask about some one-on-one training time. He wanted close-quarters handgun. Or knife throwing. Sigh. We went with the handgun. Four count draw, dry fire, firing from retention, moving and shooting, scanning. Because he was a leader, we also went into how to train: Faults to watch for, what would happen if his men ever needed to shoot as a team.

At one point he threw up his hands and said, “I am so angry. Everything they taught us was wrong!”

What he had learned at his basic training were the fundamentals of pistol marksmanship. They weren’t wrong; they were just incomplete. Beginners need to learn safety. It’s stupid to accidentally kill yourself. They need to get some feeling for success and how the weapons work, so they become a stable platform. They learn grip and sight alignment and sight picture and breath control and trigger press.

They learn these fundamentals in a context that makes it easy for the instructor to monitor and easy for the student to correct—good lighting, good footing, hearing and eye protection, safety monitors, and not moving.

Those environmental basics are rare as h*ll in real life. Gunfire is loud and muzzle flash can be blinding in low light. Often not only is the footing bad, but it may be too dark to tell how bad it actually is. And you’d better da*n well be moving unless you already have good cover. If you do have good cover, think about moving anyway, because the threat should try to flank you. And cover geometry can be counterintuitive—cover is often better the farther you are away from it. Said it was counterintuitive.

There are details that came at a price: When and how to fire from retention, why the weapon should be canted out when at retention—details that aren’t on the beginning syllabus.

Combat shooting, whether raiding or counter ambush, is a whole different animal than range training. Honestly, range training is probably closest to assassination skills, which aren’t that useful for good guys.

But that doesn’t make dojo or range training wrong. I go to the range. I practice my dry-fire and failure to fire drills. When I have access to a good instructor, I go to my martial-arts classes. Nothing is wrong, but it is incomplete. So when I practice my dry fire, I know what I will see when the projectile hits flesh and I know what it will do to my mind and body, because I have experienced it. Once. When I go to classes, I know when I am practicing moving and when I am practicing breaking people. Often, in my experience, the instructor does not know that crucial difference.

It gets wrong for me in two ways: When the students insist that what they do is what there is. When they are taught that the real world changes nothing (one of the best grappling instructors in the world talking to a room full of LEOs: “No, we’ve never actually tried this in body armor and duty gear, but that wouldn’t change anything.” Sigh.), that there is a one-to-one correlation between the skills they practice safely with their friends on their nice clean mats and being ambushed by someone who uses violence professionally or is in a rage. The other “wrong” is when the techniques become centered around artificial aspects. Altering techniques for safety is inevitable, but when the altered technique becomes the “right” way and the effective technique becomes the wrong way, it doesn’t work for me.

So I practice the pieces with as much awareness as I can of the totality, and the absolute certainty that there is a lot of that totality I haven’t seen yet, knowing that I will inevitably fail and have to improvise.

Arguably, the most popular weapon on the street is the semi-automatic pistol. They tend to be lightweight, easy to carry, quick to reload by changing the magazine, and have more capacity than other types of handguns. They use the recoil or gas energy of spent rounds to automatically load another cartridge into the chamber until the ammunition is exhausted. If you “limp wrist” the weapon, it may not feed properly causing a jam, which could prove fatal in a firefight.

Another popular handheld weapon is the revolver. Revolvers are more mechanically reliable than semi-automatics, especially in close quarters, yet hold less ammunition, take longer to reload, and are frequently bulkier to carry.

If you are going to carry a pistol for self-defense, spend a lot of time at the range becoming familiar with your weapon, its sighting system, and how to manage the various malfunctions that might occur when deploying it in battle. Never forget, however, that targets do not shoot back. People do.
At a regular range, you cannot practice moving and shooting, utilizing cover, or dealing with the adrenaline rush that accompanies a lead shower. Consequently, once you are reasonably proficient, it’s well worth paying for a tactical course that lets you work on these aspects of pistol-craft. Additionally, become intimately familiar with retention techniques. The last thing you want is for your weapon to be taken away and used against you.

The gun has to fire. It might not. Don’t panic. With a revolver or some semi-automatics, a piece of clothing may have fallen under the hammer. If the barrel of many semi-automatics is pressed too hard against anything, the weapon is taken “out of battery,” meaning the slide assembly comes back just enough that the hammer cannot fall. Get a little more room, possibly by striking the adversary, then pull back and try again.

This is also where all the complicated gear of a modern weapon can get in the way. You may be working at a weird angle that makes working the safety hard. Have you practiced working your safety by rubbing the weapon against your clothes?

You may have dropped and picked up the weapon with your thumb through the trigger guard.

You must know your weapon well enough to adapt.

You have to shoot safely as well. Yup, even in a fire fight. The first rule of a close-quarters gunfight is DON’T SHOOT YOURSELF. Chances are good that you will be shooting by feel, not by sight. Make sure that the body part you are pressing the barrel against is the threat’s and not your own. Keep your hands out from in front of your gun. If you are going to shoot into the neck or head of a threat who is on top of you, slamming your head against the pavement, make sure you are not gripping his head on the other side—a flattened slug and bunch of skull fragments blowing through your hand won’t help your piano playing.

You will touch the threat’s body with the end of the barrel: The biggest part of the body you can find. By that we mean never go for edges. Whether you are shooting into the torso from the front, sides, or back, shoot to the middle of the torso, not toward an angle. If all you can feel is the leg, aim for the femur. For the head, right in the ear or through the nose.

Expect meat and blood to explode. Expect, like with a knife, for things to get slippery and smelly. If you have never fired a gun except at a range with hearing protection, you may be shocked by how loud the explosion will be, unless you don’t hear it at all. Weird stuff happens in a gunfight. Be prepared for an insanely loud crash that will hurt your ears and make you feel like you have been hit in the head with a baseball bat. Expect to be burned and bruised wherever the muzzle pressure might have touched you. This is close-quarters work. It’s nothing like shooting at a paper target.

Last thing: Unless you carry a revolver, expect your fancy pistol to turn into a single-shot weapon. At this range, someone will almost certainly have pressure on the slide, or be blocking the ejector, or the slide will not have room to move all the way back. Just expect the weapon to jam. If you can, the response is to put your off hand over the slide, slam the bad guy with your elbow backed by whole body torsion, and use that action to chamber another round. You will almost certainly not have room or time for a standard tap, roll, and rack.

(This excerpt is from Scaling Force: Dynamic Decision-Making Under Threat of Violence by Rory Miller and Lawrence A. Kane)