Karate-A Unique Balanced Approach to Healthy Living | YMAA
Skip to main content
FREE Shipping Order Over $70. (US Only, Conditions apply)    |   Up to 20% Off. Exclusions apply. 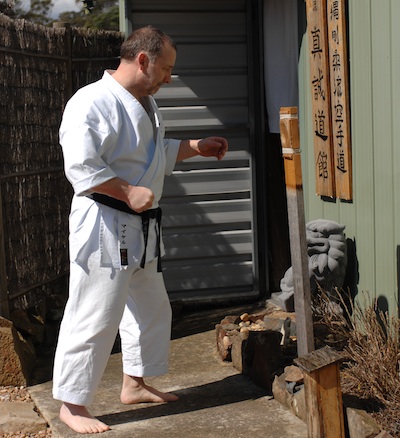 Those who enter a dojo for the purpose of maintaining good health engage in a training routine that may look similar to those engaged in budo karate, but this similarity exists only on the surface.

The physical movements may look the same to the casual observer, but in the mind of those training in kenko karate there is a sense of recreation, enjoyment even, that is absent from the mind of a budoka.

Kenko karate does not require its participants to understand the meaning of the kata they practice. There is no necessity to make the techniques work at all. Neither is there a sense of having to deal with someone else... in kenko karate there are no unfriendly adversaries. The kata in kenko karate have no bunkai. They are the same kata we find in budo karate, of course, but not the same as those found in kyogi (sport) karate.

Kata training in kenko karate is done in order to help the body maintain a sense of balance and flexibility, and the constant repetition of the kata engages the mind too! Try repeating the same kata twenty times and see how often the mind wanders from the task at hand; you might be surprised at how often it will, and how difficult it can be to remain on target and complete the challenge. Over time, the practice of kenko karate keeps the mind sharp, develops healthy breathing patterns and physical flexibility in those over sixty. However, as beneficial as kenko karate may be, it is of little use if you fail to take a similar approach to your life outside the dojo. Smoking, overeating, or the excessive consumption of alcohol will undo any positive characteristics of training and may perhaps negate them altogether.

The Way of Karate

When you hear the terms “karatedo” or “the way of karate” being applied to your training, you need to think of the bigger picture. You should take your thoughts out of the dojo and into your life as a whole. If you do not, then maybe you don’t understand what karate is. Of course, your karate is what you understand it to be, so if you perceive it as merely a different method of fighting to that used by others, then in my book at least, your training has limited value. Like the sprinter Kanazawa sensei spoke of, your karate has a short-lived shelf life and a “sell-by date” that is never far away. If your karate produces a way of thinking grounded in negativity and conflict, or a sense of suspicion toward others, then you can say your karate is creating conflict in your life instead of harmony.

If karate is your way of maintaining good physical, mental, and spiritual health, you need to remember that none of this is achievable while you’re living a life filled with discord. While your body may be kept healthy through physical exercise, you should not neglect the mind or the spirit. If you identify your karate as budo karate, a martial art, then you need to cultivate not a warrior’s mind but a calm and well-balanced mind: for budo is all about balance.

Kenko karate is not concerned with fighting nor effective self-defense techniques, but it is nonetheless a difficult and demanding pursuit. Finding a person teaching kenko karate should not be too difficult. All commercial clubs are practicing either kyogi and kenko karate, or a mixture of both. They may not advertise it; indeed, the local instructor may not even be aware of it. He may be under the misapprehension he is training in and passing on some form of budo karate; however, the differences are fairly easy to spot if you take the time to look.

While those involved with kyogi and kenko karate look to external markers as a sign of progress, a budoka understands the importance of the internal journey being made. The signs of progress by budoka are less obvious to those walking the path and are, rather ironically, usually observed first by others.

Kenko karate is good for young and old, male and female, able and disabled. It has real value and adds to the overall quality of your life. It is a way of expressing yourself and can act as a tremendous release mechanism against the pressures of everyday life. It affords an opportunity to escape into another culture and in doing so adds to the understanding of your own. By training the body, mind, and spirit, kenko karate offers the world a uniquely balanced approach to healthy living. The main requirement is honesty between teacher and student, and a willingness to make a commitment. Oh yes... and a desire to live a healthy, happy, and contented life.

I read an article written by a teacher about what he referred to as a reality-based martial art. I wondered for a moment what this was saying about karate. In a world where cage fighting, in all its manifestations, has reduced the image of martial arts to entertainment similar to that found in ancient Greece and Rome, it would appear karate is no longer considered real enough to be effective in a real fight. Reading the article, my initial indignation soon eased as I realized it was not based in any reality I ever came across when fighting on the streets, but instead was geared toward the writer promoting himself as the answer to every frightened citizen’s fears.

If his article was to be believed, you are in danger of being attacked by a knife-wielding thug every time you leave the safety of your home. I began to wonder what kind of a world this guy lived in... and if it had anything in common with my own. I had to admit, his assertion that traditional karate just doesn’t work seemed to have credibility, at least on the surface. But in reality, I think this claim has more to do with the abysmally low personal standards of many who teach karate to the public these days, not karate itself.

Making easy money, pampering your ego, or seeking celebrity are all poor reasons to teach karate. When “traditional karate” is spoken of, people are almost always thinking about budo karate, a type of training that produces well-balanced individuals who are able to defend themselves against unwarranted violence. These people have learned how to do this by facing the challenges presented to them by their sensei in the dojo, individuals who have learned to look inward at themselves, and in doing so, found what it takes to be outwardly modest and unpretentious from a position of inner strength. In this simple statement, you can observe the essence of budo. A strong and determined mind coupled with a strong and healthy body are the results of budo training. The humility required to keep that strength under control is the hallmark of a budoka. For if you do not aspire to strength and gentleness in equal measure, if you develop one at the expense of the other, then you are not expressing the balance necessary in budo karate.

There are a number of errors people make when training in budo karate. To begin with, budo will not bring wealth, celebrity, or pamper the ego. Nor will the training produce a fearsome fighter, as believed by the more immature members of the karate community. Budo will not connect you to the mindset of the samurai warriors of old Japan, but it will demand you do the right thing for no other reason than it is the right thing to do. Budo will often make you appear to be less successful when compared to other (commercially successful?) karate people. And finally, budo will continually ask of you the following question: are you the person you think you are?

Within karate today, there is an obvious problem, and this is it: the majority of those who put on a plain white gi believe they are training in budo karate, when actually they are engaged in something else. Now, although it might not be budo, the activity can still be a positive force in life if you remain true to yourself. The trick is to match your dreams with your reality, something I would suggest many karateka never really manage to achieve. When people gather in groups, there is a pecking order to establish. This may be done overtly if those involved are crude and uneducated, or more covertly if people put a little more thought into it. Either way, if you find yourself thinking there is a need to establish yourself, then you don’t understand budo at all.

You see, with budo no one needs to establish anything; it’s always obvious. When people wear badges that say “teacher” or “sensei,” to let everyone know just how important they are, then budo is the last thing they are involved in. Budo addresses the self and does battle with the self: it cultivates a person from the inside out, while other forms of karate training tend to set different goals and use different benchmarks for progress.

The above is an excerpt from Shin Gi Tai—Karate Training for Body, Mind, and Spirit by Michael Clarke