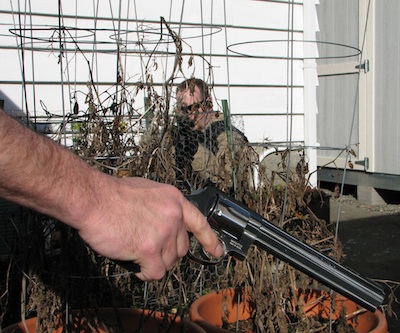 Don’t over-romanticize guns. A handgun  is a nifty machine that throws a hunk of metal in a straight line. No more, no less. A .45 caliber bullet, unless it hits bone and sends fragments spinning, does just as much damage as driving a blunt 45/100 of an inch-diameter stick into the body.

Don’t over-romanticize guns. A handgun  is a nifty machine that throws a hunk of metal in a straight line. No more, no less. A .45 caliber bullet, unless it hits bone and sends fragments spinning, does just as much damage as driving a blunt 45/100 of an inch-diameter stick into the body.

Both authors have extensive training with handguns. Lawrence Kane has attended a number of classes and shot competitively for a while; Rory Miller has been trained as a tactical shooter for an entry team.

None of that means sh*t.

Shooting on a range is the skill of becoming steady enough that your nifty little machine can hit where you want it to. Trust us: Your gun is more accurate than you are.

Tactical shooting , and most handgun courses are based on tactical shooting, is the skill of crossing territory, possibly under fire, and getting accurate rounds on a target.

None of this is related to self-defense.

If you use proper stance and breathing and grip and sight picture when you shoot somebody, you are probably an assassin. Even combat shooters do not get all that. If you are using tactical movement and good cover to engage a threat, you probably should be using those same skills to get the hell out of there. Unless you are a military or SWAT sniper.

So what are the critical skills of self-defense shooting? Getting your weapon out and in play. Getting a round or two into a bad guy who is so close you cannot even really see him, while off balance, being knocked around and taking damage. Drawing the weapon and snapping off the rounds without shooting yourself. And, probably, immediate action skills because at that kind of range you can almost expect a semi-automatic to jam, since you will probably be touching the bad guy. At “normal” self-defense range, there is a real possibility that the muzzle blast will do more damage than the bullet.

The New York Police department did a comprehensive analysis of police-involved shooting incidents, evaluating some 6,000 violent altercations that took place during the 1970s. They found that officers hit their targets roughly a quarter of the time while criminal assailants made about eleven percent of their shots. This study dramatically demonstrated the effects of adrenaline. To look at it another way, highly trained professionals who nearly universally hit their targets in practice missed 75 percent of their shots during live fire situations. Criminals who presumably had far less experience handling firearms missed 89 percent of the time. Ninety percent of those shootings took place at distances of less than 15 feet. In fact, according to FBI statistics, 95 percent of officer-involved shootings occur at less than 21 feet, with approximately 75 percent taking place at less than 10 feet and a little over half at closer than five feet.

Many of the people who quote this study just assume that the degradation in skill is due to adrenaline. Many of these incidents were also by surprise and/or low light and/or with innocent bystanders nearby and/or on poor footing and/or under the conditions we have described, with a threat fully engaged in close-quarters battle. Fights happen in places, places (and conditions) that often affect the outcome.

These altercations happen fast, furious, and up close, oftentimes in grappling distance, so getting a sight picture can be awfully tough. Compounding this with adrenaline and adverse conditions, it is really easy to miss. This is where technology such as laser-aiming devices can sometimes be a help, assuming you can see where the dot lands anyway.

A major manufacturer came up with a neat idea, an integrated laser that’s perfectly aligned with the barrel (unlike competitors who have an offset that throws your aim off at ranges longer or shorter than where it’s been zeroed) and is easy to install without any specialized skill or tools. You swap out the slide release, pull out the guide-rod and spring, and replace them with the laser device. It takes maybe ten or fifteen minutes. Then you’ve got a brilliant aiming dot, one that’s visible in broad daylight, which could be a lifesaver in fast and furious encounters where you cannot use the weapon’s sights to target the threat.

Great idea, right? I thought so. So I bought and installed one. It worked great for a bit, but broke after less than 250 rounds on the first day I used it at the range. The ring at the laser-end cracked, skewing it out of alignment. At almost the exact same time, the battery cap broke loose and could not be reset properly, jamming the slide. This wasn’t a simple malfunction like a mis-feed or stovepipe that’s easy to clear; the weapon was rendered completely inoperative.

After fiddling with it for a bit I managed to get the slide to release. When I pulled it off the gun the battery cap popped out, flew four or five feet, and bounced another foot or two along the floor. I was able to find it easily enough, but could not get it to close and stay put after that.

Fortunately this all happened at the range. What if it had happened during an encounter where I’d needed the weapon for self-defense? Well, I’d almost certainly be dead right now. Yeah, DEAD. RIGHT. NOW. Because of the way the laser failed, the gun was rendered completely non-functional. Until the laser unit was removed and replaced with the original factory guide-rod and spring, it could not be fired.

No matter how well designed, mechanical devices fail. Clearly this one was defective to have broken so easily, but it illustrates how important it is to purchase quality equipment and maintain it in optimal operating condition. You must consider carefully any modifications you make to your weapon. If you replace vital components with aftermarket parts, even ones that are ostensibly upgrades, you may be asking for trouble.

One of the best ways to ascertain quality is to go to a range where they rent firearms and talk to the armorer there. While a normal person may only shoot a few hundred rounds a month, rental weapons can have upward of 30,000 shots per year run through them. If something is going to break due to use or abuse, armorers will likely know about it.

Consider a backup gun. Depending on the circumstances, it may be easier to abandon your primary weapon than to attempt to fix a problem during a fight, and draw a secondary firearm.

If you are going to carry a gun, you need to know the law in your area. You probably cannot legally carry a firearm into bars, schools, federal buildings, courthouses, and (potentially) a host of other places. You also cannot leave one locked in your vehicle in many jurisdictions. This means that you’ll have to plan your day carefully.

Shooting is a fine-motor skill. In your first encounter, training will only help up to a point, and even then not for most people. A good firearm is expensive. If you are going to become proficient with one, expect to spend a LOT more money on training and ammunition than you did on purchasing your weapon.

A lot of this is about cripples and corpses. About you creating them or becoming one. It’s not cool. It’s not heroic. It’s not like the movies. But you know that now. And hopefully you’re a bit better prepared.

“I study a complete martial art,” the young man said, with decided emphasis on the ‘complete.”
“Really? Because that, to me, would mean that you study everything from avoidance and communication up through firearms and at least small unit tactics.  We may just be defining things differently…”

We hope that if you take nothing else away, it is that conflict and violence are a very broad range of human behavior. The things that you may have to defend yourself against range from intimidation to murder and your appropriate defenses also must range from doing nothing skillfully to possibly taking a life.

(This excerpt is from Scaling Force: Dynamic Decision-Making Under Threat of Violence by Rory Miller and Lawrence A. Kane)