The Traditional Way to Celebrate Spring Festival or Chinese New Year | YMAA
Skip to main content
FREE Shipping Order Over $70. (US Only, Conditions apply)    |   Up to 20% Off. Exclusions apply. 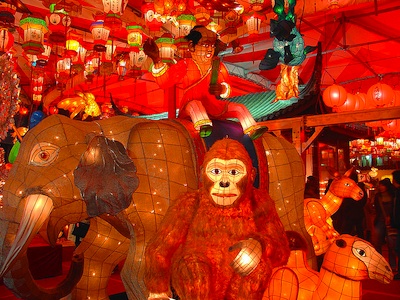 Daoist monk Zhou, Xuan-Yun grew up in a small village, Liu Gang Zu, in Henan Province with about 100 residents. The following are his memories and comments about the Spring Festival.

In brief, the Spring Festival comes on the first day of the Chinese calendar and lasts for almost half of a month. But in folk custom, this traditional holiday continues from the 23rd  day of the twelfth month to the 15th  day of the first month when the Lantern Festival is celebrated.  This is based upon the lunisolar calendar.

Among these days, New Year’s Eve and the first day of the New Year is the peak time of the festival. The exact days are different in every year according to the lunar calendar. For example, in the Year of the Snake 2013, the Spring Festival holiday is February 9-24 while in 2014, the Year of the Horse, will be February 1-7. In most of China and other Eastern countries the Gregorian calendar is used for day-to-day activities, but the Chinese calendar is still used for celebrating traditional holidays such as the Spring Festival.

“Keeping with the traditions of the festival, my immediate family celebrates the first two days together,” said Zhou.  “This would include my parents and two brothers. And then on the third day people started visiting other friends.”

“People in my village would make steamed bread as an offering to the kitchen god, Zao Wang Ye. They burn incense and leave the offerings out,” he said.

Customarily on this day, each household would replace the plaque of the god, Zao Wang Ye and his wife. This imagery is located above the stove or fireplace in the kitchen.  The wife is reported to write down everything that is said in the household over the year for her husband’s report to the Jade Emperor. This tradition is still widely practiced, and Zao Wang Ye is the most highly worshiped god of those who protect the household and family.

On the 22nd  day (Feb. 2, 2013) people kill the animals they are going to cook for the New Year. They burn incense and burn yellow paper as an offering to thank the spirit of the animals.

On the 24th  day (Feb. 4, 2013) people start cleaning. They sweep, wash the walls, floors, and all parts of the house. In a small village in China there are a lot of animals around, so things get dirty very quickly.

On the 26th - 28th days (Feb. 6-7 2013) people buy ingredients for the dishes they will cook and buy new clothing and get their hair cut.  In ancient times people used to buy traditional clothing.  But when I was a kid, and today people just buy regular clothing.

On the 29th  day (Feb 8, 2013) people start making steamed buns, and prepare the meat they will cook the following day.

On the 30th  day (Feb 9, 2013) In the evening everyone hangs up couplets on their door. These are short poems or prayers that they hang on both sides of their doors.

In the evening everyone goes to shower. Most people in my village, including my family, don't have running water, so the whole family takes a trip to a bathhouse together. Usually people in my village boil water and wipe themselves down with a washcloth—frequently in the summer, but not so frequently in the winter and fall—so a real shower at a bathhouse is a big treat. After the shower they all put on their new clothes.

Everyone eats dumplings that night. (It is safe to say that almost 99 percent of the Chinese people eat dumplings that night). In some places they make fried dough sticks. Before they eat they offer some of the food up to the gods and their ancestors (the spirits inside the house). If any relatives are buried nearby they go to the grave and light a candle or oil lamp there. They burn yellow paper and light incense and bow. This is the night most people watch the Spring Festival Gala. Before they had electricity in my village (they got it in 1989,) the villagers would all talk together and play cards. This is the biggest meal of the year. When I was a kid my family sold all of their animals at the marketplace, so this was the only time of the year that I ever ate meat.

At 1 a.m. in the morning the New Year officially started. People put offerings (steamed buns) for the spirits of the four directions and the spirit of the village well (the spirits outside the house). They set off fireworks—lots and lots and lots of fireworks—until the sun rises. Nobody sleeps and people go from house to house in the village visiting friends and relatives. Everyone bows to their parents and grandparents on this day, and the kids are given red envelopes of money. When I was a kid I would receive 1 yuan or .5 yuan. If you didn’t live together with your paternal grandparents, you would go visit them on this day.

On the 2nd day of the New Year, people would start visiting relatives that live further away. In Henan (which is still very traditional) they would go visit the mother's side of the family. It was the custom for to live with the man's family after marriage, so they see them regularly, while the woman's family was further away.

On the 3rd to 14th days, it was time to go visit other relatives such as great aunts and uncles, distant cousins, etc. Usually these visits involved the host to cook a really big meal. The adults would sit around and talk; men drank (and a few women, too) while the kids play together. Sometimes people drank a lot. The Chinese really enjoy drinking games. Then in the evening people would return home.

The 15th day (Feb. 24, 2013) is Yuan Xiao Jie - another holiday. People light lanterns (so in some places they call it the Lantern Festival). People light big fireworks (the ones up in the sky as opposed to the ones on the ground). In the South people eat food called Tang Yuan. It's dough filled with sugar that is boiled and eaten in a sugary broth. In the North they eat dumplings. Some people eat eggs. This is because of the symbolism of the round shape. In my village nobody had money for lanterns, but they did light fireworks.

In the temples the monks start on the December 23 (Feb. 3, 2013) with offerings to the kitchen god. There is a lot of scripture about the kitchen god they have to recite. On the 30th  day, the monks do a lot of chanting. There is a ritual that night where they chant through the night and then on the morning of the first, around 1am) the monks open the doors to pilgrims. The meals are usually a bit more special and everyone in the temple eats together in the refectory during the first week.