My Experience at The YMAA Retreat Center in Miranda, California Part 1 | YMAA
Skip to main content
FREE Shipping Order Over $70. (US Only, Conditions apply)    |   Up to 20% Off. Exclusions apply.

Home >> Articles >> My Experience at The YMAA Retreat Center in Miranda, California Part 1 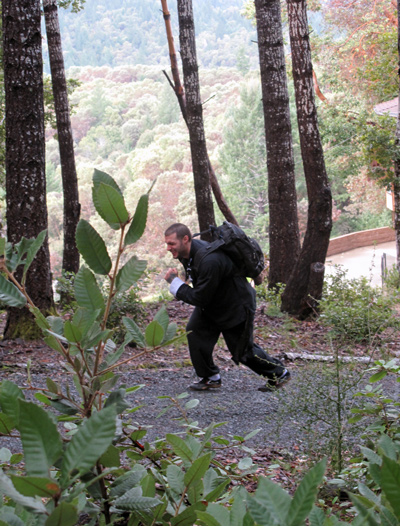 My Experience at The YMAA Retreat Center in Miranda, California Part 1

It was a quiet Monday morning in Bronx, N.Y. at 5 a.m. when I made my usual stop at the deli by the local train to New York City. Out of the corner of my eye, I spotted the former UFC Lightweight Champion, Frankie Edgar, alongside the Bellator Lightweight Champion, Eddie Alvarez, featured on the cover of Black Belt Magazine.

It was a quiet Monday morning in Bronx, N.Y. at 5 a.m. when I made my usual stop at the deli by the local train to New York City. Out of the corner of my eye, I spotted the former UFC Lightweight Champion, Frankie Edgar, alongside the Bellator Lightweight Champion, Eddie Alvarez, featured on the cover of Black Belt Magazine.

While reading the magazine on the way to class, I came across an article on Chinese Kung Fu at the YMAA Retreat Center. The article, “Living The Martial Way" by Robert W. Young, featured Dr. Jwing-Ming Yang. It was exceptionally entertaining and exciting for me to read the detailed article and paint a mental picture of disciples, living and training Taijiquan, Kung Fu and Qigong, eight hours a day, six days a week. They were living in the mountains the martial way, as they did in ancient times in Northern and Southern China. This compelled me to further research Dr. Yang. I found myself on his web site reading about the 10-year live-in program he runs. Further research led me to Dr. Yang's 30 plus books and over 80 YMAA DVDs currently in the marketplace. My next encounter with YMAA was at the martial arts supply store, where I purchased Dr. Yang's Kung Fu Body Conditioning DVD. I was instantly hooked on the insane drills and the hardcore training of the disciples at YMAA.

After a few detailed e-mails and calls with Dr. Yang and with the support of my wife and family, I booked my trip to train with him and his disciples. Before I knew it, I was on my way to California. While waiting for my connecting flight, I met up with Dr. Yang who was returning from one of his Boston seminars. The funny thing is, as soon as I met Dr. Yang, his first words to me were "Hello, I hope you are ready for Boot Camp.  Now go grab something to eat before we board the plane." I remember thinking to myself "I hope I can survive this Kung Fu Army-style training."

I also meet Tye Tonkin, another monthly guest from Vermont, who was traveling with Dr. Yang. Together, we all boarded the next plane and landed in Eureka/ACV airport just over an hour later. We were picked up by Dr. Yang's disciple, Javier Rodriguez, in a blue Dodge truck. We then drove to several supermarkets and did a huge food shopping trip. Then we drove an hour and half to Miranda and by the time we were finished, I had made fast friends with Dr. Yang, Javier, and Tye.

It's a long journey from the overcrowded streets of New York City to the mountains of Miranda. The small-secluded town in Humboldt County, California, has a tiny population of 350 residents. During the car ride to the center, the huge redwood trees and mountain scenery amazed me. I was amused at how funny and down to earth Dr. Yang was. I was truly comfortable with him and did not have to conduct myself with caution, or as Dr. Yang would say, "with a mask."

We arrived at the center around 7 p.m. and were right on time for dinner. I was greeted and introduced to the disciples as we put away the groceries. At our first family style dinner together, Dr. Yang asked me in front of everyone, "Would you like to be treated as a guest or a disciple?" I answered, "Dr. Yang, as a disciple". Dr. Yang replied with his classic Chinese accent, "Well then, if you don't follow the rules and if you're late for training, I’ll give you spanking like a disciple. Meditation is at 6 a.m. sharp tomorrow morning so get some sleep so you can recover and do not be late!" Before I knew it my alarm was going off in the cabin at 5:30 a.m. so I stretched while I waited in the main house for the morning session. Dr. Yang came downstairs and made tea, as he did every morning.

Little did I know I was in for some rigorous training at Dr. Yang's Kung Fu Boot Camp facility. We started with seated meditation until 6:45 a.m., directly after that we did a routine drill of external recovery stretching, self-pressure points massage, Buddhist meditation chanting and a set of hand speed drills. We finished with one set of speed fighting drills and continued with ten minutes of body stretching to further warm up. Depending on what day of the week it was, we would continue with either White Crane Qigong, tumbling or Yang Style Taijiquan until 8 a.m. We would then take a break and go to the cabin for breakfast. The disciples and guests would gather together in the kitchen to eat whatever they desired until training resumed from 9-11 a.m.

Depending on what day of the day of the week it was the curriculum would either be Weapons Training, White Crane Gong Fu, Martial Applications, Chin-Na or Shaolin Long Fist. Much to my disbelief, I found myself feeling like I had never trained Kung Fu or Taijiquan before. My body had became accustomed to the stances and conditioning of Shaolin Kung Fu, Chen Style Tai Chi Chuan and Chinese Kung Fu Wu-Su. The similarities between Shaolin Kung Fu and Shaolin Long Fist are more like distant cousins.

However, the twenty five percent difference between the stances, kicks and punches left me with the same soreness I had experienced as a beginner. Training Yang Style Taijiquan and White Crane Qigong/Gong Fu was also like starting from the beginning, but I managed to weather the storm as best as I could, utilizing heart and sheer will power. At noon we had Chinese class or media work to do with Dr. Yang. I would usually watch one of his training DVDs to sharpen the form or movement I was currently learning at that time.

From noon to 1 p.m., we would break to cook lunch which varied depending on whose turn it was to cook. We cooked in teams of two and everyone at the facility cooked in daily shifts. One thing is for sure; multi-cultural quality food is always made in abundance at the YMAA center. If you're on a special diet be prepared to cook for yourself if you don't eat a wide variety of proteins. The long hours of intense training make you very hungry for lunch and afterward we would take a rest break.

From 2-6:30 p.m. is what I call "The Hell on Earth Cycle" led by disciple Jonathan Chang. I jokingly nicknamed Jon, "The Commander," in relation to his intense military style workout drills. This is where Kung Fu Body Conditioning took place. Wearing 50-pound weight vests, we walked all the way down the steep decline from the top of the mountain, all the way to the bottom, where the mountaintop meets the beautiful creek.

Once we made it all the way down, we had to run all the way back-up the heavy incline to the top of the mountain. Fire flowed through my lungs as I made my way back up to the top. While the quickest completion time ever recorded was 12 minutes I was happy to achieve my personal best of 15 minutes. We were always in the company of my good friend Xiao Hu, which means “Little Tiger” in Chinese. He is the YMAA dog that watched over us in the woods and always made the demanding trip down and back-up the mountain with us.

When we arrived back on top of the mountain, we immediately started a drill of jumping on and off the guardrails of the deck. When the 16-minute timer rang, we started to stick speed train for hand/arm conditioning. From there it was, push-ups, sit-ups, panther walks, several military style work out drills, rope climbing to the top of a 40-foot tree, walking on short tree stumps for balance, walking across crisscrossed horizontal tree logs for balance, as well as an obstacle course of high horizontal logs tied high up in the trees, much like walking the tight rope on skinny tree logs, followed by a horizontal rope climb from one tree to another. After balance training, we did arm conditioning by hitting our arms against tree posts. 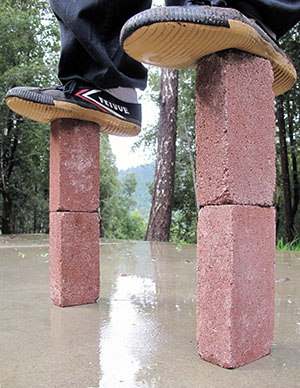 After arm conditioning we flipped on the giant trampoline, then switched over to pull ups and dips on the bars. We usually ended with cinder block tossing or rooting. I was good at cinder block tossing even though initially I hurt my hands. Rooting is standing on one, two or even three bricks stacked up vertically. We would do this for ten minutes and incorporate White Crane Qigong movements. Occasionally we ended with Shaolin Long Fist, White Crane Gong Fu, or Qigong candle training, or Tai Chi Ball training.

From 6:30-7 p.m. Dr. Yang held a question and answer session while the assigned cooking team cooked for a 7 p.m. dinner. Every third day, we would retire to the sauna to relax and steam our sore muscles for an hour or so before bed, which I found totally rejuvenating. The sauna was a great relief to the body, which helped me sleep like a baby. We went in large groups and shared stories of our life in the outside world, usually laughing the whole time. Sundays was our only full day off. We usually watched a movie after dinner since there is no TV or YouTube allowed at the facility.

Learn more about visiting Dr. Yang and training at the YMAA Retreat Center