From Whence We Came: Some Okinawa Cultural Icons | YMAA
Skip to main content
FREE Shipping Order Over $70. (US Only, Conditions apply)    |   Up to 20% Off. Exclusions apply.

Home >> Articles >> From Whence We Came: Some Okinawa Cultural Icons 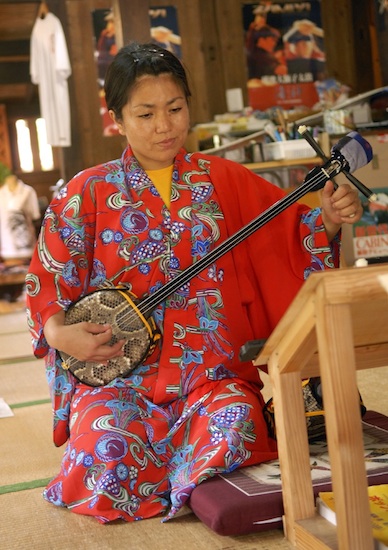 From Whence We Came: Some Okinawa Cultural Icons

At a little over 26 degrees north of the equator, Okinawa enjoys a subtropical climate, and for much of the year its inhabitants live under clear blue skies. However, during the early summer months, typhoons sweep in off the Pacific Ocean bringing with them strong winds and huge seas often resulting in damage to property, and sometimes loss of life.

The older wooden houses, still found in small pockets of undeveloped Okinawa, are characterized by their heavy tiled roofs, which anchor the buildings to the ground when the winds become strong enough to knock people off their feet.

Okinawa island (jima) lies roughly midway along the Nansei archipelago, and is by far the largest of the forty-eight inhabited islands that run in a chain of one hundred and sixty islands stretching from the southern tip of Kyushu (considered part of mainland Japan) all the way to the northern tip of Taiwan. With an overall population of approximately one and a quarter million people, the largest city and the prefecture’s capital is Naha, a city that is home to more than three hundred and sixteen thousand people.

Densely populated in the south, the island of Okinawa reveals more of its natural beauty as you travel north. Once you get past the sprawling American military bases and the satellite towns that dominate the lower one third of the island, a quieter and gentler way of life is revealed. Although famous these days as the home of karate, the Okinawan culture is rich in its diversity; today its music, textiles, language, ceramics, and architecture, all unique to the ancient kingdom of Ryukyu, still lie waiting to be discovered and experienced by those lucky enough to travel there.

Since my first visit to Okinawa, in February 1984, I have returned many times to learn karate from my teachers and to soak up the atmosphere and culture this unique society has to offer. Okinawa may be a political and economic part of Japan these days, but the people and their history tell a very different story from that of Yamoto. I believe the study and practice of karate loses much of its value if you remove it from the cultural environment it evolved in; and while it would be a mistake for foreigners like me to pretend to be Okinawan, it is nevertheless important to develop a level of empathy for the culture.

For those who do not yet have a personal experience of Okinawa, I want to introduce here a few of the cultural icons. Becoming familiar with them will help you place karate in its correct historical and cultural milieu. Although the Ryukyu Kingdom has long since slipped into history, this southernmost modern prefecture of Japan continues to stand apart from the rest of the country; separated by the remnants of a different language and culture, its people still remain imbued with a powerful sense of being Uchinanchu—a native Okinawan.

You only have to listen to the music of Okinawa for the briefest of moments to notice the difference between it and the music of Japan; and even though the drum plays a pivotal role in the sound of the island, and other instruments too, like the sanba (similar to a Spanish castanet, but with three pieces of wood instead of two), it is the sanshin (a three stringed banjo-like instrument) with its instantly recognizable twang that best captures the spirit of the ancient Ryukyu Kingdom. With its slow and melodic strumming, often accompanied by an even more solemn vocal delivery from the player, the music can evoke all kinds of images.

From the oppressive heat and humidity of summer to the cooling winds blowing gently in off the East China Sea, the sanshin can portray each with equal subtlety and intensity. Love songs and songs to work by in the fields or on the tiny fishing boats are all sung with the sanshin providing a jaunty rhythm by which the islander’s dreams and toil are celebrated.

The instrument is said by legend to have been invented by Akainko, a musician who lived long ago. Sheltering from the rain one day, he began to notice the sound of the water dripping from the roof. He set about making the very first sanshin (san—three, shin—string) soon afterward and began traveling from village to village giving impromptu performances. His music became so popular among the people that even the royal court began to hear of it, and from that point on the sanshin began to be played for the king himself.

As wonderful as this story sounds, the reality is somewhat less romantic. Historians believe the sanshin came to Okinawa from China as a slightly bigger instrument called a sanxian; the Okinawans then adapted it into the smaller sanshin we see today. Not to be confused with the Japanese shamisen, which the Okinawan instrument predates, the strings of the sanshin are picked, using a plectrum, or bachi, which is traditionally made from the horn of a water buffalo.

Drumming too is a major part of the traditional music of Okinawa, and during the summer months huge gatherings called eisa are held in various locations. Eisa are said to date back at least four hundred years and to have evolved from Buddhist inspired dances performed by young people during the Bon Festival, a time each summer when the spirits of the dead return to the earth to visit their families. These days there are around a dozen eisa held each year in various locations from Tomigusuku in the south to Nago in the north. With literally hundreds of drummers and dancers taking part, eisa make for a spectacular sight, as well as an incredible sound, and are an important part of the Okinawan culture.

The movements of the mass drummers often resemble the embusen of karate kata, and the stances they adopt leave you in no doubt that many of the Okinawan traditional dances seen at such celebrations and karate share a common heritage. It is this heritage that I strive to tap into while practicing my karate; for to do otherwise, I believe, would produce something else other than the feeling for karate I am trying to find. I struggle each day to make karate my own, while maintaining elements of the culture from which it came.

Okinawan music, like all other music, can evoke feelings and emotions that you may otherwise never tap into. It provides the soundtrack to a society that gave birth to the art of karate, an art I have spent the greater part of my life studying. In the early morning, when my personal training is over, I often sit quietly and listen to CDs of the sanshin, allowing its rhythms to wash gently over me as I recall moments of happiness and struggle during my visits to Okinawa.

I once heard an archaeologist explain the difference between artifacts that were brought to him by someone else and objects he discovered himself.

“The first,” he said, “was nothing more than an interesting find, something that could tell me little other than what was in front of me. Whereas, when I discover something in the ground for myself, I not only learned about the object itself but the circumstances under which it was used. I can pinpoint its age and sometimes even how it was made. I can even get an understanding of when it had been discarded. From the location of the find, I can often work out the climate at the time the object was in use, and therefore what the location looked like when the object was made and being used by its original owners. By understanding the object in relation to its surroundings my knowledge of it becomes clearer and my appreciation of it much deeper.”

As I listened to him speak, it dawned on me that the same was true of karate. If you remove it from its cultural context, you are left with an interesting set of movements that tell you little of their original use. You are left with a set of fighting techniques that say nothing of karate’s value to either the individual or society as a whole and provide little or no practical method of protecting yourself from the sometimes harsh realities of life. Karate, once removed from the culture from which it came, becomes something entirely different. Some may think the difference an improvement: I would always disagree.

The above is an excerpt from Shin Gi Tai—Karate Training for Body, Mind, and Spirit by Michael Clarke.