The Ground. The Dirty, Filthy, Dangerous Ground | YMAA
Skip to main content
FREE Shipping Order Over $70. (US Only, Conditions apply)    |   Up to 20% Off. Exclusions apply. 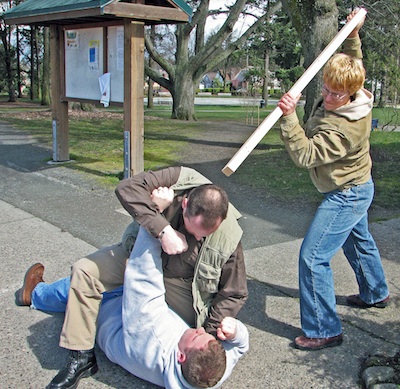 The Raiders fan had biceps that could put Hulk Hogan to shame and a physique that was nothing short of awesome. He stood out in a bar full of average guys, not only because he was ripped, but also because he was the only person cheering for the other team, the only one doing it vociferously anyway.

The Raiders fan had biceps that could put Hulk Hogan to shame and a physique that was nothing short of awesome. He stood out in a bar full of average guys, not only because he was ripped, but also because he was the only person cheering for the other team, the only one doing it vociferously anyway. For most of the first quarter, Seahawks fans bantered good-naturedly with the Raiders fan, but as the Seahawks struggled, the chatter turned to insult that in turn became vitriolic.

I didn’t hear what set off the Seahawks fan, but suddenly he stood up and hurled a half-full beer bottle at the Raider fan, who kicked his table aside and charged his assailant. Ducking a wild punch, he scooped the Seahawks fan’s legs, planted his shoulder into the other guy’s gut, and drove forward. It was a sweet take down. The Raider fan clearly had some type of martial arts experience. In seconds, they crashed to the ground with the Raider fan on top. Sitting astride his stunned adversary, the Raider fan threw a flurry of blows into the smaller guy’s face. He seemed to be enjoying himself, right up to the point where one of Seahawks fan’s friends kicked him in the head. Moments later, the Raider fan was curled on the ground in a fetal position as a half dozen Seahawks fans put the boots to him.

It was a sports bar with no bouncers, and with no one to break things up, the beat-down would have continued if we had not waded in, calling out that the Raider fan had had enough. The implication was that he had learned his lesson.  When they finally let off the Raiders fan, he lay eerily still. Several minutes later, when the paramedics strapped him onto a backboard and wheeled him out to the waiting ambulance, he still hadn’t moved.

The cops spent most of the second half of the game taking statements and making arrests.

The ground is a precarious place to fight. That’s common sense, right? You are a mobility-impaired target that can easily get stomped or kicked and, if all goes poorly, become maimed or killed. Even politicians intuitively know that a maiming or killing can happen in the case of a downed opponent. That is why our statutes and courts levy severe punishments for doing anything that crosses this legal line.

For example, in Florida on March 17, 2010, a Deerfield Beach High School student, Wayne Treacy, age 15, was charged with attempted murder for attacking eighth-grader Josie Lou Ratley. The assault took place on the campus of Deerfield Beach Middle School, where Treacy is reported to have knocked Ratley to the ground and kicked her in her head with a pair of steel-toed boots that had belonged to his older brother. She suffered brain damage during the fight, was rushed to Fort Lauderdale hospital, and placed on life support. Two weeks later, she still could not breathe on her own, and while she eventually recovered she still suffers from irreversible brain damage.

Newspapers reported that Treacy told a sheriff’s detective that he committed this act of violence in retaliation for several text messages that the victim allegedly sent him earlier in the day in which she allegedly made fun of his deceased brother. Treacy’s brother committed suicide the previous year. Treacy found him hanging from a tree outside a Pompano Beach church in October.

Justice may be blind, but it’s rarely swift. At the age of 18, Treacy was sentenced to twenty years in prison for the assault he had committed three years earlier. He reportedly faced a maximum of fifty years for his crime, but his punishment was reduced due to evidence that he had suffered from mental illness, claiming in court that post-traumatic stress disorder, depression, and thoughts of suicide brought on by dealing with intense grief over his older brother’s suicide were mitigating factors. Nevertheless, in their findings, the jury considered the boots he wore were deadly weapons and punished him accordingly.

Boots are deadly weapons? You betcha. When used to assault another person, especially when the victim is lying on the ground, footwear is virtually always classified as a weapon. More specifically, it can either be seen as a deadly or dangerous weapon in the eyes of the law, the distinction typically being that items purposefully designed to harm others (e.g., knives, guns) are “deadly” whereas those that could be used as in an impromptu manner (e.g., bottles, boots) are considered “dangerous.” Such designations vary by jurisdiction, with steel-toed boots falling into either category depending on where and how they are used.

These laws vary, as do the associated penalties. In Michigan, for instance, a person who stomps a downed victim will almost certainly find himself or herself facing the charge of “assault with intent to murder” regardless of what type of footwear he or she was wearing at the time of the attack. This charge falls under the category of a capital offense, meaning that the sentence for conviction could be as harsh as life in prison, just for kicking a fallen opponent. In the state of California, the largest of the United States by population, the laws are very clear that a deadly weapon is classified as something that is not intrinsic to the human body, so boots (especially steel-toed ones) used in the commission of a crime meet this definition and are prosecuted accordingly.

In these aforementioned examples, you can see that attacking a person on the ground is viewed very seriously throughout the United States. The folks who wrote the laws may not have been martial artists or experts in self-defense, but they know enough to realize that a person lying on the ground is in a very precarious position. He or she faces serious odds when striving to stave off an attack. Regardless of who started the altercation, in the eyes of the law, once the other person hits the ground the fight is over.  Consequently, any offensive action you take against a “helpless victim” in this circumstance is prosecuted in the most stringent and strident manner the law can muster.

When you hit the ground, bad things are likely to happen to you. It could easily be an assault by one individual in a dominant position that you struggle to defend against or it could be worse. The task of defending yourself against a group of people while lying on the ground is utterly impossible unless you are strong, fast, and very skilled. In an incident widely publicized across the web Georgia teenager, Bobby Tillman was beaten, knocked to the ground, and stomped to death outside a party in the Douglasville on November 6, 2010.

According to reports, the event started out as a small gathering among friends, but as word of the party spread via texts and emails, roughly 80 people showed up. Parents supervising the party told folks to leave, but as partygoers spilled out into the streets a couple of girls allegedly got into a fight and hit a boy during the altercation. That boy did not retaliate against the girl who hit him, but was overheard saying he was going to “beat down” the next guy who walked by. Unfortunately that was Tillman, a 5-foot-6 inch, 124-pound, 18 year old. The beating, led by four teenagers who were later arrested, lasted over a minute with dozens of bystanders watching as events played out. While Tillman was still alive when deputies arrived, they were unable to save his life.

If you stomp on someone you are likely to face serious charges. If convicted you will do hard time. If you get stomped by someone … let’s just say that’s not likely to end well. The ground is a precarious place to fight.