The Writing of The Raven’s Warrior-A Novel | YMAA
Skip to main content
FREE Shipping Order Over $70. (US Only, Conditions apply)    |   Up to 20% Off. Exclusions apply.

Home >> Articles >> The Writing of The Raven’s Warrior-A Novel 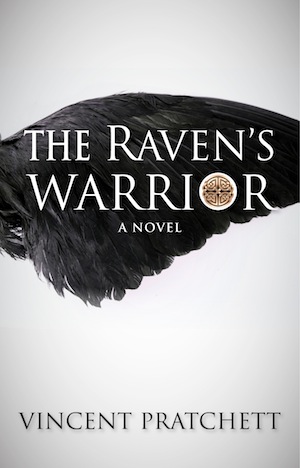 The Writing of The Raven’s Warrior-A Novel

We share a common interest – martial arts. That interest however, is as unique as every individual who has trained and sweated through any art pursued. We bring a modern western perspective to an ancient eastern discipline.

We share a common interest – martial arts. That interest however, is as unique as every individual who has trained and sweated through any art pursued. We bring a modern western perspective to an ancient eastern discipline. For me, the very first time I entered the dojo a new world opened up. The bowing, the white gi and the white belt I tied it with, the foreign names of the martial technique I learned, all took me to a place far different from the neighborhood I grew up in. Almost inevitably, the student at some point will turn their attention to the origins of their endeavor, both personally and historically. It is this understanding that provides the strongest foundation of who we are, and what we do.

At the University of Guelph, I took a course in Chinese history, and felt once again that sense of wonder. In the library I poured over volumes of books on the science and technology of ancient China. This vast empire, isolated from the rest of humanity, developed and produced inventions and innovations that made the rest of the known world seem a very primitive place. The European world of A.D. 900 was a harsh environment. Ireland was regularly besieged by Viking raiders. Life in many places was as simple as defend or die. In contrast, China at this time was flourishing.

The Chinese had weapons of steel, while the rest of the world wielded iron. Confucian, Taoist, and Buddhist doctrine formed the basis of their unified society. They had the compass while all others navigated by wind and star. Theirs was a working cosmic understanding of the earth and the universe, while for the rest of humanity the world was still quite flat. Advances in medical theory, arts and literature, paper and printing set them apart. It was here that the discovery of the destructive power of a volatile black powder would change the nature of war for centuries to come.

I have always been a writer. I was born with an Irish soul. Inherent in this culture is a deep love and respect for both the written and spoken word. How these words come together to form stories is really the heart of the magic and the enigmatic beauty of creation. Within my family I was taught that stories surround the tellers silently like the air that they breathe. Their gift is to listen and to record, to bring tales from the ether, and give them voice. As one raised in Canada, I was skeptical, but now that The Raven’s Warrior is finished, I don’t think that this explanation is without merit.

The stage was set.

In my mind’s eye I could see and hear the savage warrior of my ancestral land dropped into the advanced civilization that was theirs. The writing of the novel began with the first sentence. It came to me as soon as I sat with pen and paper. With the first complete thought inked onto paper, the process of listening and recording was underway. Like the successful application of a martial technique, writing this novel was simply creativity drawn from the heart of chaos.

A man sees the world through the eyes he has been given. The wounded Celtic prisoner of war ripped from his homeland, is liberated by a priest and his daughter in the land called China. For him, hazy images of silk, steel, herbal potions, and healing needles, can lead to only one conclusion, he has fallen into the hands of a wizard and his witch, and Arkthar fears for his very soul. Although the grueling physical journey is over, his spiritual journey has just begun. Under Death’s plotting eye, a warrior, a priest, and a healer embark on a quest to save a kingdom. I hope that a martial artist will enjoy reading it as much as I have enjoyed writing it.

Every man’s life story begins at first breath, but this is not my story alone, and so it begins much closer to my last.

I soar in effortless circles around the plodding caravan far below me, gently riding the desert winds. It is not the glitter of sunlight on jewels that attracts me, for I do not covet the spoils of war, but crave only my humble share of war’s terrible outcome.   The hot rising air is cradled beneath the feathers of my outstretched wings, and carries with it the tantalizing odor of sand and blood. I fly on, driven by primordial hunger and beckoned by the smell of death. Drawn closer now, I am intrigued, for I have found its source.

I can see him clearly. He is chained behind the cart laden with plunder and pulled by great horned oxen. He jerks and stumbles forward at every tug of the cattle’s methodical steps. Blood is the clothing that covers his body. Wounded and tortured, decay did not wait politely for death’s cue, and the flies have already joined the feast.

My spirit knows that this cruelty is the work of men, nature is much more merciful. I can see that the dying captive is mad. He raves with agony and fever at every near fall. Nature mercifully has removed mind from body, so his mind knows nothing of its body’s plight or pain, and by nature’s mercy I sense his journey will soon be over.

But that time has not yet come, and I fly upwards towards the heavens to banish my gloom. As clouds part and early stars move slowly before my eyes, I bite and savor simple concepts, tasting the timeless comfort of universal truths. With pain and blood they are born, they live, create life and take life, and then with blood and pain they leave through Death’s cold gateway. It is Death’s black finger that puts the final punctuation at the end of every man’s life sentence.

It was then that I heard Death laughing, and when he had finished his chuckle he began to speak. “I have heard the delirious ramblings of countless dying minds. I am amused by yours. Heavy philosophy to hapless metaphor, ‘my black finger puts the final punctuation at the end of every man’s life sentence?’ That is very funny given your circumstance. Fly down with me to see the wretch again.” As we flew lower Death continued to speak.

“Many times in many battles I came to take him, but he was elusive and agile. Even though I couldn’t reach him, he did my work well and sent me many. Did you know I have whispered to him every step of his journey and still he will not come? Yet even if he does not die along the way, he knows I wait to embrace him at the executioner’s block. Why does he resist?”

We angled closer to the man as he continued. “I know this unreasonable tenacity is testimony to the power of life and creation, and to feel life’s pulsing strength is a new experience for me, an experience for which I will always be grateful.” We flew closer still, and hovered. The stench was intoxicating. I saw the war prisoner’s wild eyes, and in a heartbeat ravenous euphoria was replaced by terror.

I saw and understood that this smell of what was once a man was me, and in panic I began falling from the sky. Death steadied me, “Do not be afraid,” he said as I plummeted towards myself. “I came once more to take you, but I am in your debt. You have challenged me, aided me, helped me hear life’s song, and finally you have even made me laugh. ‘My black finger puts the final punctuation at the end of every man’s life sentence,’” and his laughter began all over again.

We had begun the final dive of a bird of prey. There was no turning back. We were very close and flew very fast, faster than the speed of reflex. For me there could and would be no stopping. A wing tip away from impact, he flashed his final words. “No punctuation yet, your life sentence has just begun.”

Instantly my world blazed white.  Like the coals of a forge it cooled, sinking steadily through a sea of red and orange. Finally it settled into the black cold depths of the night, from where I emerged and moved as a man once more.

The fever had broken. The heat and redness around the wound still remained, but my arm no longer ached at every passing heartbeat. The blood that had seemed unstoppable had slowed to a trickle and had cleaned the wound as best it could. Dead flesh was gone, and the children of the flies had also vanished. A mind forced away by the body’s anguish has returned to its temple to worship at its altar of bearable suffering once again.

I had survived, I had begun to heal, and I had forgotten everything that Death had said to me.