Home >> Articles >> What is Taijiquan? 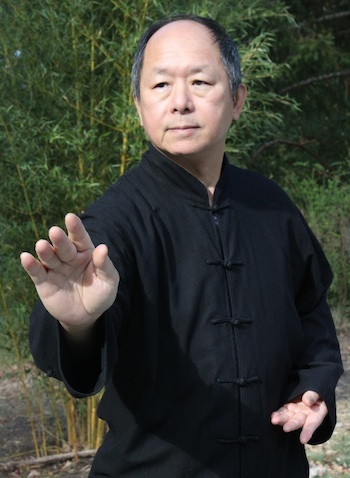 Let us see what is Taijiquan, as it was written down in the past. First, we must define what we mean by “taiji.” It is stated in Wang, Zong-yue’s (王宗岳) Taijiquan Classic “What is taiji? It is generated from wuji and is a pivotal function of movement and stillness. It is the mother of yin and yang. When it moves, it divides. At rest it
reunites.”

Let us see what is Taijiquan, as it was written down in the past. First, we must define what we mean by “taiji.” It is stated in Wang, Zong-yue’s (王宗岳) Taijiquan Classic

“What is taiji? It is generated from wuji and is a pivotal function of movement and stillness. It is the mother of yin and yang. When it moves, it divides. At rest it reunites.”

According to Chinese Daoist scripture, the universe was initially without life.  The world had just cooled down from its fiery creation and all was foggy and blurry, without differentiation or separation, with no extremities or ends. This state was called “wuji” (無極) that literally means no extremity, no dividing, or no discrimination.

Later, the existing natural energy divided into two extremities, known as yin and yang. This polarity, or tendency to divide, is called taiji, which means grand ultimate or grand extremity, and also means very ultimate or very extreme. It is this initial separation that allows and causes all other separations and changes.

From the above, you can see that taiji, which is derived from wuji, is not yin and yang but is instead the mother of yin and yang. How then do we interpret and define “grand ultimate” as the characters for which taiji is usually translated? And how can we apply this concept to taijiquan practice? Let us turn to the beginning movement of the taijiquan form for an illustration that reveals the answers to these questions.

Taijiquan is Art of the Mind

When you stand still, before you start the sequence, you are in a state of wuji, that is, a state of formlessness. Your mind should be calm, quiet, peaceful, and centered. Your mind, and hence your qi, should focus at your energetic and physical center, i.e., your lower dan tian or center of gravity. Your body is relaxed, with no intention. Your weight is evenly distributed on both legs.

However, once you generate the intention to start the sequence and you begin to move, you are in a state of taiji (i.e., yin and yang start to be differentiated to perception). As the form continues, you shift from side to side, from foot to foot, and each part of your body becomes at times alternately substantial and insubstantial. The taiji in the taijiquan form is thus actually the intention or the motivation generated from the mind that causes the yin and yang to be discriminated. It is this mind that shapes reality. It is this mind that guides us to a deeper and more profound understanding.

And it is this living and active mind that continues to achieve further perceptions of yin and yang. From this, you can see why taiji is called “grand ultimate,” and why the mind is the Dao in taijiquan practice. Therefore, taijiquan is primarily an art of the mind.

Through the mind’s action, the entire art becomes alive. Once you start a motion it is possible to modify or redirect it, but this modification is possible only after the motion has been started. If one change is made, others can be made, and each change opens up other possibilities for variation. Each factor in the situation introduces other factors as possible influences. The initial motion made all other motions possible, and in a sense “created” the other motions. The Chinese express this by saying that taiji is the mother of yin and yang: “Taiji begets two poles, two poles produce four phases, four phases generate eight trigrams (gates), and eight trigrams initiate sixty-four hexagrams”

The yin and yang theory is used to classify everything, whether ideas, spirit, strategy, or force. For example, female is yin and male is yang, night is yin and day is yang, weak is yin and strong is yang. It is from the interaction of all the yin and yang that life was created and grew. Taijiquan is based on this theory and applies it to form, motion, force, and fighting strategy. In the thousands of years since the taiji theory was first stated, many taiji symbols have been designed. The best one for both theory and application is a circle that contains yin and yang. In this figure, the circle and the curved dividing line between yin and yang imply that both yin and yang are generated and contained in roundness. The smooth dividing line between yin and yang means that they interact smoothly and efficiently.

Extreme yang weakens and evolves into yin, first weak and then extreme yin. Extreme yin, in turn, evolves into yang. One evolves into the other and back again, continuously and without stopping. The diagram also shows a small dot of yin in the center of the greatest concentration of yang, and a little bit of yang inside the greatest concentration of yin. This means that there is no absolute yin or yang. Yang always reserves some yin and vice versa. This also implies that there is a seed or source of yin in yang and of yang in yin.

Taijiquan is based on this theory, and therefore it is smooth, continuous, and round.
When it is necessary to be soft, the art is soft, and when it is necessary to be hard, the art can be hard enough to defeat any opponent. Yin-yang theory also determines taiji fighting strategy and has led to thirteen concepts which guide practice and fighting. Thus, taijiquan is also called “thirteen postures.”

The eight postures are the eight basic fighting jin patterns of the art and can be assigned directions according to where the opponent’s force is moved. Peng (wardoff) rebounds the opponent back in the direction he came from. Lu (rollback) leads him further than he intended to go in the direction he was attacking. Lie (split) and kao (bump) lead him forward and deflect him slightly sideward. Cai (pluck) and zhou (el-bow) can be done so as to catch the opponent just as he is starting forward, and strike or unbalance him diagonally to his rear. Ji (press or squeeze) and an (press down, forward, and upward) deflect the opponent and attack at right angles to his motion. The five directions refer to stance, footwork, and fighting strategy. They concern the way you move around in response to the opponent’s attack, and how you set up your own attacks.

Since ancient times, many taiji masters have tried to explain the deeper aspect of these thirteen postures by using the eight trigrams and the five elements. In order to find a satisfactory explanation, various correspondences between the eight basic techniques and the eight trigrams, and also between the five directions and the five elements have been devised. Unfortunately, none of the explanations are completely reasonable and without discrepancy.

In addition to the thirteen postures, taijiquan is also commonly called soft sequence (mian quan, 綿拳). This is because when taiji is practiced, the forms are soft and smooth, the mind is calm, the qi is round, and jin is fluid. Taijiquan is also called Long Sequence (Chang Quan or Changquan,長拳). Zhang, San-feng’s Taijiquan Treatise states:

What is Long Fist [i.e., Long Sequence]? [It is] like a long river and a large ocean, rolling ceaselessly.

Originally, the name “Changquan” came from the Shaolin Temple. Changquan means Long Fist. It can also be translated as Long Range or Long Sequence. Ancient documents suggest that the meaning of Changquan in Taijiquan means the Long Sequence like a long river that acts as a conduit to the open ocean, which also means that when taiji is practiced, the forms flow smoothly and continuously. The qi flow is smooth and continuous, and the jin is unbroken. There is another martial style also called Chang Quan. However, this Shaolin style should be translated as Long Fist because it specializes in long-range fighting.

(This is an excerpt from Tai Chi Chuan Classical Yang Style by Dr. Yang, Jwing-Ming)