The Evolution of Tae Kwon Do Poomsae, Hyung and Tul-Part 1 | YMAA
Skip to main content
FREE Shipping Order Over $70. (US Only, Conditions apply)    |   Up to 40% Off. Exclusions apply.

Home >> Articles >> The Evolution of Tae Kwon Do Poomsae, Hyung and Tul-Part 1 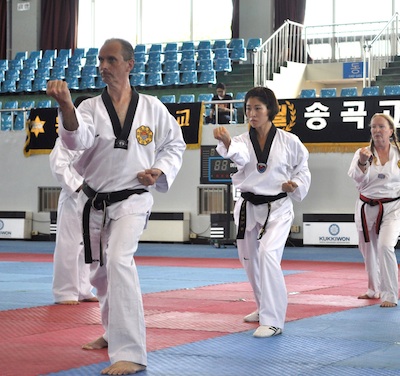 The Evolution of Tae Kwon Do Poomsae, Hyung and Tul-Part 1

Long before the advent of sport sparring and the invention of modern safety gear, in a time when to fight meant to defend one’s life from almost certain death an ingenious method of transmitting martial arts skills from venerated master to loyal disciple was developed.

Long before the advent of sport sparring and the invention of modern safety gear, in a time when to fight meant to defend one’s life from almost certain death an ingenious method of transmitting martial arts skills from venerated master to loyal disciple was developed. Legend has it that experienced warriors returning unscathed from combat, a testimony in and of itself to their martial prowess, mimicked techniques used to vanquish opponents on the field of battle for the benefit of those less qualified in the ways of war. This ritual may have been practiced around a campfire, in secret gardens or in the incense-filled halls of ancient Buddhist temples lending credence to the notion that the dynamic practice of formal exercises has existed for centuries. Several examples demonstrating this concept can be traced back to antiquity with roots found in primitive works of art and ancient yogic postures originally intended to promote health and core strength in sedentary clerics.

Today, poomsae, hyung or tul—all culturally specific terms for Korean martial arts patterns—can be defined as choreographed sequences of techniques aimed at defeating multiple attackers originating from various directions. They can also be thought of as “quality shapes of strength” representing the comprehensive catalog of Traditional and Kukki Tae Kwon Do skills. Moreover, poomsae demonstratively symbolize the essence of the art and can be distilled down into two discrete categories—those created in modern times as opposed to those tracing their pedigree to primordial practices.

In an effort to quantify the significance of this division, we must first appreciate that the formal exercises found in Tae Kwon Do today were not created in a vacuum. Rather, an analysis of the historical evidence at hand reveals that empty-hand fighting arts, in conjunction with their associated formal exercises, developed naturally across continents as various cultures adapted to cope with the dangers posed by increased trade and human aggression accompanied by imperialist desire. Still, the need to practice prearranged chains of combat tactics in a relatively relaxed environment devoid of mayhem and death was apparently universal.

In his book, Moving Zen, Shotokan karate-do practitioner C.W. Nicol describes forms practice as “a dynamic dance; a battle without bloodshed or vanquished.” He further goes on to say that, “we are somehow touching the warrior ancestry of all humanity” and that “of all the training in karate, none is more vigorous, demanding or exhilarating than the sincere performance of kata.”

From this we can see that poomsae training, if approached in a traditional manner, not only cultivates defensive and offensive proficiency coupled with ki (internal energy) development, but establishes a profound link with masters of the past who clearly did not perform formal exercises merely for physical fitness as some would claim, but as a means of collating hard-earned martial skills often fostered on the field of battle or in the supercharged atmosphere of some distant training hall, for the benefits of students across the centuries.

In order to fully understand the complete history, philosophy and martial applications of Tae Kwon Do poomsae, hyung or tul, one must openly and without bias, take into account the role Okinawan/Japanese kata and Chinese taolu played in their creation. In 1901, on the Ryukyu archipelago, Yasutsune “Anko” Itosu (1830-1915) introduced karate into the mainstream curriculum of the Shuri Jinjo Elementary School and, later, throughout the Okinawan educational system as a whole with the long range goal of cultivating physical fitness and character enrichment in adolescents. This worthy objective was partially accomplished by practicing sanitized versions of the Pinan (Peaceful Mind) kata created by Itosu.

Since, at least for school children, self-defense was not the prime focus of training the practical applications of techniques within the forms were intentionally masked in ambiguity or eliminated altogether. This method of instruction represented a major shift in formal exercise training that would have ramifications far into the future. Criticized for diluting the fundamental purpose of kata, and thus karate in general since forms represented the core of the art, Itosu later wrote, “You must decide whether your kata is for cultivation of health or for its practical use.” He further advised adult students to, “Always practice kata with its practical use in mind.”

Yet, a further endorsement that kata represented a central pillar of karate-do doctrine, awaited the appearance of Gichen Funakoshi (1868-1957) who in his youth, traveled the back roads between Naha and Shuri by lantern light to study with both Itosu and one of his colleagues, Yasutsune Azato (1828-1906), sub rosa. Funakoshi’s required repetition of a single kata under the vigilant eye of Azato day in and day out, often for months on end, to the point of humiliation, clearly instilled an appreciation for the formal exercises that he would carry across a lifetime.

Funakoshi did not bring his karate to Japan until 1922 while in his early fifties. Yet through a concerted effort by him and his third son, Gigo (1906-1945), who immigrated to Tokyo in 1923 at the age of seventeen, significant changes were made to the traditional methods of teaching Okinawan karate. By way of example, in an attempt to simplify the pronunciation of the Pinan kata, Funakoshi rechristened the nomenclature to Heian while altering certain prescribed stances and kicks. Likewise, Gigo is credited with the creation of ritual one-step sparring and the three Taikyoku, or Kihon kata that virtually mirror the Kicho patterns used today in traditional Tae Kwon Do. The Taikyoku set was generally used as a precursor to the more complex Heian kata.

Recognizing the vital roles that Itosu, Azato and Funakoshi played in the proliferation of formal exercises brings us ever closer to the nexus of the correlation between Okinawan/Japanese kata and contemporary Tae Kwon Do poomsae, hyung or tul.  Indisputably, Korean formal exercises were heavily influenced by events that occurred in neighboring countries shortly before, or concurrent with, the Japanese Occupation of the nation during the years of 1910 to 1945. Clearly, the practice of karate required a deep understanding and respect for kata, which continues to stand as a centerpiece of its practice to this day. This principle must surely have been inculcated in the minds of Chung Do Kwan founder Won Kook Lee (1907-2003), Byung In Yoon (1920-1983) of the Chang Moo Kwan, Hwang Kee (1914-2002) father of the Moo Duk Kwan and Choi Hong Hi (1918-2002) creator of the Oh Do Kwan, while studying in Japan under the direction of either Shudokan karate founder Kanken Toyama (1988-1966) or Funakoshi. All of these innovators, soon destined to promote enduring martial traditions within the borders of their native land, returned home from abroad undoubtedly with practical knowledge of the Taikyoku, Pinan, Bassai, Jitte, Empi and Tekki kata—all considered traditional formal exercises—that would ultimately evolve into the Kicho, Pyung-Ahn, Balsek, Sip Soo, Yunbee and Chul-Ki hyung respectively of Tae Kwon Do.

(The above is Part 1 of a two part series by Master Doug Cook, a 6th dan who with Grand Master Richard Chun have just completed a new book, Taekwondo Black Belt Poomsae, Original Koryo and Koryo, published by YMAA and targeted for publication in July 2013.)