Ancient Chinese Weapons and Martial Artists | YMAA
Skip to main content
FREE Shipping Order Over $70. (US Only, Conditions apply)    |   Up to 20% Off. Exclusions apply. 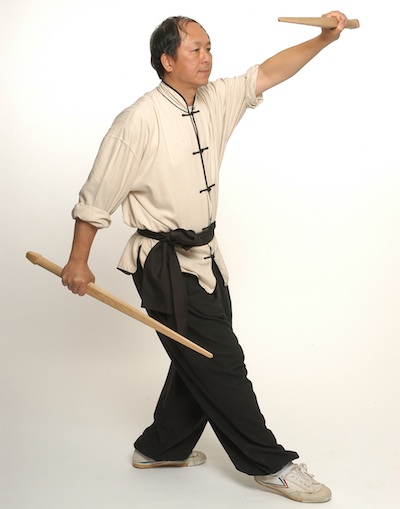 Chinese martial arts have evolved in China for over 5,000 years. This evolution has been experienced not only by the many schools of barehanded fighting, but also by a wide variety of weapons practitioners. As various types of weaponry have evolved, so have the materials and techniques for their fabrication.

From the most primitive weapons made of stone, you can trace their development through copper, brass, iron and finally very strong yet light alloys.

Although the art of Chinese weapons mastery has enjoyed a glorious past, its future remains doubtful. Modern culture leads people away from the study of ancient weapons for a variety of reasons. First, guns, with their ease of operation and greater killing potential, have made people believe that understanding martial weapons is impractical. Second, very few qualified masters are around to teach, and thereby preserve, the artistry of handling ancient weapons. Finally, becoming proficient in any martial art (especially those involving weaponry) requires much time, patience and practice. In today’s society, few people appear willing to exert the energy necessary for learning the ancient art of Chinese weapons.

The study and practice of Chinese weapons, like that of any martial art, has value far beyond that derived from perfecting the techniques. There is an intrinsic historical value. This art form has been developing for over 5,000 years; it represents an incredible evolution of human culture. There is also the more conventional artistic value. Like a fine dancer, the martial artist exhibits total control of his or her body. There is value for one’s health.

Perfecting the art of Chinese weapons requires extensive physical training, which enables the entire body to become strong and well conditioned. Of course, there is the personal self-defense value. Martial weapons originated for defensive purposes. Practicing with them trains your perception and reaction time, allowing for quick and correct maneuvering. Moral value remains the most important aspect of the art of martial weapons. The practitioner must learn patience, perseverance and humility. With diligence and dedication, you will strengthen your spiritual confidence and power.

In ancient China, weapons varied greatly. These variations arose from differences in: 1) the terrain from one province to another; 2) physical traits of martial artists; 3) local culture and lifestyles; and 4) the special purposes of each weapon. To be a knowledgeable martial artist, one must understand these differences in addition to knowing the Chinese weapons themselves.

At one time, the Chinese word for “weapons” was Bingqi, which translates into “soldier instruments.” Later, it was shortened to just Bing. Thus, Chang Bing means “long weapons” and Duan Bing means “short weapons.” Another term commonly used by Chinese is Wuqi, which literally translates as “martial instruments” or “martial weapons.”

During the 5,000-year history of Bingqi, styles, shapes, materials and fabrication techniques have changed from one dynasty to the next. Within the period of one dynasty, some of which have lasted 800 years, countless numbers of Chinese weapons evolved. To characterize this multitude of arms, eighteen kinds of weapons including long, short, very short, soft and projectile were chosen. A martial artist proficient with all of these types was said to have mastered the Shi Ba Ban Wuyi or “eighteen kinds of martial techniques.”

Problems arise in trying to present a relatively simple classification of Chinese weapons. First, the same weapon can have a different name in different dynasties, e.g., Shu (twelve-chi tapered rod) in the Han Dynasty (206-220 B.C.,) is identical to Zhang Er in the Qing Dynasty (A.D. 1644-1911). Second, a weapon with a very minor design change often received a new name. The flat-headed halberd of the Shang Dynasty (1751-1111 B.C.) was called Ge, but the sharp-headed, yet otherwise identical halberd of Spring and Autumn Period and Warring States Period (722-222 B.C.,) was called the Ji.

Finally, many weapons are known from history but their exact structures remain mysteries. For example, the Fa of the Han Dynasty (201 B.C.-A.D. 220) was considered one of the eighteen weapons; but Fa probably meant “battle strategy” rather than an actual weapon. Jue was some kind of spear-like piercing weapon, but it does not exist today. Huan translates as “ring,” but it belongs in the class of long weapons. Ben, which derived from the tool “adze,” was used by carpenters, but the details of its structure remain unclear.

Fighting strategy, a decisive factor in both large battles and personal efforts, has maintained an inseparable relationship with weapons. Some of these weapons were invented for a new battle strategy. For example, the hooked sword, together with the shield, was designed specifically for attacking horses’ legs during a large battle in the Southern Song Dynasty (A.D. 1127-1280). The multi-sectional staff was created specifically for use against an enemy carrying a shield.

There were many strategies and weapons for large battles that occurred in wide, open areas and included mounted cavalry and chariots. Then there were also personal battles, which occurred within large battles surrounded by other warriors or on the streets of a city or even in a small room. Each tactic required different weapons.

In ancient times, large stones heaved by catapults were often the first weapons used in great battles. These very long-range projectiles could kill unprotected enemies before initial man-to-man contact. The primary application of extra long-range weapons, however, was to slow down the fast-advancing cavalry.

After the invention of gunpowder, rocket arrows replaced catapulted stones as the first weapon of warfare. Not only were these arrows capable of being fired further, but they could also be rigged to explode on contact, scaring the horses and tumbling the riders to the ground. By the seventeenth and eighteenth centuries, iron balls fired from cannons had replaced rocket arrows.

As the enemy forces drew nearer, very long-range projectiles lost effectiveness. At an intermediate distance, archers with bows and arrows could impede the enemy. As enemy forces drew even nearer, martial artists used throwing spears either from the ground, horseback, or chariots.

The battle turned into personal conflict as man fought against man. But some men might have been on horseback or in a chariot, whereas others were on foot. A very long contact weapon, such as a nine, twelve or eighteen-foot, tapered spear was effective in all three cases. A soldier on foot would often have another weapon at his disposal. To force his enemy off a horse or out of a chariot, he would often attack the horse’s legs with a hooked spear while holding a greased rattan shield for protection. Once both soldiers were on the ground, close personal fighting began. Long-range weapons became less effective, so techniques and weapons shifted to the short-range type.

Short range fighting in a large battle was quite different from one-on-one conflicts in a small area. Others often surrounded the soldiers and there was no way to escape. Therefore, endurance became a key factor in determining the victor. Shorter and lighter weapons such as the sword, saber, or three sectioned staff were utilized. With hidden weapons like whips, chains, or darts, a martial artist was well prepared for a short-range battle.

Some soldiers—only the very strongest—would use a long weapon even in close fighting. They had the advantage of being able to injure their enemy without exposing themselves to attack. The long staff, spear or large saber was very difficult to block because of its weight.

The Sword is Choice of Martial Artists

The martial artist using a shorter and lighter weapon emphasized speed and maneuverability when approaching the enemy. Once at close range, the long weapon, which was so powerful, became a hindrance to its wielder.

History abounds with tales of terrible slaughter during the ceaseless wars that racked ancient China. These wars were fought with a vast array of martial weapons that played a major role in the development of China. From the days of stone weapons before Shen Nong (2700 B.C.) to the Qing Dynasty (circa A.D. 1900), when guns became popular, you can trace the evolution of China through the evolution of its weaponry.

The ancient Chinese were leaders in the metallurgical sciences. For over 3,000 years, the Chinese channeled weapons research into discovering new alloys and techniques for forging new metals, which were stronger and could hold an edge better. In those days the discovery of a new alloy for sword making had as much effect on society as the discovery of atomic power in modern times.

Unfortunately, very little information exists on the entire gamut of arms. Much has been discovered about certain weapons—the narrow blade sword, for example—whereas little is known of other weapons of which only a few have been found. More documents have been found on the sword because the ancient Chinese considered it a more important weapon. Considered to be the highest art of Gongfu (Kung Fu), the narrow blade sword was favored by emperors, poets, and scholars alike. Confucius carried one for the noble feeling it gave him. Li, Tai Bai, a famous poet in the Tang Dynasty (A.D. 618-907) called himself “fond of drink and master of the sword.”

The pure physical beauty of the sword contributed to the great appreciation it won. Mastering the complicated technique of sword fighting was so difficult that experts were held in the highest regard.

Physical beauty alone would not have been enough to account for the existence of so much more information about the sword than other weapons. The key to the preservation of the history of the sword lies in the fact that emperors and martial artists favored it. They popularized the sword to such an extent that not only did men carry them, but women, also, became attracted to them.

(This is an excerpt from Ancient Chinese Weapons: A Martial Artist’s Guide by Dr. Yang, Jwing-Ming.)