Kravist Weapon Defense Drills | YMAA
Skip to main content
FREE Shipping Order Over $70. (US Only, Conditions apply)    |   Up to 40% Off. Exclusions apply. 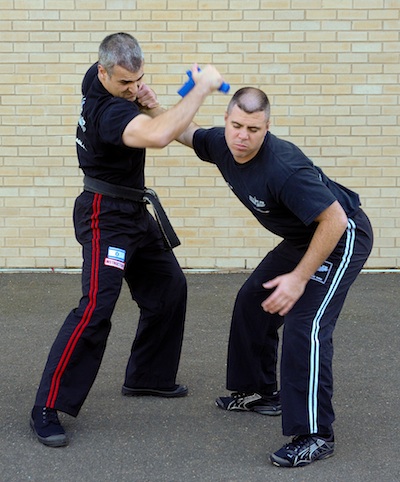 Working with a good partner to practice and perfect weapon defense techniques is instrumental to your development as a kravist. The force and speed of the mock attacks should be gradually built up over time as your defensive skill sets improve.

Working with a good partner to practice and perfect weapon defense techniques is instrumental to your development as a kravist. The force and speed of the mock attacks should be gradually built up over time as your defensive skill sets improve. We do not advocate training with real weapons. Facsimile training weapons are readily available. We highly recommend Blueguns facsimile weapons for your training needs. Rubber or plastic knives and padded batons can also be acquired through Asian World of Martial Arts. Eye protection, especially when training against edged-weapons attacks is prudent and always a must when practicing disarms with projectile-firing facsimile firearms.

Training Drills with a Partner

As you work with a partner, you will develop trust enhancing your ability to work with one another and enabling you to “go harder” as you progress within your respective skill sets. Training with multiple partners is also beneficial for the obvious reason that no two people move exactly alike. Someone with longer limbs will execute attacks and defenses differently than someone with shorter limbs. Bodyweight and strength are also highly influential training factors. Men and women should train with one another interchangeably. Coordinate your training with your partner or group of partners to ensure maximum training benefit. Designate who will perform the specific technique against the corresponding mock attack. After sufficient practice and familiarity with a given technique, series of techniques, and the overall training concept, introduce variations.

Training scenarios and variations with a partner should be worked in two practice phases: (1) limited—where you predetermine how your partner will attack and vary the designated attacks; (2) unlimited—you know a variation will come, but do not necessarily know how or when. Limited training technique, for example, might include practicing defenses against pre-set overhead stab attacks. You know your partner is going to attack with an edged weapon slamming it overhead and down into your neck area. Following this limited training method, your partner at the direction of an instructor or his own initiative, will inform you that he will throw a right hook stab to your head. The point is that you know what is coming.

Unlimited open training allows your training to encompass the entire scope of weapon attack variations. Unlimited open training is used at the most advanced levels to resemble the street’s unexpected dangers. Therefore, your partner could have any weapon in his hand or no weapon at all. Using the above example of an overhead-stab limited training exercise, the exercise can change to unlimited open training edged-weapon attacks as follows: you do not know which arm will launch the attack (right or left), what type of attack (straight, underhand, hook stab, or slash to the femoral artery, or variations of these), or the attack angle (straight or from an “off-angle”) and height (high or low). The point is that you do not know what is coming.

You should train to defend against attacks coming from all angles and heights. You should attempt to incorporate specific techniques you have learned to defend an unanticipated attack. The technique may not always be performed correctly, but you will condition yourself to be proactive. Your ability to perform the optimum technique will improve over time as the techniques and reactions become more instinctive and ingrained. Defending against feints is also crucial to realistic training. You should combine all aspects of krav maga through retzev counterattacks to create explosive series of counterattacks using all parts of the body and weapons of opportunity. (Retzev is a Hebrew word that means “continuous motion” in combat.)

The following is a non-exclusive set of training drills to defend against armed attacks. Practice against both left- and right-handed attacks or threats with each type of weapon. You may also have your training partner incorporate strikes with his free arm or legs prior to and during the weapon’s engagement.

Work with a partner and a foam or rubber-type impact weapon to defend against the following non-exclusive list of mock attacks from all angles, including your training partner using both right- and left-handed grips:

Work with a partner and rubber edged weapon to defend against the following non-exclusive list of mock attacks from all angles, including your training partner using both right- and left-handed grips.

Handgun defenses should be practiced against both one- and two-handed grips.

The assailant walks around the defender and attacks or threatens from all angles and directions as delineated in the previous drills:

Trainees form two lines and a student walks between the two and defends against weapon threats and attacks. This is a good drill for unarmed scenario training as well.

Trainees work together in groups of four. One person is the designated defender. The other three students are called by number by the instructor or another trainee. Each trainee is armed with facsimile weapons, which could include an impact weapon, edged weapon, and firearm. The defender stands still while the three other students line up to the defender’s left, center, right with the weapons in full view. One student is called or is otherwise designated to attack with a facsimile weapon. The goal is to practice immediate recognition of and reaction to many different threats and attack patterns from all angles and directions.

(The above excerpt is from Krav Maga Weapon Defenses by David Kahn.)