Principles Common to Both Qin Na and Ground Fighting | YMAA
Skip to main content
FREE Shipping Order Over $70. (US Only, Conditions apply)    |   Up to 40% Off. Exclusions apply. 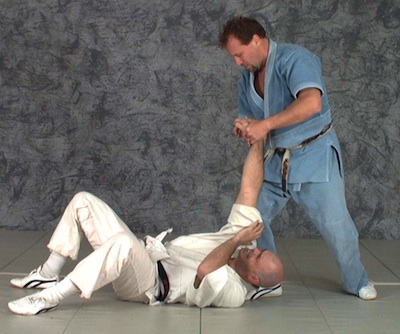 Principles Common to Both Qin Na and Ground Fighting

A lever is the simplest of machines, which utilizes a rigid bar to rotate around a fixed pivot point called a fulcrum in order to exert force on an object (load). If the resistance or load exceeds the strength of the bar, the bar will break. Biomechanically speaking, the arm is a bar, and when the fulcrum is at or above the joint, breakage can easily occur.

A lever is the simplest of machines, which utilizes a rigid bar to rotate around a fixed pivot point called a fulcrum in order to exert force on an object (load). If the resistance or load exceeds the strength of the bar, the bar will break. Biomechanically speaking, the arm is a bar, and when the fulcrum is at or above the joint, breakage can easily occur. There are 206 bones in the adult human body some of which, mostly those of the extremities (126 bones), are susceptible to the effects of external leverage for Qin Na (Chin Na) and ground fighting purposes.

During the normal operational state of the body, the muscles provide the force that makes the levers operate to produce motion (movement chains) within the functional range of the joint. In the context of applying joint locks, we use the principle of leverage to effect control over our opponent. Qin Na techniques tend to use leverage often as a means of pain compliance. This may mean bending a finger or two to such a degree as to give the pain-receiving brain an offer it cannot logically refuse. It is important to remember that joints can be more readily damaged through torsion than hyperflexion (or hypercontraction).

Combining the two stressors is best particularly if there is tension in the movement chain as well. The opponent must submit and comply with the person applying the painful technique or suffer continuing and even increasing pain and possibly even risk breakage of the seized appendage or related joint. Ground fighters also use the principle of pain compliance, adding the use of leverage as a means to restrict the ability of a person to move (‘pinning’ him), often using body weight as the driving force.

Qin Na practitioners may use the ground as a place of positioning, but normally they themselves do not go to the ground ahead of their opponent. Rather, they are more reliant on applying the direction of a technique against such a fixed object (such as the ground) in order to create an overwhelming pressure to make the technique work and to restrict a person’s mobility by pressing him into such a fixed object.

How do these principles of physics work for us in fighting situations? Firstly, we apply pressure on our opponent’s finger, hand, arm, leg, and so on or whatever part of his body we can use as a bar. We use our own body to provide a fulcrum (pivot point) against the anatomically weak link between two bones, that being the joint). We use a load that either exceeds the strength of these bars causing the bone to break or, more commonly, produces painful stretching and tearing of the muscles, tendons and ligaments associated with that joint under pressure. 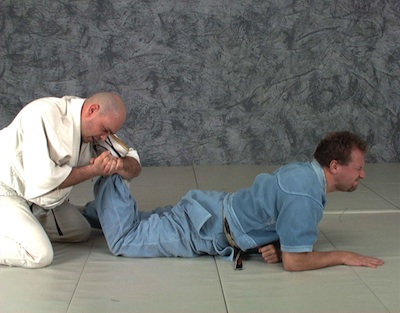 The body has over 650 muscles, which are relatively elastic and are only capable of forcefully contracting (pulling), the coordinated result of which is movement of the body. A tendon attaches a muscle to a bone. Tendons are made up of strong somewhat elastic tissue. Over-stretching these results is a strain. A ligament attaches a bone to another bone. Ligaments are non-elastic and a sprain results when they are stretched. If the amount of attacking force generated causes the range of mobility of the joint capsule to be exceeded, the structural integrity of the joint is compromised.

Secondly, we apply pressure to the body bar as to bend the appendage in the opposite direction(s) to which it is accustomed. This can be accomplished by bending an appendage ‘backward’ ‘sideward’ in a twisting fashion or even ‘forward’ (flexion) beyond its’ normal range of motion.

Having an understanding of the anatomy of the human body is helpful when thinking of techniques needed to break it down. Indeed the study of biomechanics can lead to more smooth direct and transitional applications of techniques. Experts in both Qin Na and ground fighting can feel only a part of a person’s body to know the structural orientation of that body. Blind judoka are the ultimate proof of this. The study of push hands offers excellent training for stand up grappling, throwing, and even ground fighting, though the traditional ‘root’ through the feet has been lost with the latter fighting style. Certainly sensitivity is gained naturally from seizing thousands of appendages and from countless hours grappling on the mat, but training drills can be created to sense the beginning of the application of specific techniques. From this your counterattacks can flow.

Speed of Application in Qin Na

Speed of application is more a concern and a necessity in Qin Na than in ground fighting, although one can strive to seize opportunities to attack (or defend) as quickly as possible as they arise, being mindful of course of the possibilities of set ups (traps). To the Qin Na person, speed is of the essence when initially grabbing your opponent’s appendages because your opponent is free to move about and is capable of punching, kicking, and throwing you down or otherwise taking you out with blinding speed. In encounters with such skillful fighters, attempts at using Qin Na are not recommended.

Never underestimate your opponent. Apply your Qin Na with as much speed and conviction as possible. Follow-up techniques on the other hand, may be done in a slow and calculated manner if desired, once seizing contact has been made and pain compliance has been established. When you do ground fighting with a skilled opponent, you are generally locked up with him, and are fighting to establish a defensible position. It can be likened to a game of chess, where you may have to think a few moves ahead in order to get to where you want to be in order to effect your intended technique.

Need for a Partner in Qin Na

There is an absolute necessity for both Qin Na and ground fighting practitioners to have partners to train with because, unlike punching and kicking, there are no training aids like the heavy bag, to practice your technique on. Your partner can assist you with the refinement of your own technique if he provides meaningful feedback to you (hopefully not by screaming in pain).

The principles common to both Qin Na and ground fighting are many. Clearly the use of joint locks to effect submission in both are evident but how they are applied can be radically different. Ground fighters may use neck, arm and leg locks whereas the stand up Qin Na fighters do not generally use leg locks (except in cases where a kicking leg is grabbed) because of their relative body positions. Qin Na fighters prefer smaller appendages using mostly their arms to control their opponent, whereas the ground fighter is free to take on larger limbs, using their entire body weight, strength, and their legs to defeat their opponent.

(The above excerpt is from Chin Na In Ground Fighting, Principles, Theory and Submission Holds for all Martial Styles by Al Arsenault and Joe Faulise.)

It was 1971 when Mr. Arsenault began his martial arts training in North Bay, Ontario under the watchful eye of Sensei Duane Sawyer in Kenshokan Dharma, Goshin Jutsu. At this time, he had yet to hear of Bruce Lee who became a screen idol in the early 70s and started the Kung Fu craze here in North America. He knew about the existence of judo, as it was an Olympic sport. Karate was just a word that he associated to a newly introduced fighting style and kung fu was relatively unheard of. Mr. … More »