Meditation Techniques at YMAA Retreat Center - Part 2 | YMAA
Skip to main content
FREE Shipping Order Over $70. (US Only, Conditions apply)    |   Up to 40% Off. Exclusions apply.

Two hard, consecutive chimes signal the start of the second segment. In this segment, we use a breathing technique called embryonic breathing. Embryonic breathing gets its name because it is based on the actions of pre-birth breathing. An embryo absorbs nutrients from its mother with a pumping action of the abdomen, connected via the umbilical cord. We mimic this method with reverse abdominal breathing, alongside movement with the perineum and lower back.

(Segment 1: Calming the Mind may be found in the article, Meditation at YMAA Retreat Center Part 1 by Javier Rodriguez with Michael Heveran, Dec. 9, 2013)

Two hard, consecutive chimes signal the start of the second segment. In this segment, we use a breathing technique called embryonic breathing. Embryonic breathing gets its name because it is based on the actions of pre-birth breathing. An embryo absorbs nutrients from its mother with a pumping action of the abdomen, connected via the umbilical cord. We mimic this method with reverse abdominal breathing, alongside movement with the perineum and lower back.

Since you have already returned the son to the mother, your attention should be focused entirely on the lower dan tian. We will continue to use reverse abdominal breathing, so the abdomen and perineum must respectively move inward and up on the inhale, then outward and down on the exhale. Your inhale and exhale should remain the same length.

For this section, we'll add a one more piece to our breathing strategy: the lower back. As your abdomen moves inward, let the lower back move inward as well, and vice versa. If done correctly, this creates inward pressure on the abdomen from four sides. The abdomen and lower back provide inward pressure from the front and back. At the same time, as the lungs expand, they push the diaphragm down, while the perineum pushes upward from below. These movements all come together to help you develop a deep, personal feeling of your lower dan tian. The more attuned that you can be to this center, the more control you can exercise over your energy, and the more harmoniously your body will function.

If you intend to continue into more complex internal cultivation techniques, it is imperative that you know and feel your energy center. Embryonic breathing allows you to build these skills by training you to focus your attention as you delve deeply into a semi-sleeping state. Over time, as you become accustomed to finding your center, you will develop greater control over your energy.

Continue the process of reverse abdominal breathing, in conjunction with the lower back, focusing on the lower dan tian, until the chime signals the end of the second segment. 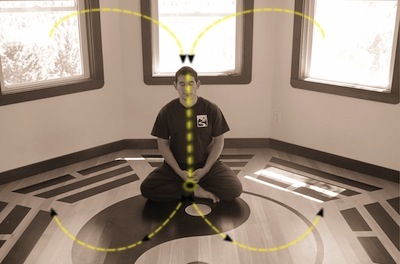 Three consecutive hard chimes initiate the third segment. In this segment, our goal is to exchange energy with nature, and we do so with a form of qigong called Sancai Qigong (sān cái qì gōng 三才氣功). The name Sancai refers to the traditional Chinese concept of the Three Natural Powers: Heaven energy, Earth energy, and human energy. We need to understand the basic laws that govern these powers and build a deep level of sensitivity to the connections between them and ourselves. Building this sensitivity can help us coexist with nature and live a long, healthy life.

Because the mind is involved, you should still be using reverse abdominal breathing. But for this segment, we will also add a few new details to our breathing strategy.

When you inhale, use your mind to reach out as far as you can. Imagine gathering up as much energy as possible and leading it down through the baihui (bǎi huì 百會) cavity, located at the top of your head. Draw in your abdomen and raise your perineum up. While still inhaling, lead it down your centerline and into the lower dan tian.

On the exhale, lead the energy out of the huiyin (huì yīn 會陰) cavity, located at the perineum. Again, with your mind, reach out as far as you can imagine, distributing the energy outward at all angles. Allow the abdomen to expand. Earlier, we saw that reverse abdominal breathing involved alternating between contracting and relaxing the anus muscles in order to raise and lower the perineum. Here, we'll once again involve the perineum by adding a slight outward push with the anus muscles instead of simply relaxing them.

Two consecutive hard chimes indicate the beginning of the final segment. In this segment, our goal is to manipulate energy for martial purposes. Grand circulation is a technique which is meant to build the foundation for manifesting martial power, better known in Chinese martial arts as jing (jìng 勁). Practitioners of different martial arts will use varying types of jing – hard, soft, and anywhere in between – but the process for leading the energy is the same. To begin grand circulation, you will need to maintain focus without being distracted. Where the mind goes, the energy will follow, so the smallest thought can send energy off course.

For this next section, you'll need to use a simple spine wave technique. Beginning with the base of your spine, move each section of your spine forward, rippling one vertebra at a time from bottom to top, like a slow-moving whip. This motion is important for generating force in soft martial arts like Taijiquan and White Crane. 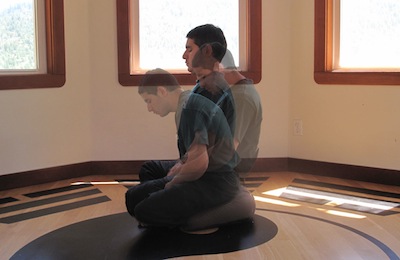 The spine wave is a useful way to open the mingmen (lit. "life door" mìng mén 命門), a cavity located between the L1 and L2 vertebrae at the inner curve of the lower spine. We draw energy from the dan tian through this gate by waving the spine. When this inner curve at the lower back opens, the mingmen opens and allows energy out. As the spine continues its wave, we lead the energy up the back to the next gate.

The next gate brings us to another important cavity to know is the dazhui (dà zhuī 大椎). The dazhui is located at the center of the upper back, between the shoulder blades. If you hold out your arms to either side, they form a straight line. At the middle of this line is the dazhui. Both the dazhui and the mingmen are gates through which energy passes during grand circulation.

As your spine wave continues upward, your upper torso should be drawn forward. Exhale while using the mind to lead the energy from the dazhui, around the shoulders, then down the arms. Again, it helps to slightly move the shoulders forward. You might feel a tingling sensation when leading the energy down the arms; this is normal. Finally, the energy will stop at the palms. On the next inhale, reset your torso to begin another spine wave.

If you have gotten this far, then you have successfully lead the energy from the lower dan tian to the limbs, directing it to the lao gong (láo gong 劳宫) cavities in the palms. Here, you have a few options to manipulate the energy, but as a beginner, you can just place your palms on your abdomen. This will form a direct connection that leads the energy back to the lower dan tian, forming a complete circuit.

When the final chime closes our meditation session, we slowly open our eyes and let our minds awaken from their semi-sleeping states. Still sitting, we embark on a series of recovery exercises, circulating the blood once more to prepare for another long day of training on the mountain.