Healing with Qigong and Tai Chi | YMAA
Skip to main content
FREE Shipping Order Over $70. (US Only, Conditions apply)    |   Up to 20% Off. Exclusions apply. 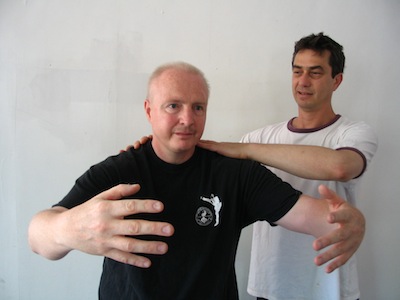 Healing with Qigong and Tai Chi

Ramel Rones was accepted by Dr. Yang as a disciple in 1983 due to his exceptional learning capability and humble dedication to the training. After years of gold award-winning martial arts demonstrations and competitions across the United States and China, Ramel now works as a Scientific Consultant of Mind/Body Therapies at the Dana Farber Cancer Institute and at Harvard and Tufts Medical Schools in Boston, Mass.

Ramel Rones was accepted by Dr. Yang as a disciple in 1983 due to his exceptional learning capability and humble dedication to the training. After years of gold award-winning martial arts demonstrations and competitions across the United States and China, Ramel now works as a Scientific Consultant of Mind/Body Therapies at the Dana Farber Cancer Institute and at Harvard and Tufts Medical Schools in Boston, Mass. He has been a pioneer in helping bridge the gap between East and West through the National Institute of Health studies to understand how and why qigong and tai chi can promote healing.

The Chinese internal arts have slowly been accepted in the West as complimentary treatment as evidence mounts of their efficacy at preventing and healing illness. New data is discovered regularly by researchers all over the world which demonstrates the importance of understanding the mind/body connection. While Western science works to understand the body from a physical perspective, such as identifying the specific hormones released by the nervous system during times of stress which suppress the immune system, the Eastern arts specialize in training the mind, turning the attention inward, and learning to relax deeply. The stress relief and gentle exercise of the internal arts have been recognized for centuries for their health benefits. It is time now to study this ancient healing methodology with modern scientific means and to bring this information to mainstream America and the rest of the world.

Utilizing the principles of qigong, Ramel has helped many patients to survive cancer by stimulating their immune system to a level at which they may endure the rigors of chemotherapy and radiation. His work has also helped to improve the quality of life of those suffering with arthritis, osteoporosis, sarcopenia, fibromyalgia, and other common ailments.

Cancer survivor Bob Ellal came to study with Ramel Rones and YMAA while suffering a cancer relapse and learned to use qigong exercises to increase his body's natural defense mechanisms, and to develop his fighting spirit, which is essential in a healing crisis. Mr. Ellal was told by his doctors that little else could be done, and that he was unlikely to survive another round of treatment.

He was, in his words, "sent home to die". He attributes his survival to his practice of the internal arts, which he learned from Ramel Rones and YMAA.


"I'm Bob Ellal. I was born and raised in Eastern Connecticut, and led a pretty typical middle-class American life. I played football for my high school team and went to the University of Connecticut. I got married, found a job working in the corporate world, had children, and built a new house on several acres of riverside land. Then cancer struck. I was thirty-two.
"In 1991, I was diagnosed with stage four lymphoma cancer of the bone and given six months to live. Instead of accepting this death sentence, I used meditation and visualization to help my medical treatments and defeat the first onslaught. When the cancer returned, I went deeper into my study of meditation and discovered the Chinese art of qigong, or energy work. I connected with Ramel Rones, a disciple of Dr. Yang, Jwing-Ming, who was giving a seminar nearby.
"After consulting with Dr. Yang, Rones taught me several important qigong forms, along with healing strategies, to help mobilize my immune system and support the medical treatments I was undergoing. Although I dealt with three relapses and endured two bone marrow transplants, I practiced for hours a day throughout the ordeal. My efforts paid off—I have been clear of cancer for eight years! Despite the damaging effects of high-dose chemotherapy that accompanied the bone marrow transplants, my immune system is better than normal—I can't catch a cold! I owe my life to the qigong knowledge brought to the West by Dr. Yang.

"During my second bone marrow transplant, I made a vow while I was in the isolation room enduring the chemotherapy. Even though the odds were against my survival, I vowed that one day I would see my sons, aged seven and five at the time, play football for the same high school team that I captained. Last year, it happened, when they both suited-up for Griswold High. Thanks to thousands of hours of qigong practice, I was able to keep my word and see my sons grow up.
Thank you Rami, and thank you Dr. Yang."