The Victim Interview | YMAA
Skip to main content
FREE Shipping Order Over $70. (US Only, Conditions apply)    |   Up to 40% Off. Exclusions apply. 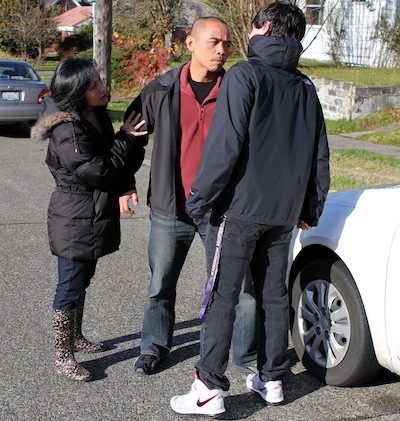 I was parked alongside a major street in downtown Seattle. My hands were full of boxes and the mid-afternoon sun was glaring in my face, making it hard to see despite my polarized glasses, so it took a couple tries to get my key into the lock. I awkwardly dragged the door open, nearly dropping some of my packages, and began shoving my purchases in to the car.

I was parked alongside a major street in downtown Seattle. My hands were full of boxes and the mid-afternoon sun was glaring in my face, making it hard to see despite my polarized glasses, so it took a couple tries to get my key into the lock. I awkwardly dragged the door open, nearly dropping some of my packages, and began shoving my purchases in to the car.

If he hadn't spoken, I wouldn't have known he was there. "Hey buddy, you know what time it is?"

While his question seemed innocuous, the fact that he was standing a foot away from me when he asked set alarm bells ringing in my head. I hurriedly threw the last box into the vehicle, more to get it out of my hands than for anything else, shifted slightly away from the car, and spun to face him. Simultaneously, I relaxed my posture, straightened my spine, and held my hands out low between me and him.

He didn't look overly threatening despite his proximity, and his hands were empty, but he was wearing a timepiece on his right wrist. "Sorry man, I don't have a watch," I replied.

The smirk on his face disappeared as he took in my posture. Muttering something I couldn't understand over the traffic noise, he buggered off clearly looking for a less prepared victim. As he walked away, I spotted a suspicious bulge, either pistol or large knife stuffed into his waistband beneath his untucked shirt.

Criminals like to dish out pain, but they aren't so keen to be on the receiving end of it. Becoming injured in a confrontation not only diminishes their ability to make a living by preying on others, but also sets them squarely in the sights of other predators higher up the food chain. Consequently, before a bad guy tees off on you, he will evaluate his odds of success. This evaluation is often called an "interview." Unlike a job search, this is one interview that you don't want to pass.

If you are not paying attention to your environment and appear to be an easy target, you are likely to be selected as the bad guy's next victim. This interview may be conducted by a single individual or a group of thugs. It may take place quickly or you may be stalked over a period of time. Regardless, your goal in such situations is to be both calm and resolute. Don't start anything you don't have to, but be prepared to fight if necessary. While most people look at someone's size and physique, experienced predators know how to recognize a threat from a person's posture or movement.

If you are approached by a single individual, be wary of bystanders who may join him. Don't forget to glance behind you when prudent because he may have an accomplice(s). Use sound, smell, reflective surfaces, and shadows to sense what is going on where you cannot look. Furthermore, pay attention to escape routes should you need to fight your way free. Be wary of the other guy's hands, particularly if you cannot see both of them because he may very well be armed and preparing to use his weapon against you.

The less you look and act like a victim during the interview process, the safer you will be. Many self-defense instructors use "woofers" who play the bad guy's role in this process so that you can experiment safely. You learn how to deal with tense situations through scenario training where your teachers debrief your performance afterward. These drills are an excellent way to prepare for interviews on the street.

We think it was Geoff Thompson who originated this concept. The 4 D's is an excellent, easy to remember way of describing dirty tricks that sneak attackers often use to disguise their intent, get close enough to launch their assault, and keep you from responding until it is too late to defend yourself. This concept is an extension of the interview process. You are singled out as a potential victim, and then the bad guy(s) uses dialogue, deception, distraction, and destruction to set you up and take you down:

Despite these 4 D's, it is exceedingly rare for the victim to be caught totally unaware. For example, even if they were sucker punched, most assault victims report that they saw the blow coming but did not have time to react. Even when long-range weapons are involved (such as firearms), fights typically begin close up. Unarmed confrontations always take place at close range once things get violent. Your level of awareness and preparedness should ratchet up a bit whenever a stranger is close enough to strike, at least until you have given him a thorough once-over and dismissed any threat.

The above is an excerpt from Scaling Force: Dynamic Decision-Making Under Threat of Violence by Rory Miller and Lawrence A. Kane.