Still Sitting Meditation and Still Standing Meditation—Yin and Yang | YMAA
Skip to main content
FREE Shipping Order Over $70. (US Only, Conditions apply)    |   Up to 40% Off. Exclusions apply. 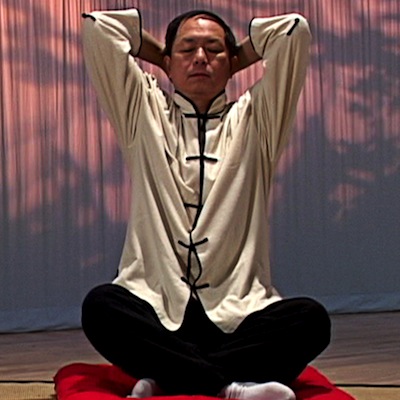 When you practice taiji qigong, you must correctly coordinate your breathing to be smooth and natural. If you would like to know more about taiji qigong or general martial qigong training, both in terms of theory and practice, you should refer to these books: The Essence of Shaolin White Crane and The Essence of Taiji Qigong, published by YMAA.

On the yin side, during still taiji qigong, when you are in a sitting position, your body is in a very calm and relaxed state. However, if you are in a standing position, your legs and parts of your body will be more tensed. This does not matter for your practice goals because your physical body is not moving and your mind will be free from its obligations to direct the body's motion. Instead, you will be able to concentrate and lead the qi to circulate anywhere you desire.

Sitting meditation includes a few key training practices. First, of course, is to regulate the body (tiao shen) until the body is in its most relaxed and natural state. That means the entire physical body is very comfortable and there is no uncomfortable feeling at all to disturb your mind.

Second, you will learn how to breathe correctly, which is considered the key to calming down or directing the qi with coordination of the mind. This is the process of regulating the breathing (tiao xi). In this practice, the first step is learning the normal abdominal breathing (zheng fu hu xi or shun fu hu xi). In this step, you learn how to control the abdominal muscles smoothly and naturally. Next, you learn the reversed abdominal breathing (fan fu hu xi or ni fu hu xi). In this step, you are learning how to coordinate the abdominal movement with the emotional mind or wisdom mind. Reversed abdominal breathing is natural and we have used it whenever we are emotionally disturbed or we have an intention to energize our physical body to a higher level.

Third, after you can store plenty of qi in the lower dan tian, you start to learn how to regulate your mind to a calm, peaceful, and concentrated state. This is the process of regulating the mind (tiao xin). That means to regulate the emotional mind (xin) by your wisdom mind (yi). This is the step of conquering yourself. Generally speaking, this step is the most difficult since you are dealing with your own mind. Your mind is just like a general who directs the battlefield. If this mind is not calm and wise, then the qi (soldiers) will not be led efficiently.

Fourth, after you have mastered the key to regulating your mind, you will learn how to lead the qi to circulate in two most important vessels: the conception vessel (ren mai) and the governing vessel (du mai) to complete the Small Circulation (Xiao Zhou Tian). Moreover, you will also learn the Four Gates Breathing (Si Xin Hu Xi) and use the mind to lead the qi to the centers of palms and soles.

You are also learning the skin breathing or Belt Vessel Breathing (Ti Xi, Dai Mai Hu Xi). These breathing techniques are considered as the foundation of the Grand Circulation (Da Zhou Tian). All of the above practices are included in the step of regulating the qi (tiao qi).

The fifth step or the final goal of still sitting meditation is learning how to use the mind to lead the qi from lower dan tian through thrusting vessel (chong mai) or spinal cord to the brain to energize the brain to a higher enlightened level until the third eye is opened. This is the step of regulating the spirit (tiao shen). It is believed that when the third eye is opened, you can feel and communicate with the natural universal energy more directly. This is the stage of unification of heaven and human (tian ren he yi).

From above very brief summary, you can see that this is a huge subject, which all of the Western and Eastern religions have been aiming for since ancient time. If you are interested in these trainings, you may refer to the future books mentioned earlier.

(The above excerpt is from Tai Chi Chuan Classical Yang Style by Dr. Yang, Jwing-Ming)