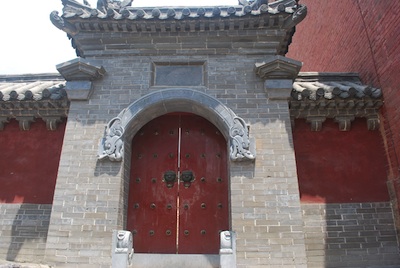 Chinese martial arts probably started long before history was recorded. Martial techniques were discovered or created during the long epoch of continuous conflict between humans and animals or between different tribes of humans themselves. From these battles, experiences were accumulated and techniques discovered that were passed down from generation to generation.

Chinese martial arts probably started long before history was recorded. Martial techniques were discovered or created during the long epoch of continuous conflict between humans and animals or between different tribes of humans themselves. From these battles, experiences were accumulated and techniques discovered that were passed down from generation to generation.

Later, with the invention of weapons—whether sticks, stones, or animal bones—different types and shapes of weapons were invented, until eventually metal was discovered. At the beginning, metal weapons were made from copper, tin, or bronze, and after thousands of years of metallurgical development, the weapons became stronger and sharper. Following the advancement of weapon fabrication, new fighting techniques were created. Different schools and styles originated and tested one another.

Many of these schools or styles created their forms by imitating different types of fighting techniques from animals (e.g., tiger, panther, monkey, bear, or snake), birds (e.g., eagle, crane, or chicken), or insects (e.g., praying mantis). The reason for imitating the fighting techniques of animals came from the belief that animals possessed natural talents and skills for fighting in order to survive in the harsh natural environment.

The best way to learn effective fighting techniques was by studying and imitating these animals. For example, the sharp spirit of the eagle was adopted, the pouncing, fighting of the tiger and the eagle's strong claws were imitated, and the attacking motions of the crane's beak and wings were copied.

Since the martial techniques first developed in very ancient times, they gradually became part of Chinese culture. The philosophy of these fighting arts and culture has in turn been influenced by other elements of Chinese culture. Therefore, the yin and yang taiji theory was merged into techniques, and the bagua eight trigrams concept was blended into fighting strategy and skills.

Chinese culture initially developed along the banks of the Yellow River. After many thousands of years, this culture spread so widely that it eventually reached every corner of Asia. China is called Central Kingdom (Zhong Guo) by its neighboring countries. The reason for this was because China possessed a much longer history in artistic, spiritual, religious, and scholastic fields, as well as many others; Chinese history stretches back more than seven thousand years.

To the neighboring countries, China was an advanced cultural center from which they could learn and absorb cultural forms. Over thousands of years, the Chinese people themselves have immigrated to every corner of Asia, carrying with them their arts and customs. From this prolonged exchange, Chinese culture became the cultural foundation of many other Asian countries. Naturally, Chinese martial arts, which were considered a means of defense and fighting in battle, have also significantly influenced other Asian societies.

However, since the martial arts techniques and the methods of training could decide victory or defeat in battle, almost all Chinese martial arts were considered highly secret between countries, and even between different stylists. In ancient times, it was so important to protect the secret of a style that usually a master would kill a student who had betrayed him. It is no different from a modern government protecting its technology for purposes of national security.

For this reason, the number of Chinese martial techniques that were revealed to outside countries was limited. Often, when an outlander came to China to learn martial arts, he first had to obtain the trust of a master. Normally, this would take more than ten years of testing from the teacher in order to achieve mutual understanding. Moreover, the techniques exported were still limited to the surface level. The deeper essence of the arts, especially the internal cultivation of qi and how to apply it to the martial techniques, normally remained a deep secret.

For example, it is well known in China that in order to compete and survive in a battle against other martial styles, each martial style must contain four basic categories of fighting techniques. They are kicking (ti), hand striking (da), wrestling (shuai), and joint locking or seizing and controlling techniques (qin na or chin na.) When these techniques were exported to Japan, they splintered over time to become many styles. For example, punching and kicking became karate, wrestling became judo, and qin na became jujitsu.

Actually, the essence and secret of Chinese martial arts developed in Buddhist and Daoist monasteries were not completely revealed to Chinese lay society until the Qing dynasty (A.D. 1644-1912). This secret has been revealed to Western countries only in the last three decades.

There was an extreme scarcity of documentation before A.D. 500 with regard to martial arts organization and techniques. The most complete documents that exist today concern the Shaolin Temple. However, since Shaolin martial arts significantly influence the overwhelming majority of Chinese martial arts society today (and this includes taijiquan), we should be able to obtain a fairly accurate concept from studying Shaolin history.

Buddhism traveled to China from India during the Eastern Han Ming emperor period (A.D. 58-76). Chinese emperors were given special names upon their coronation; it was customary to address them by this name, followed by the title "emperor." Several hundred years later, as several emperors became sincere Buddhists, Buddhism became very respected and popular in China. It is estimated that by A.D. 500, there probably existed more than ten thousand Buddhist temples. In order to absorb more Buddhist philosophy during these five hundred years, some monks were sent to India to study Buddhism and bring back Buddhist classics. Naturally, some Indian monks were also invited to China to preach.

According to one of the oldest books Deng Feng County Recording (Deng Feng Xian Zhi), a Buddhist monk named Batuo came to China to preach Buddhism in A.D. 464. Deng Feng is the county in Henan Province where the Shaolin Temple was eventually located.

Thirty-one years later, A.D. 495, the Shaolin Temple was built by the order of Wei Xiao Wen emperor (A.D. 471-500) for Batuo's preaching. Therefore, Batuo can be considered the first chief monk of the Shaolin Temple. However, there is no record regarding how and what Batuo passed down by way of religious qigong practice. There is also no record of how or when Batuo died.

The Journey of Da Mo

However, the most influential person in this area was the Indian monk Da Mo. His last name was Sardili. He was also known as Bodhidarma and was once the prince of a small tribe in southern India. He was of the Mahayana school of Buddhism and was considered by many to have been a bodhisattva, that is, an enlightened being who had renounced nirvana in order to save others. From the fragments of historical records, it is believed that he was born about A.D.483.

Da Mo was invited to China to preach by the Liang Wu emperor. He arrived in Canton, China in A.D. 527 during the third year of the reign of the Wei Xiao Ming emperor Xiao Chang (A.D. 516-528) or the Liang Wu emperor (A.D. 502-557). When the emperor decided he did not like Da Mo's Buddhist theory, the monk withdrew to the Shaolin Temple. When Da Mo arrived, he saw that the priests were weak and sickly, so he shut himself away to ponder the problem. When he emerged after nine years of seclusion, he wrote two classics: the Muscle/ Tendon Changing Classic (Yi Jin Jing), and the Marrow/Brain Washing Classic (Xi Sui Jing).

The Yi Jin Jing taught the priests how to build their qi to an abundant level and use it to improve health and change their physical bodies from weak to strong. After the priests practiced the Yi Jin Jing exercises, they found that not only did they improve their health, they also greatly increased their strength. When this training was integrated into the martial arts forms, it increased the effectiveness of their martial techniques. This change marked one more step in the growth of the Chinese martial arts: martial arts qigong.

The Xi Sui Jing taught the priests how to use qi to clean their bone marrow and strengthen their immune systems, as well as how to nourish and energize the brain, helping them to attain Buddhahood. Because the Xi Sui Jing was hard to understand and practice, the training methods were passed down secretly to only a very few disciples in each generation. Da Mo died in the Shaolin Temple in A.D. 536, and was buried on Xiong Er Mountain.

During the revolutionary period between the Sui dynasty and the Tang dynasty in the fourth year of Tang Gao Zu Wu De, A.D. 621,Qin king Li, Shi-ming had a serious battle with Zheng king Wang, Shi-chong. When the situation was urgent for the Qin king, thirteen Shaolin monks assisted him against the Zheng. Later, Li, Shi-ming became the first emperor of the Tang dynasty (A.D. 618-907), and he rewarded the Shaolin Temple with 40 qing (about 600 acres) of land. He also permitted the Temple to own and train its own soldiers.

(The above is an excerpt from Tai Chi Chuan Classical Yang Style—The Complete Long Form and Qigong by Dr. Yang, Jwing-Ming.)