Historical Survey of Chinese Martial Arts - Part 2 | YMAA
Skip to main content
FREE Shipping Order Over $70. (US Only, Conditions apply)    |   Up to 40% Off. Exclusions apply. 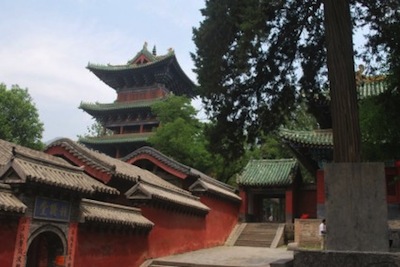 In order to have a better understanding of the rich cultural history of Chinese Martial Arts, please begin with Part 1.

During the Song dynasty (A.D. 960-1278) the monks of the Shaolin Temple continued to gather more martial skills from outside sources. They blended these arts into the Shaolin training. During this period, one of the most famous Shaolin martial monks, Jueyuan, traveled around the country in order to learn and absorb high levels of martial skill into Shaolin training. He went to Lan Zhou to meet one of the most famous martial artists, Li Sou. From Li Sou, he met Li Sou's friend, Bai, Yu-feng and his son. Later, all four returned to the Shaolin Temple and studied together.

After ten years of mutual study and research, Li Sou left Shaolin; Bai,Yu-feng and his son decided to stay and became monks. Bai, Yu-feng's monk's name was Qiu Yue Chan Shi who was known for his bare hand fighting and narrow blade sword techniques. According to the book Shaolin Temple Record, he developed the existing eighteen Buddha hands techniques into one hundred and seventy-three techniques. Moreover, he compiled the existing techniques contained within Shaolin and wrote the book, The Essence of the Five Fists. This book included and discussed the practice methods and applications of the five fist animal patterns. The five animals included dragon, tiger, snake, panther, and crane. This record confirms that the five animal patterns martial skills already existed for some time in the Shaolin Temple.

From the same source, it is recorded that in the Yuan dynasty, in the year A.D. 1312, the monk Da Zhi came to the Shaolin Temple from Japan. After he studied Shaolin martial arts (bare hands and staff) for nearly thirteen years A.D., in 1324, he returned to Japan and spread Shaolin gongfu to the Japanese martial arts society. Later, in A.D.1335, another Buddhist monk named Shao Yuan came to Shaolin from Japan. He mastered calligraphy, painting, chan theory (i.e., Zen) and Shaolin gongfu during his stay. He returned to Japan in A.D.1347 and was considered and regarded as "country spirit" (guohuen) by the Japanese people. This helps to confirm that Shaolin martial techniques were imported into Japan for at least seven hundred years.

Later, when the Manchus took over China and established the Qing dynasty, in order to prevent the Han race (pre-Manchurian Chinese) from rebelling against the government, martial arts training was forbidden from (A.D. 1644 to 1911). In order to preserve the arts, Shaolin martial techniques spread to laymen society. All martial arts training in the Shaolin Temple was carried out secretly during this time. Moreover, the Shaolin monk soldiers decreased in number from thousands to only a few hundred.

According to Shaolin Historical Records, the Shaolin Temple was burned three times from the time it was built until the end of the Qing dynasty A.D. 1911. Because the Shaolin Temple owned such a large amount of land and had such a long history, it became one of the richest temples in China. It was also because of this that Shaolin had been attacked many times by bandits. In ancient China, bandit groups could number more than ten thousand; robbing and killing in Chinese history was very common.

During Qing's ruling period, the most significant influence on the Chinese people occurred during A.D. 1839-1840, (Qing Dao Guang's twentieth year.  This was the year that the Opium War between Britain and China broke out. After losing this war, China started to realize that traditional fighting methods, i.e., using traditional weapons and bare hands, could not defeat an opponent armed with guns.  The values of the traditional Chinese culture were questioned.  The traditional dignity and pride of the Chinese people started to waver, and doubt that China was the center of the world began to arise.  Their confidence and trust in self-cultivation weakened, and this situation continued to worsen.

In A.D. 1900, (in Qing Guangxu's twentieth year, when the joint forces of the eight powerful countries of Britain, France, the United States, Japan, Germany, Austria, Italy, and Russia occupied Beijing in the wake of the Boxer Rebellion.  Chinese dignity was degraded to its lowest point. Many Chinese started to despise their own culture, which had been built and developed on principles of spiritual cultivation and humanistic morality. They believed that these traditional cultural foundations could not save their country.  Instead they needed to learn from the West. Chinese minds started to open and guns and cannons became more popular.

After 1911, the Qing dynasty fell in a revolution led by Dr. Sun, Yat-sen. Due to the mind-expanding influence of their earlier occupation, the value of traditional Chinese martial arts was reevaluated, and their secrets were gradually revealed to the public. From the 1920s to the 1930s, many martial arts books were published.

However, this was also the Chinese Civil War period, during which Chiang, Kai-shek tried to unify the country. Unfortunately, in 1928, there was a battle in the area of the Shaolin Temple, and the temple was burned for the last time by warlord Shi, You-san's military. The fire lasted for more than forty days, and all the major buildings were destroyed. The most priceless books and records on martial arts were also burned and lost.

It was also during this period that, in order to preserve Chinese martial arts, President Chiang, Kai-shek ordered the establishment of the Nanking Central Guoshu Institute at Nanking in 1926. For this institute, many famous masters and practitioners were recruited. The traditional name for martial techniques (wushu) was renamed Chinese martial techniques (zhong guo wushu) or simply country techniques (guoshu). This was the first time in Chinese history that under the government's power, all the practitioners of the different styles of Chinese martial arts sat down and shared their knowledge. Unfortunately, after only three generations (that is, the time it takes to train a group of students from novice to advanced), World War II started in 1937 and all training was discontinued.

In 1945, after the Second World War, mainland China was taken over by communists.

Under communist rule, all religions were forbidden. Naturally, all Shaolin training was also prohibited. Later, under the communist party, wushu training was established by the Chinese Athletic Committee. In this organization, the communist party purposely deleted portions of the martial training and their applications in order to discourage possible unification of martial artists against the government.

From Chinese history, it is well known that almost all revolutions that succeeded did so due to the unification of Chinese martial artists. Unfortunately, only the aesthetic and acrobatic parts of the arts were preserved and developed. Eventually, it became known that the athletes trained during this period did not know how to fight or defend themselves. Performance was the goal of this preservation. This situation was not changed until the late 1980s. After the communist government realized that the essence of the arts—martial training and applications—started to die out following the death of many traditional masters, the traditional training was once again encouraged. Regrettably, many masters had already been killed during the so-called "Cultural Revolution," and many others had lost their trust of the communist party and were not willing to share their knowledge.

In order to bring Chinese wushu into Olympic competition, China expended a great deal of effort to promote it. With this motivation, the Shaolin Temple again received attention from the government. New buildings were constructed and a grand hotel was built. The Shaolin Temple became an important tourist attraction. In addition, many training activities and programs were created for interested martial artists around the world. Moreover, in order to preserve the dying martial arts, a group called the Martial Arts Investigation Team was organized by the government. The mission of this team was to search for surviving old, traditional masters and to put their knowledge in books or videos.

This situation was very different in Taiwan. When Chiang, Kai-shek retreated from mainland China to Taiwan, he brought with him many well-known masters, who passed down the Chinese martial arts there. Traditional methods of training were maintained and the arts were preserved in the traditional way. Unfortunately, due to modern lifestyles, not many youngsters were willing to dedicate the necessary time and patience for the training. Therefore, the level of the arts reached the lowest level in Chinese martial history. Many secrets of the arts, which were the accumulation of thousand years of human experience, rapidly died out. In order to preserve the arts, the remaining secrets began to be revealed to the general public and even to Western society. It is good that books and videotapes have been widely used both in mainland China and Taiwan to preserve the arts.

Many of the Chinese martial arts were also preserved in Hong Kong, Indo-China,
Malaysia, the Philippines, Indonesia, Japan, and Korea. It is now widely recognized that in order to preserve the arts, all interested Chinese martial artists should be united and share their knowledge openly.

If we look back at the martial arts history in China, we can see that in the early 1900s, the Chinese martial arts still carried on the traditional ways of training. The level of the arts remained high. But from then until World War II, the level of arts degenerated very rapidly. From the war until now, in my opinion, the arts have not reached even one-half of their traditional levels.

All of us should understand that today's martial arts training is no longer useful for war. The chances for using it in self-defense have also been reduced to a minimum compared to that of ancient times. This is an art whose knowledge has taken the Chinese thousands of years to accumulate. What remains for us to learn is the spirit of the arts.  From learning these arts, we can discipline ourselves and promote our understanding of life to a higher spiritual level.  From learning the arts, we can maintain healthy conditions in our physical and mental bodies.

(The above is an excerpt from Tai Chi Chuan Classical Yang Style—The Complete Long Form and Qigong by Dr. Yang, Jwing-Ming.)