A Few Fighting Techniques Found in the Dukkha Series | YMAA
Skip to main content
FREE Shipping Order Over $70. (US Only, Conditions apply)    |   Up to 40% Off. Exclusions apply. 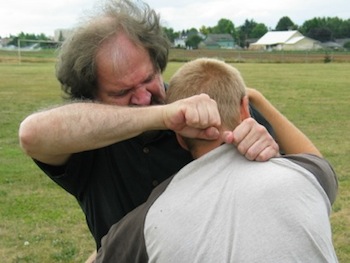 A Few Fighting Techniques Found in the Dukkha Series

Many kind reviewers for Dukkha: The Suffering, Dukkha: Reverb, and Dukkha: Unloaded have commented on the realistic violence, in particular the fight scenes. This is always nice to hear because I work hard to infuse the scenes with authenticity and truth. After spending 30 years around man's inhumanity to man, first as a Military Policeman in Vietnam and then as a street cop for 25 years in Portland, Oregon, I find many authors' and movie directors' depiction of violence to be sadly lacking or simply off base.

Many kind reviewers for Dukkha: The Suffering, Dukkha: Reverb, and Dukkha: Unloaded have commented on the realistic violence, in particular the fight scenes. This is always nice to hear because I work hard to infuse the scenes with authenticity and truth. After spending 30 years around man's inhumanity to man, first as a Military Policeman in Vietnam and then as a street cop for 25 years in Portland, Oregon, I find many authors' and movie directors' depiction of violence to be sadly lacking or simply off base.

It's been my experience that the human body is at once fragile as fine china and as resilient as an old redwood. Some people die after getting punched in the jaw and others survive multiple bullet wounds. I know of two cases, one man and one woman, who were shot five times in their heads, and survived. The female even fought the police and the EMTs.

Sam Reeves, the protagonist in the Dukkha series, is a veteran police detective and a martial artist with nearly 30 years of training and teaching. His experience as a former point karate fighter, full-contact fighter, and a police officer, combined with his understanding of the human body, has led him to collect a number of go-to techniques.

Here are seven of Sam's favorites.


Sam targets this highly vulnerable nerve in all three Dukkha books. Imagine you're wearing pants with a stripe down the outside of each pant leg. That is roughly the path the peroneal nerve takes from your hip to the side of your knee. It extends farther down but it's the upper leg that we're interested in. The area most vulnerable to impact is about a third of the way down from the hip. It hates to be struck with an upper angle roundhouse kick (hit with your shin), a horizontal sidekick, or a slightly downward roundhouse kick. Some fighters prefer one angle, but all are good.

If you have been kicked in the peroneal you know it produces pain and nausea. You either had trouble standing or you spiraled to the floor as if the impact point was a delete button. Most often there is some degree of somatic reflex arc, meaning the attacker's upper body folds in the direction of the struck leg. As the kicker, this gives you the option of kicking it again or quickly moving in to execute a takedown in the direction he's leaning.

You can also punch it, especially effective when the attacker is down with his leg braced on the floor, and you can hit it with a knee or elbow strike. I head butted a guy there once.

This highly vulnerable boney ridge is found on the back of the skull just above the neck. Good target to hit with a thumb-side hammer in a clinch.

This is a fun target to pronounce (say it fast five times) and an easy one to hurt, even with a medium force impact. A hard blow could cause serious injury and even death. Not only can the boney ridge and the brain tissue directly underneath be damaged, but tissue on the opposite side of the brain can be affected too. Since the brain is basically suspended in liquid, a blow to the back of the head sends it slamming into the opposite side of the skull.

A physician friend and a veteran martial artist said this about the target:

"Striking the occipital protuberance can stun and cause someone to lose consciousness. Worse, they might suffer bruising and/or bleeding in the brain, which could cause them to go into a coma. They could go blind because the part of the brain that processes vision is right under that occipital protuberance. They could also suffer brain damage since the front of the brain that analyzes information can be shoved against the front of the skull. They could even die. In my opinion, this is a dangerous target for the martial artist who doesn't want to permanently harm an assailant."

Strike this target only in a life and death situation. Remember, even a light blow can stun. 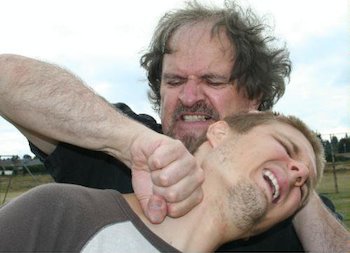 The brachial plexus is a cluster of nerves half way between the front of the neck and the side. Here I'm striking it with a thumb-side hammer fist.

The brachial plexus is located on both sides of the neck half way between the front and side. Hitting in front or behind the cluster of nerves will hurt, but it won't have the same debilitating effect as hitting directly into the nerve cluster. Your fist, forearm, or shin should be delivered heavily and stay on target for about ¾ of a second—longer isn't better—to allow the fluid shock to penetrate the nerve cluster and generate its nasty effect. A snapping type blow, such as a back fist, is often less affective because—and this is arguable—it delivers less energy. That said, YMAA author, Kris Wilder, told me he unintentionally dropped a guy to his knees with a snapping back fist to the brachial plexus.

I prefer, and so does Sam Reeves, to hit the brachial plexus with my inner or outer forearm. When coupled with a drop step, the arm hits fast, hard and penetrates deeply. You can also hit it with a back fist, hammer fist, knife hand, foot, or shin. Watch any of the MMA knockout compilation clips on YouTube and you're bound to see a kick to the brachial plexus.

As always, be justified because the potential for serious injury is great whenever the neck is stuck.

The common carotid arteries begin at the heart and travel upward along each side of the neck to supply the brain with oxygenated blood. When one or both arteries are constricted, the blood supply to the brain is slowed, not stopped as is often believed. When applied just right, the recipient loses consciousness within seconds.

In reality, it can be difficult to apply the hold "just right" because most attackers don't want you to do it to them. So the fight is on to get correct application. Since there is no referee in the street to halt the fight and slap-outs aren't acknowledged, things can get rough and neck injuries happen. As of this writing there is no known death from carotid constraint in a training facility. But there have been many in the street.

Here is the procedure after you have applied a carotid constraint.

You feel the attacker's body become slack and then go completely limp.

If the two of you are standing, carefully lower him to the ground. Don't drop him and don't lower him by holding onto his neck. Both can cause injury.

Immediately relax the constriction but keep your arm around his neck until you're able to flee or get help to restrain him.  He might be out for only five seconds, or 30. He might be faking it.

Some people awaken passive and confused, while others come around still fighting.

Maintain your arm in place without constricting his arteries until you can determine his demeanor. Should he wake up fighting, you're in position to constrict again.

When he goes out the second time, again release the constriction but not the hold.

Continuing to constrict the attacker after he loses consciousness can cause brain damage or death. If he doesn't awaken from your constriction, immediately call for an ambulance.

Be justified to use this level of force.

This is one of many ways to apply carotid constriction. Notice that I'm dragging my elbow up his chest and into his neck. This affects a powerful constriction.

You can't drive the nose up into the brain (someone always asks), but a hard punch or kick can knock it over to one side, damage the nasal septum (the division between the two nostrils inside the nose), and injure the cartilage, nerves and mucous lining.

If you haven't experienced a hard hit to the nose it's hard to grasp how much misery it brings. Smack yourself in the nose right now. Come on, do it harder. Hurts, eh? Imagine a big, Oregon logger doing it with his boot.

Incredibly, there are people out there who can tolerate hard hits to the nose and keep on fighting. We see this all the time in full-contact competition. A street assailant might not notice your nose shot because his brain is sopped with adrenaline, drugs, alcohol, or his mental illness might make him tolerant to pain. Though it might not stop some people, a blow to the nose will make everyone flinch, blink rapidly, or tear up, at least for a second or two. That is your window of opportunity. That is when you execute your follow-up kicks, punches, or takedowns. Or run.

Sam Reeves clobbers a few people in the nose; he crushes one (see clip) and rips another man's nostrils (see picture).

Sam uses this in Dukkha: Unloaded. When the threat drops his chin, crush the nose to force him to lift it so you can insert your arm to apply a carotid constriction. 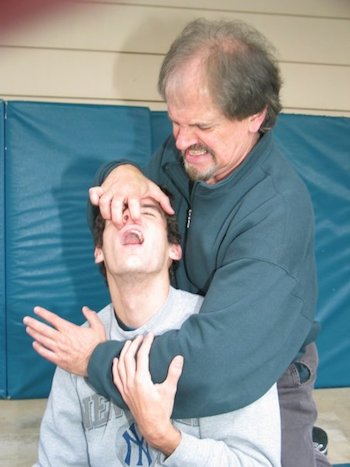 When the threat drops his head, yank it up by his nostrils so you can slip your arm around his neck for constriction. In Dukkha: Reverb, Sam rips a killer's nostrils. (It's a gross technique during allergy season).

In Dukkha: Unloaded, Sam's cabbie friend uses this technique against someone trying to pull him from his car. 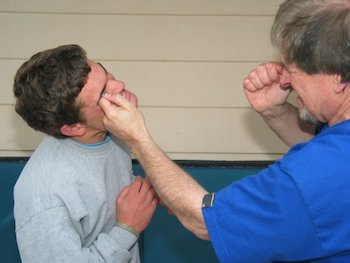 Once you've grabbed his eyelid, you can pull it, pinch it, or twist it. Do it fast to shock and then hit him.)

Sam uses this excruciating technique in two of the Dukkha books to encourage people to move. 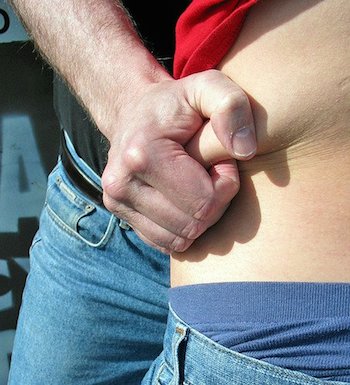 Clamp onto his love handle with all five fingers, squeeze, and twist forward and back. Use your nails for added pain. If the threat's hands are free, you should squeeze just for a second or two to get the person to move.