Improving Quality of Qi's Manifestation | YMAA
Skip to main content
FREE Shipping Order Over $70. (US Only, Conditions apply)    |   Up to 40% Off. Exclusions apply. 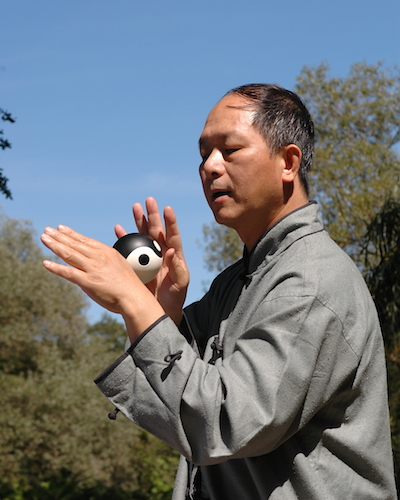 Here we will discuss how the quality of qi's circulation or manifestation can be improved. First, we should recognize that from Chinese martial art history, it was not until the fifth century that Chinese internal styles were developed, recognized, and practiced.

Here we will discuss how the quality of qi's circulation or manifestation can be improved. First, we should recognize that from Chinese martial art history, it was not until the fifth century that Chinese internal styles were developed, recognized, and practiced.

The most influential person in this practice was the Indian monk Da Mo. Da Mo, whose last name was Sardili and who was also known as Bodhidarma, was once the prince of a small tribe in southern India. He was of the Mahayana school of Buddhism and was considered by many to have been a bodhisattva, or an enlightened being, who had renounced nirvana in order to save others. From the fragments of historical records, it is believed that he was born about A.D. 483.

Da Mo was invited to China to preach by the Liang Wu emperor. He arrived in Canton, China, in A.D. 527 during the reign of the Wei Xiao Ming emperor  (A.D.16–528) or the Liang Wu emperor (A.D. 02–557). When the emperor decided he did not like Da Mo's Buddhist theory, the monk withdrew to the Shaolin Temple. When Da Mo arrived, he saw that the priests were weak and sickly, so he shut himself away to ponder the problem. When he emerged after nine years of seclusion, he wrote two classics: Muscle/Tendon Changing Classic (Yi Jin Jing,) and Marrow/Brain Washing Classic (Xi Sui Jing).

The Yi Jin Jing taught the priests how to build their qi to an abundant level and use it to improve health and change their physical bodies from weak to strong. After the priests practiced the Yi Jin Jing exercises, they found that not only did they improve their health, but also they also greatly increased their strength. When this training was integrated into the martial arts forms, it increased the effectiveness of their martial techniques. This change marked one more step in the growth of the Chinese martial arts: martial arts qigong.

The Xi Sui Jing taught the priests how to use qi to clean their bone marrow and strengthen their immune systems, as well as how to nourish and energize the brain, helping them to attain Buddhahood. The Xi Sui Jing was difficult to understand and practice because the training methods were passed down secretly to very few disciples in each generation. Da Mo died in the Shaolin Temple in A.D. 536 and was buried on Xiong Er Mountain. If you are interested in knowing more about Yi Jin Jing and Xi Sui Jing, please refer to the book, Qigong–The Secret of Youth, published by YMAA Publication Center.

From Da Mo's muscle/tendon changing theory, it has been understood that in order to condition your physical body to a higher level, you must "use the mind to lead the qi and from qi's manifestation, the power and strength are initiated and conditioned." Therefore:

From this, you can see that in order to manifest your qi to a higher efficiency, you must know how to regulate your mind to a higher concentration. It has been experienced and understood that meditation is the way to reach this goal.

In order to increase the power of qi's manifestation, we must have an abundant and smooth qi circulation. Since I (i.e., current) is proportional to ∆V (i.e., mind), it is understood that if the mind is stronger and more focused, the qi's circulation will be more fluent and abundant. Not only that, the power will be significantly increased since power is proportional to I2. From the formula, it can also be seen that since I is in reverse proportion to R (i.e., resistance), then if we are able to reduce R, the circulation of I can also be improved significantly. The way of reducing R is relaxation of the physical body.

Therefore, the quality of qi's manifestation depends on how the mind can be focused and also how deep the physical body can be relaxed. To know more about how to regulate your mind, please refer to the book Qigong Meditation–Embryonic Breathing. To learn how to relax your physical body, please refer to the book The Root of Chinese Qigong. Both are available from YMAA Publication Center. The result of this mind training is to make the mind more focused and this will result in the increased sensitivity. This means the entire body's awareness and alertness will be increased. This is the crucial key of surviving in a battle.

To apply the taiji ball qigong into martial arts and health effectively, a practitioner should learn and understand martial grand qi circulation. If he does not apply this circulation technique into the taiji ball qigong practice, the qi led will be weak. Naturally, the manifestation of qi will not be as strong as well. This martial grand qi circulation training was commonly kept as top secret in all Chinese martial styles. If the opponent knew this secret, he would have the same advantage in manifesting his fighting power to its maximum.

Grand qi circulation (da zhou tian) is an advanced qigong qi circulation practice. From this practice, a practitioner learns how to exchange the qi with surrounding objects. These objects can be common non-living objects, such as the air, ground, or taiji ball. They can also be of things alive such as trees, grass, animals, or humans.

Taiji ball qigong adopts martial grand qi circulation techniques. This is because taiji ball qigong was created and developed in martial arts society in which the original purpose of the training was to improve fighting capability. From taiji ball grand qi circulation training, a practitioner is able to communicate and exchange his qi with the ball and also with a partner through the ball.

To understand martial grand circulation, you should understand the concepts of a human's two polarities connected by the thrusting vessel (chong mai) (i.e., spinal cord), and you should also know the body's seven pairs of corresponding gates (qi dui xue).

Among these seven, the two pairs that are the most important are huiyin (yin) and baihui (yang), and yinjiao (yin) and mingmen (yang). Huiyin is connected to baihui through the thrusting vessel, which establishes the central balance of qi distribution in the body.

Yinjiao is also connected to mingmen through the thrusting vessel and joins the conception vessel in the front and the governing vessel in the back, providing front and rear qi balance to the body. These four are the main qi gates.

Tiantu controls vocal vibrations and generates the sounds of hen (yin) and ha  (yang) for manifestation of qi. It is a gate of expression, and its energy is balanced with yintang, where the spirit resides. When spirit is high in yintang, the energy manifested is strong, and alertness and awareness are high. Jiuwei and lingtai connect to the heart (emotional mind) and offer a strong driving force to elevate the spirit. These four minor gates control manifestation of qi in the body. So the eight gates are defined. If you wish to know more about qi gates, please refer to the book, Qigong Meditation–Small Circulation, available from YMAA Publication Center.

(The above excerpt is from Tai Chi Ball Qigong For Health and Martial Arts by Dr. Yang, Jwing-Ming and David Grantham.)