The Heart of Taekwondo | YMAA
Skip to main content
FREE Shipping Order Over $70. (US Only, Conditions apply)    |   Up to 20% Off. Exclusions apply.

Home >> Articles >> The Heart of Taekwondo 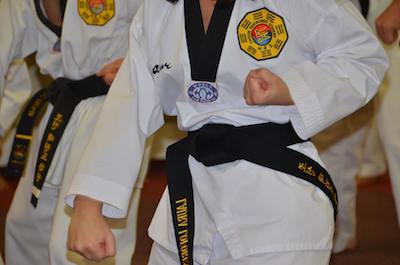 The Heart of Taekwondo

When the heart of taekwondo beats, it gives life to the advancement of supreme discipline, the achievement of noble character, and the cultivation of an enlightened worldview. It breaks the bonds that bind us to the Earth and again, as adults, allows us to feel the wind beneath our feet rather than merely around them.

When the heart of taekwondo beats, it gives life to the advancement of supreme discipline, the achievement of noble character, and the cultivation of an enlightened worldview. It breaks the bonds that bind us to the Earth and again, as adults, allows us to feel the wind beneath our feet rather than merely around them. It fuels a passion unrealized by quotidian man and supports the Buddhist doctrine of Beginner's Mind, filling us with a continuous sense of wonder and renewal. It is a strong heart, not predicated on simple physicality, but supplemented by an unhindered stream of benevolent intent bent on enriching the common good. And, with each thump, the elements of confidence grow, urging us to appreciate life's path rather than being blinded by its daily perils.

The heart of taekwondo cannot be found on an anatomical chart or described in medical texts. It refuses to be broken and has the resiliency to mend quickly. It beats to a personal rhythm, uninfluenced by the proximity of others and, while easily pierced by Cupid's arrow, it remains impervious to the barbs of malefactors critical of Korean martial tradition.

Within its chambers flows the chemistry of respect for all living things regardless of taxonomic hierarchy, chronological placement, social status or scale. The unique relationship between junior and senior as dictated by Confucian ethic is implied in all interactions between teacher and student, venerated master and worthy disciple. And, where dissention arises, a clear, meditative mind tempered by measured yet decisive behavior, dominates.

But, the heart of taekwondo, in order to maintain the extraordinary health vital to any major bodily component, demands precise, frequent and vigorous exercise. Defined by its very nature, the national combat art of Korea is first and foremost an action philosophy where words can never replace movement. And, since the road to hell is paved with good intentions, so the heart will fail if will is not bolstered by technical superiority manifested through repetitive, martial motion.

Yet, sadly, the heart of taekwondo is not impervious to injury, doubt and discouragement. It, like any organ, can fall prey to unlooked-for disease that, if left unchecked, will ultimately result in severe consequences. The demon of self-doubt, similar to existing cardiovascular maladies, can have a devastating effect on the spirit, as can a perceived lack of challenge or constant, unflagging negative criticism on the part of an inexperienced or insecure instructor. 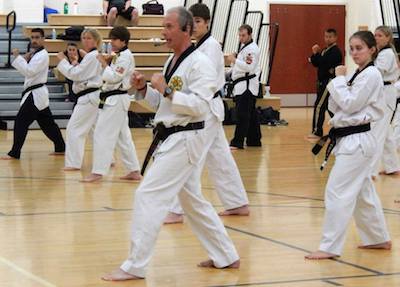 And, too, the heart of taekwondo must be a brave heart, resolute in the face of adversity, courageous against all odds. It must exhibit the fortitude of enduring strength, both physically and emotionally and, subsequently, beat in sync with others who temporarily require an umbrella of comfort in times of extreme need or unmitigated suffering. And rightly so, since to many, the martial artist represents a superman of sorts, prepared to rescue those less fortunate in the ways defensive strategy, mentally and physically.

Nevertheless, while fierce, the heart of taekwondo must remain soft and pliant as well, mirroring the Eum/Yang; that most classic of Taoist symbols so aptly illustrating the duality of opposites compounded by a flexible acceptance of constant change. And so, naturally, compassion, amplified by the ancient wisdom of the Hwarang-do, not to inflict needless pain through the use of unwarranted force in battle, remains a hallmark of the sincere martial artist.

Not surprisingly, the heart of taekwondo has been known to skip a beat at the thrill of competition, knowing full well that years, if not decades, of focused training composed of hard work, sweat and blood, ultimately distills down to one, single moment in time where one is destined to win or lose; where the exceptional athlete is given the opportunity to stand atop the podium adorned in Olympic gold.

Conversely, any organism with a beating heart can undergo attack. Frightening yet recoverable at best, fatal at worst, the trauma caused by a medical event of this nature, at minimum, is certain to leave lasting scars not soon forgotten. It is when political machinations, self-aggrandizement and unbridled egos come into play that the heart of taekwondo is forced to tolerate unbearable stress threatening to stop its constant, stable cadence in its tracks. Too often, organizations and individuals, primarily driven by blind ambition, have permitted dollars to trump tradition; victory in the ring at any cost to eclipse longstanding martial virtues intended to govern malicious deeds and a clear lack of sportsmanship.

Since its inception, the historical fabric of the Korean martial arts, here and in Korea have been stained with uncertainty but, at the same time, cleansed by righteous objectives at the behest of men and women who brook no detours on the path to excellence striving for an elevated brand of taekwondo; largely due to these tireless, gallant acts of perseverance, at its very core the heart of taekwondo remains sturdy, munificent, fortified by ritual and capable of such majestic achievement. It beats in time with the maturation process of the martial artist physically, spiritually and intellectually. Its autonomic action frees us to concentrate on basic skill, advanced technique and the unblemished performance of poomsae, hyung or tuls that represent the comprehensive catalog of traditional taekwondo.

Yet, the health of this singularly crucial muscle can never be taken for granted. It must be cautiously protected, professionally nursed back to health when in danger of illness and dynamically stimulated in order to carry on an unwavering pulse of proficiency. Because once the heart of taekwondo stops beating, never to be revived, there is certain to be no taekwondo. No taekwondo. Consider it.

Support the heart of taekwondo with diligence. Nurture it. Cultivate its might and, above all, practice – hard.

(The above article originally appeared in Totally TaeKwonDo magazine March 2014.)