Political Turmoil in Taekwondo | YMAA
Skip to main content
FREE Shipping Order Over $70. (US Only, Conditions apply)    |   Up to 20% Off. Exclusions apply. 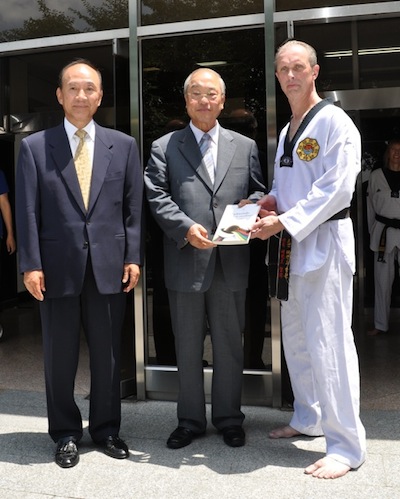 On December 31, 2013, Grandmaster Kyu Hyung Lee, taekwondoist extraordinaire, formally resigned his post as president of the esteemed Kukkiwon after holding the position for a mere matter of months. Quickly replaced by Man Soon Jang, Lee claimed his startling decision was founded on irreconcilable differences between two leading factions; one consisting of officials whose behavior is largely motivated by politics, and a second group of martial artists, spearheaded by Lee, with the purity of taekwondo at heart.

On December 31, 2013, Grandmaster Kyu Hyung Lee, taekwondoist extraordinaire, formally resigned his post as president of the esteemed Kukkiwon after holding the position for a mere matter of months. Quickly replaced by Man Soon Jang, Lee claimed his startling decision was founded on irreconcilable differences between two leading factions; one consisting of officials whose behavior is largely motivated by politics, and a second group of martial artists, spearheaded by Lee, with the purity of taekwondo at heart. Even though the Kukkiwon is no stranger to controversy, this recent debate appears disturbingly divisive. Yet when viewed through the unforgiving lens of history, particularly as it relates to taekwondo, this still-evolving drama comes as no surprise.

It seems everywhere we turn the effects of politics dominate, exerting a profound influence on the future of world events including the way we work, the food we eat and the air we breathe. Additionally, the use of politics as a tool is not unique to ruling powers. On the contrary, politics can manifest its supremacy between two disparate organizations, groups or individual people. This becomes abundantly clear when one considers the true definition of politics, which can be construed as who gets what, when and how. In fact, current and past events prove undeniably that even taekwondo is not immune to the long shadow cast by politics.

Clearly, traditional taekwondo is replete with an enhanced set of moral principles as typified by the Five Tenets consisting of courtesy, integrity, perseverance, self-control and indomitable spirit. As sincere practitioners, many of us would like to think that these virtues have the ability to elevate our art above the political fray. Yet this simply is not the case. Nor is it entirely bad. For, just as natural forces like fire or nuclear fission are indifferent to evil, political intent in and of itself is essentially blind to inequity. It is what humanity makes of these things that ultimately determine their value or risk. At best, political discourse can provide a resolution for debate. At worst, it can usher in despotism and suffering.

Over the course of time, Korean taekwondo has been tossed on a sea of political manipulation, riding the crest of a wave one moment only to be swallowed by a deep trough the next. For example, the turbulent years that spanned the first half of the twentieth century were rudely influenced by the political machinations of the Japanese Occupation and found many native martial artists whose lives were in jeopardy by virtue of their art, emigrating to Japan or China where they were assigned work, or worse, conscripted to serve the very military machine that was actively crushing their homeland.

Here in these foreign lands, the Koreans were oddly enough not only permitted to practice the martial arts forbidden by imperial rule back home, but allowed to earn advancement and teaching credentials as well. Pivotal figures such as General Choi Hong Hi, Won Kuk Lee and Hwang Kee were beneficiaries of this dubious, political aberration. Borrowing from a variety of provincial styles, these pioneers and others would later return to Korea, then under a different sort of domination, albeit more benign, to launch or create martial arts and enduring organizations of their own with a distinctly Korean flavor, yet colored by cultural impressions and methods accumulated abroad.

Later, in 1955, politics again would sculpt the future landscape of taekwondo when General Choi Hong Hi attempted to dissolve the terms tangsoodo, kongsoodo and others, in favor of his newly coined phrase taekwondo in a vigorous attempt to reclaim a national identity seriously injured by a brutal interloper. Despite debate, most historians now agree that it was General Choi who created the name taekwondo based on its close association with the indigenous Korean kicking art and game taekkyun, rather than support an imprimatur gleaned from a foreign nation. Several of the participants at a critical meeting were comfortable with their present method of teaching and found the concept of merging styles objectionable. Great political hurdles needed to be overcome before any decision could be made. Once an agreement was reached, however, the specter of politics again played an important role in the maturation process of taekwondo when General Choi was required to obtain permission to use the new name from President Syngman Rhee. Following heated consideration, consent was finally granted.

Then, during the 1960s, in an effort to unify the various schools existing at the time, the Korea Taekwondo Association sought to eliminate individual kwan identity altogether. Now-famous institutes such as the Moo Duk Kwan, Chung Do Kwan, Oh Do Kwan and Chang Moo Kwan were strongly urged by the Korean government to renounce their independence in favor of a numerical system with an eye on Olympic recognition. And once anything is coupled to government, it begins to resonate with political overtones.

Today, as in times past, political turmoil continues to surround taekwondo. Organizations such as the International Olympic Committee and the World Taekwondo Federation under the direction of Dr. Chungwon Choue have done much to promote taekwondo as an Olympic sport yet are often looked upon by differing interests as diluting the traditional value of the art. However, if the WTF had not risen to the Olympic gold standard created by the international sports community, thus catapulting taekwondo to world prominence, the art may have limped along as a splintered group lacking a central identity and remained essentially a provincial set of fighting skills rather than the most popular martial discipline in the world today with over 90,000,000 practitioners. By the same token, the International Taekwon-Do Federation, perceived somewhat as the champion of traditional taekwondo and brainchild of the late General Choi Hong Hi, has lived in the eye of a political storm for decades while pursuing their quest for Olympic participation. Moreover, there exist institutions similar to the United States Taekwondo Association, presided over by Grandmaster Richard Chun that actively addresses both the martial art and martial sport of taekwondo.

Clearly, politics have played a major role in molding the current model of taekwondo, as we know it today. Nevertheless, the political tradition of taekwondo works both ways. Often, in order to gain an advantage in one area, one must acquiesce in another, personifying the true essence of politics. Let us hope that the contrasting views of conflicting organizations and individuals will not follow the present, tenuous path of world politics, but will be evaluated in a constructive manner permitting taekwondo to continue its evolution as a modern world sport and traditional martial art complete with a rich set of moral principles by which to live.

(The above article originally appeared in the Totally TaeKwonDo magazine, February 2014.)