Account for Adrenaline | YMAA
Skip to main content
Free Shipping (US Only, Min. $70+ Conditions apply)    |   20% Off Everything, Some Exclusions Apply. 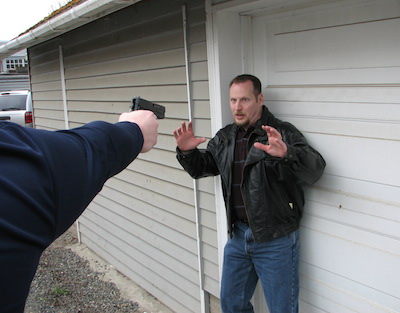 When I took a defensive handgun course several years ago, I was taught to train for handling the survival-stress reaction commonly associated with actual combat. To simulate the reaction, we had to do as many pushups as we could as fast as we could for one minute.

When I took a defensive handgun course several years ago, I was taught to train for handling the survival-stress reaction commonly associated with actual combat. To simulate the reaction, we had to do as many pushups as we could as fast as we could for one minute. Immediately after completing the pushups, we sprinted to the parking lot and raced around the building four times as fast as we could go, covering close to a mile in the process. We then sprinted back into the building and attempted to accurately fire down range under the watchful eye of our instructors.

While I could normally hit the bulls-eye of a static paper target much of the time at 25 feet during shooting competitions, and always put every shot in the black, the first time I attempted to do so after this stress test, I missed the paper completely. It was an eye-opening experience.

When adrenaline courses through your system during a fight, you can be stabbed, shot, or badly mangled and yet persevere, at least until the pain kicks in afterward. Your ability to think rationally is greatly reduced. The good news is that you tend to become stronger and more resilient than usual. The bad news, however, is that you will likely have degraded motor skills, experience tunnel vision, and perhaps even suffer temporary hearing or memory loss.

While precise movements are extraordinarily tough, even imprecise ones like grabbing a wrist or hooking a leg can be problematic even if you are highly trained. If you try to get too fancy, you will hurt your chances for success in a fight. However, gross motor movements, especially those that target vital areas of the adversary's body, can work pretty well.

The more comprehensive and realistic your training is, the better you will perform in actual combat because conditioned responses can help you counteract, or at least work through, the effects of adrenaline. Conversely, the more stressed you are through exertion, fear, or desperation, the harder it is perform. Mostly. A friend of ours, who hijacks planes (from terrorists) for a living, puts it this way:

"The body's reaction under critical incident stress has almost nothing to do with how you think rationally. Instead, it has almost everything has to do with ingrained responses, be they trained ones or instinctive ones. The amygdala will choose. It has the chemical authority to override your conscious thoughts and decisions.

"It also has the chemical authority to enforce its decision despite your conscious will. This is why divers are found drowned yet with full oxygen tanks—something happened to them and the amygdala reacted to that critical incident stress with its preferred strategy—clearing obstructions from the breathing passage. As a general rule, getting stuff out of your mouth is an excellent strategy for a land-based species in land-based confrontations. But spitting out your breathing tube is a terrible strategy under water. The fact is none of those drowning victims really thought they could breathe water. Something happened and their bodies reacted.

"Like a diver in duress, when you face a threat on the street you won't be doing much thinking. Unless you have a very high adrenal threshold and/or a LOT of training. Deliberate thought is slow, taking several seconds to accomplish. That's an eternity in a critical incident. Might as well go get a massage while you're at it…

"Deeply ingrained reactions are far more likely than conscious decisions. And don't even get me started on how much training you have to do to override and replace your body's instinctive responses with new ones. Regardless, you won't be selecting an option from a menu of choices calmly and rationally like you do in the training hall. Your body is going to pick its own response in a maelstrom of sh*t and adrenaline.

"Training then, to me, is all about trying to give the amygdala better choices. Because you won't consciously be deciding on much on 'that day.' Or maybe it's about getting your body so used to adrenal stress that you can actually think, somewhat, during pauses in the action. Or more likely a combination of the two. End of the day, training isn't about what most people think it is.—M. Guthrie, Federal Air Marshal

As Bruce Siddle described in his book, Sharpening the Warrior's Edge, in a violent encounter your heart rate can jump from 60 or 70 beats per minute (BPM) to well over 200 BMP in less than half a second. Elevated heart rate is an easily measurable symptom of the effects of adrenaline, one that can be used to index what happens to you when adrenalized:

Breath control techniques can help you minimize or recover from the effects of adrenaline, particularly if you have enough time to see an attack coming. Begin by breathing in through the nose and out through the mouth following a 4-count process for each step—inhalation, hold, exhalation, hold. In other words, each cycle of combat breathing includes:

When men are confronted with extreme emotional or violent situations, their adrenaline kicks off like a rocket, surging quickly and then dissipating rapidly afterward as well. In a home invasion situation, for example, when the male homeowner shoots the suspect, the killing is likely to take place near the front door. When police officers arrive, they will typically find that the suspect has been shot perhaps two or three times, just enough to make sure he is no longer a threat.

Women, on the other hand, get a much slower, longer-lasting adrenaline surge. It takes longer to get going and dissipates a lot more slowly than you find in men. In that same home invasion scenario, police often find the dead robber in a back bedroom where he had chased and cornered the female homeowner. But here's the kicker. Rather than shooting him a couple of times, she's emptied the gun into him, perhaps even reloading and doing it again.

Interesting difference, huh? An implication is that women have more time to think, but must often defend themselves before becoming adrenalized, whereas men get the advantages and disadvantages of adrenaline without the clear-headed ability to plan.

The above is an excerpt from Scaling Force: Dynamic Decision Making under Threat of Violence by Rory Miller and Lawrence A. Kane.