Never Hit A Girl…Unless She's Armed | YMAA
Skip to main content
FREE Shipping Order Over $70. (US Only, Conditions apply)    |   Up to 20% Off. Exclusions apply. 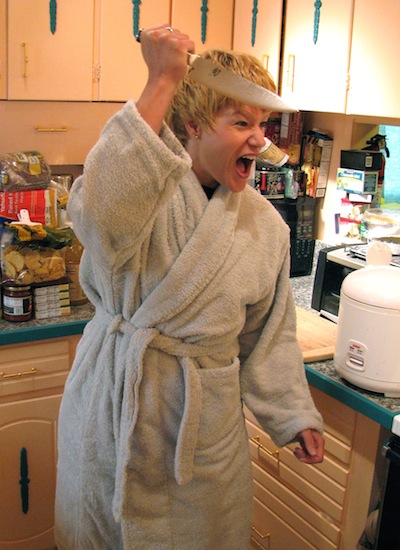 Sun Tzu and Miyamoto Musashi made no distinctions regarding gender. To them all adversaries were defined as combatants. In today's world, distinctions of gender are made by friends, family, police, and the courts. The role of combatant is, oftentimes, secondary. While experienced bouncers, bodyguards, law enforcement officers, soldiers, jail guards, and martial artists know that women can be just as dangerous, or possibly even more so than men, (such as instinctively going for the eyes during an attack) the courts don't often see it that way.

Sun Tzu and Miyamoto Musashi made no distinctions regarding gender. To them all adversaries were defined as combatants. In today's world, distinctions of gender are made by friends, family, police, and the courts. The role of combatant is, oftentimes, secondary.

While experienced bouncers, bodyguards, law enforcement officers, soldiers, jail guards, and martial artists know that women can be just as dangerous, or possibly even more so than men, (such as instinctively going for the eyes during an attack) the courts don't often see it that way. If the "big, burly man" strikes the "tiny helpless woman," even in a case of legitimate self-defense, judges and juries will naturally see the size, gender, and strength differential, and take that into account. Stuff like that usually ends badly. Who goes to jail and/or loses the lawsuit, or whatever? Most often, it is the guy. Not always, of course, but commonly enough to be worrisome.

Gender differences can become particularly challenging if you are caught by surprise, reacting instinctively to the situation. Because of your "fight-or-flight" reflex, it can be normal to lash out responsively, yet plays poorly in the court of law as well as the court of public opinion. If you have an occupation that deals with violence on a regular basis, you may be somewhat better prepared from long experience. Regardless, excess caution in such instances is almost always prudent. Act as if you are on live television. Who knows, with all the camera phones, video cameras, closed circuit televisions, and recording technology out there—perhaps you are.

For example, Kane, who supervises security personnel at a football stadium, is much more careful when tangling with females at the games than he is with males. In the last few years, incidents of intoxicated, out-of-control female fans have been on the rise rather dramatically. While Kane and his team are not supposed to use countervailing force against the fans, as that is what the police are there for, in practical reality there are many times that law enforcement does not arrive in time to keep security personnel from needing to use hands-on contact for the safety of all involved.

In those instances, he does his best to verbally control the situation. Further, he tries to bring along enough other staff so that the aggressive individual will feel outnumbered and, hopefully, become more compliant. If that does not work, or if he does not have time to gather his crew, he does his best to use open-hand techniques—nothing that will draw blood or, hopefully, lead to visible or lasting injuries. Lawyers can wreak havoc with that sensational sort of stuff.

He does that with guys too, of course, but takes greater care with women due to the perceived inequities in size and strength. When you are operating in a public venue packed with witnesses, cameras, and various recording devices, you really have to watch your step. All in all, however, he'd much rather eat a punch from most women without responding with force than take a hit from most men. As a martial artist, he has a decent chance of controlling aggressive people without hurting them, but there really are no absolutes when it comes to self-defense. Simple things like pushing someone over can cause a fatal accident if his head hits something hard like a stair or a curb.

This is an important concept on the street too. As stated previously, a continuum of force should always be applied judiciously to preserve your safety as the situation warrants. Your ultimate goal should be to apply sufficient force to effectively control the situation and keep yourself from harm without overdoing anything. Reasonable force in legal terms is generally considered only that force reasonably necessary to repel an attacker's force.

While women can be just as dangerous as men, the courts don't often see it that way. When a big strong man strikes a small weak woman, even in a case of legitimate self-defense, judges and juries will naturally see the size, gender, and strength differential and take that into account. When you beat someone down, it is awfully hard to prove you acted reasonably if the other guy is a girl… unless she's armed with some sort of weapon. Then all bets are off.

Unfortunately, "reasonably necessary" is a vague term usually associated with what a "reasonable person" would think necessary. This so-called reasonable person is a fictitious composite of all the reasonably prudent people in a given cross-section of life. Whether the ordinary person acted reasonably will likely be judged against the reasonably prudent, similarly situated ordinary person in the appropriate geographic area. Everyone starts out at this level, but other personal attributes may heighten their required standard of prudence. Trained martial artists, professional fighters (for example, MMA fighters, boxers, or wrestlers), military, and law enforcement personnel are almost always held to a higher standard than ordinary people.

The cornerstone of a legitimate claim of self-defense is the innocence of the claimant. You must be entirely without fault. If you initiate the conflict, you cannot claim self-defense. If you allow a conflict to escalate into a lethal situation when it could have been avoided, you share some degree of culpability and, once again, cannot claim self-defense.
Depending on the circumstances, almost any form of physical assault can be considered deadly force. In Washington State, deadly force is defined as "The intentional application of force through the use of firearms or any other means reasonably likely to cause death or serious physical injury." (Revised Code of Washington, RCW 91.16.010)

Other jurisdictions will have similar definitions. In general, any blow delivered powerfully and deliberately to a vital part of the body may be construed as deadly force so long as it can be shown that it was struck with the intention, or predictable likelihood, of killing. That means that simply smacking someone upside the head could conceivably be considered deadly force.

The courts are more likely to interpret a blow as deadly force if the person delivering
it is physically much stronger than the victim, a professional fighter, a trained martial artist, or an assailant who attacks with extreme savagery.* Unfortunately that "physically stronger than the victim" part is rather hard to avoid if you are a male fighting a female unless you are fairly small or she is unusually large.

Equal force doctrines require law-abiding citizens to respond to an attack with little or no more force than that which he perceives is being used against him. In some places, the law clearly specifies that equal force must be exactly equal. The attacked can respond with no more force than that by which he is threatened—slap for slap, punch for punch, kick for kick, or deadly weapon for deadly weapon. Once again, that's pretty tough if you're a guy and your adversary is a girl. Whatever you do may easily be perceived as figurative or literal overkill. Everything changes when weapons are involved, however. An armed opponent clearly has the advantage, so you have much more leeway in your response.

Disparity of force between unarmed combatants is measured in one of two ways. It exists if (1) the victim is being attacked by someone who is physically much stronger or younger or (2) the victim is being attacked by two or more assailants of similar or equal size. In such cases, you may legitimately be able to exert potentially lethal force to defend yourself. Regardless, nowhere can a person legally respond to an assault of slight degree with deadly force.

A great majority of states, in fact, require that law-abiding citizens avoid conflict whenever possible. It is best to withdraw, leaving the scene entirely. It is always a good idea to retreat from a belligerent party who threatens you, unless the attack is so savage that there is not sufficient time to escape or unless withdrawing (or leaving cover in the case of a gunfight) would increase your vulnerability.

The only exception to this rule is within the confines of your own home (or in some places your place of business). In most cases if someone breaks into your home and assaults you, you do not legally need to attempt to retreat. In many cases, it may be prudent to do so anyway, however. This is not true in all jurisdictions, though, so check your local laws carefully. This statute is often called a "castle doctrine."

The bottom line is that in the eyes of the court, you must also be in reasonable fear for your life or someone else's prior to applying countervailing force. That's awful hard to prove if the other guy is a girl, unless she's armed with some sort of weapon. If you are cornered and have to fight, you clearly do whatever you have to in order to assure your safety and well being. It is essential, however, to make a commitment to yourself to use physical force wisely. Never hit a girl… unless she's armed.

* An example of "extreme savagery" in the eyes of the law would be gratuitously raining blows upon a fallen opponent who has obviously given up the conflict, even if he started the fight in the first place.

(The above excerpt is from The Little Black Book of Violence—What Every Young Man Needs to Know about Fighting by Lawrence A. Kane and Kris Wilder.)