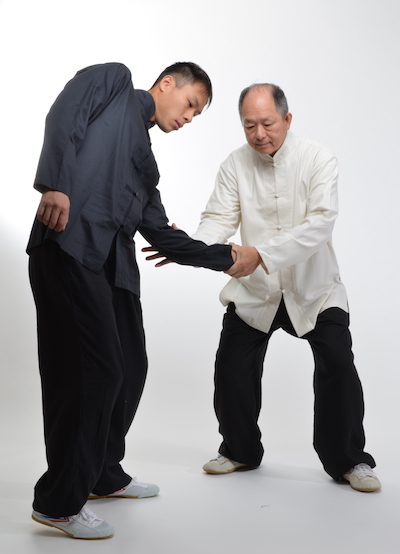 What is Qin Na?

Taijiquan (太極拳) was originally developed for combat in ancient times. Its fighting theory is to use the soft against the hard, and to use the round to neutralize the straight or square. In order to achieve this goal, the body must be soft and the movements must be smooth and natural. Taijiquan also emphasizes the cultivation of qi (氣), or internal energy.

Taijiquan (太極拳) was originally developed for combat in ancient times. Its fighting theory is to use the soft against the hard, and to use the round to neutralize the straight or square. In order to achieve this goal, the body must be soft and the movements must be smooth and natural. Taijiquan also emphasizes the cultivation of qi (氣), or internal energy. The concentrated mind leads the qi to circulate in the body. Because of this, taijiquan can be used for maintaining health and improving longevity.

Because of its effectiveness, since the 1940s, taijiquan has become publicly accepted as one of the best qigong (氣功) practices for health. Unfortunately, due to the overemphasis of its health aspects, the essence of taijiquan's creation—martial applications—has gradually been ignored. It is very upsetting to see that, even in modern China, most taijiquan practitioners do not understand this martial essence of taijiquan. Naturally, they do not understand martial power (jing, 勁) and the theory of using the mind to lead the qi to energize muscular power to its maximum. Consequently, the martial applications of each movement have begun to slowly disappear.

In order to make the art of taijiquan complete, I believe that it is our obligation to again study its martial applications. Only from this study will we be able to recover its lost essence and find the root of its creation. Only then can its health benefits be completely comprehended. In this book, one type of taijiquan martial applications, qin na (擒拿), will be introduced to you. I hope that through this introduction, general taijiquan practitioners will be inspired and encouraged to discuss and find the real essence of their art.

What is Qin Na?

"Qin" (chin) (擒) in Chinese means "to seize or catch," in the way an eagle seizes a rabbit or a policeman "catches a murderer" (qin xiong, 擒兇). "Na" (拿) means "to hold and control." Therefore, qin na can be translated as "seize and control."

Generally speaking, in order to have effective and efficient fighting capability, almost all Chinese martial styles include four categories of techniques. The first category is composed of the techniques of striking, punching, pushing, pressing, etc. The second category is using the leg to kick, sweep, step, or trip. In these techniques, contact time between you and your opponent must be very short, and the power for attacking is usually explosive and harmful. The third category is called wrestling (shuai jiao, 摔跤), and it contains the skills of destroying the opponent's root and balance, consequently throwing him down. Often these techniques are mixed with the leg's sweeping or tripping, and the body's swinging or even throwing. The last category is qin na, containing grabbing techniques that specialize in controlling or locking the opponent's joints, muscles, or tendons.

However, you should understand an important fact. In a combat situation, the above three categories are often applied together, and cannot really be separated. For example, while one of your hands is grabbing and controlling your opponent, the other hand is used to strike a vital cavity. Another example of this is that often you use grabbing to lock your opponent's joints while throwing him down for further attack. Because of this, sometimes it is very difficult to discriminate clearly between techniques in a real situation.

As a matter of fact, many Chinese martial artists believe that since there are many other non-grabbing techniques, such as pressing or striking the cavities or nerves, which can make the opponent numb in part of the body (or even render him unconscious), thereby providing control of the opponent, these techniques should also be recognized as qin na. You can see that, as long as the techniques are able to immobilize an opponent, it does not matter if the cause is a joint lock, numbness, or unconsciousness—all of them can be classified as qin na.

Generally, dividing the muscle/tendon, misplacing the bone, and some techniques of sealing the breath are relatively easy to learn, and the theory behind them is easy to understand. They usually require only muscular strength and practice to make the control effective. When these same techniques are used to break bones or injure joints or tendons, you usually need to use martial power (jing, 勁). (For a discussion of jing, see the author's book Tai Chi Theory and Martial Power, published by YMAA.)

Sealing the vein/artery and pressing the cavities require detailed knowledge of the location and depth of the cavities, the timing of the qi circulation, development of mind (yi, 意), internal energy (qi, 氣), martial power (jing, 勁), and special hand forms and techniques. This usually requires formal instruction by a qualified master, not only because the knowledge is deep, but also because most of the techniques are learned from sensing and feeling. Many of the techniques can easily cause death, and for this reason a master will normally only pass down this knowledge to students who are moral and trustworthy.

(The above excerpt is from Tai Chi Chin Na—The Seizing Art of Tai Chi Chuan by Dr. Yang, Jwing-Ming.)