Four Applications of Taiji Ball Qigong (太極球氣功之應用) | YMAA
Skip to main content
FREE Shipping Order Over $70. (US Only, Conditions apply)    |   Up to 40% Off. Exclusions apply. 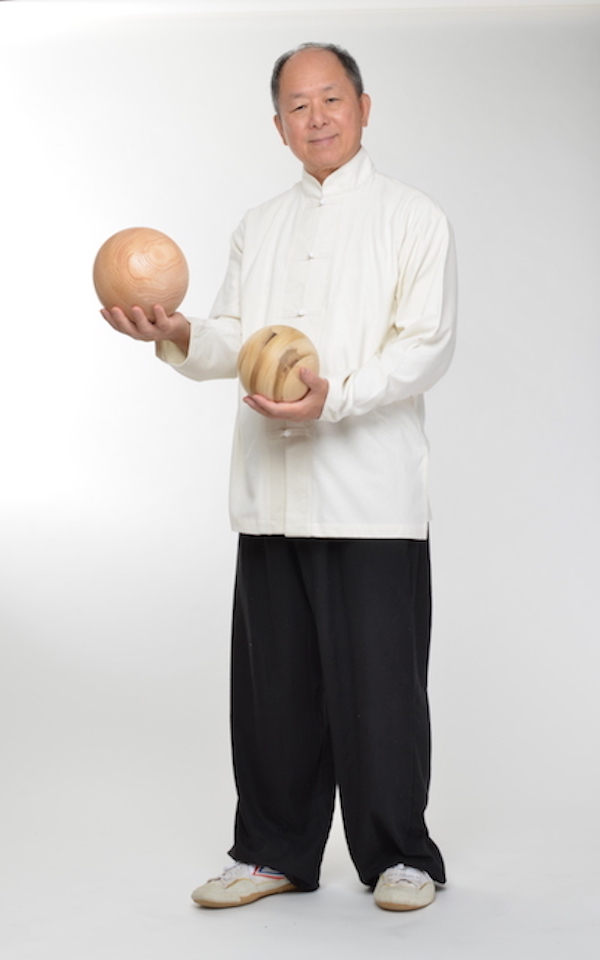 At this stage, you should be able to practice the circling, rotation, and wrap-coiling patterns smoothly. You should also be able to perform each of these patterns comfortably while stationary, rocking, stepping, and bagua stepping.

At this stage, you should be able to practice the circling, rotation, and wrap-coiling patterns smoothly. You should also be able to perform each of these patterns comfortably while stationary, rocking, stepping, and bagua stepping.

Now I will introduce you to some applications of taiji ball. This will include solo exercises of attaching to the ball. Each stage of practice will allow you to focus on further developing your listening jin (ting jin, 聽勁), jin (zhan jin, 沾勁), adhering jin (nian jin, 粘勁), and following jin (sui jin, 隨勁). These are necessary skills. They will assist in the continuous flow of qi as well as refine the sensing skills necessary to become a proficient martial artist.

Before we continue, let's take a brief moment to remind you of a few concepts that you should already know. First, what is jin?. This word is defined in a Chinese dictionary as li-qi (氣力) or qi-li (力氣). We know from our definition that qi is representative of our bio-electricity. Li is known as physically manifested muscular power. Jin therefore is defined as the focused manifestation of muscular power.

Definition can also be derived from the structure of the word jin. This word can be broken down into two words meaning path (巠) and muscular force (力). When interpreted in this manner, jin is defined as directing the muscular power into a precise path. In order to execute this action, the mind must be focused.

The first type we will address is listening jin (ting jin, 聽勁). This jin involves the ability of a person to recognize his opponent's intention both before and after contact has been made. Attaching jin (zhan jin, 沾勁) is defined as one who attaches to the incoming force as it is initiated. Next, there is adhering jin (nian jin, 粘勁), which refers to the individual's ability to remain in contact with his opponent. Finally, following jin (sui jin, 隨勁) is the ability of the person to follow his opponent's actions regardless of direction.

Each of these jins complements each other and for the most part, cannot be separated. For instance, in order to utilize following jin, you must be able to use your listening jin. Following jin also requires you to be able to use your skills in adhering jin, which in turn will occur as you exercise your attaching jin, by using your listening jin. To learn more about jin and the different types of jin, please refer to Taiji Theory, by Master Yang, Jwing-Ming, available from YMAA Publication Center.

First let's explore the advanced solo maneuvering of the ball. You will learn to focus on attaching and adhering to the ball while it is on a table, your forearm, and various surfaces such as bricks, discs, and walls. Each exercise continuously builds upon the last. Eventually you will be able to practice all the patterns collectively in a freestyle manner.

Stand in a ma bu or horse stance to begin. The horse stance is commonly used as a transition between techniques and forms. To assume this stance, first place the feet parallel, slightly wider than your shoulder width. Next, slightly bend the knees and sink your weight into your feet. The torso should be upright, natural, centered, and relaxed. The knees should extend no farther than the tip of your toes. Both feet must remain flat. In order to avoid straining the sides of the knees, the knees must always line up in the direction of the toes

The first exercise is known as returning the ball. You will need a table approximately waist height. The purpose of this exercise is to improve your ability to control the rotation of the ball using your body, and heighten your sensitivity/feeling. Begin your practice of this exercise using small movements and gradually increase the motion.

To start, stand in ma bu and place the ball in front of you on the table under your wrist, palm down. Take a moment to lead the qi to the dan tian with a few deep breaths. Using the twisting action of your waist, move the ball backward and forward along the table in front of you while keeping your palm facing down. Each time the ball is drawn back toward you, the chest will close and you will inhale. As you move the ball forward, exhale and open the chest.

Increase the movement until the ball moves from your fingertips to your elbow. When you are comfortable, rotate your hand so that the palm faces up each time you move the ball forward. Rotating the palm up may also be practiced when moving the ball backward

When you are able to comfortably control the movement of the ball, practice with your eyes closed. Remember the main point of this training is to develop your feeling, or sensing jin.

The next exercise is known as attaching the ball.  Simply put, you are allowing the rotational momentum of the ball to move it across the table into your palm to raise it into the air.  To begin this exercise, place the ball on the table in front of the opposite shoulder of the hand you are using to control.

With palm facing down on top of the ball, begin to inhale and twist the body to draw the ball across the table. Close the chest while the ball continues across the table. As you reach the shoulder of the hand you are using, rotate your palm face up and permit the ball to roll up into the palm of your hand. Finally, raise the ball up off the table while opening the chest and exhaling.  Continue practicing this exercise for each hand until the movements become effortless.

The next exercise you will practice is sideways attaching. To begin this exercise, place the ball on the table in front of the opposite shoulder of the hand moving the ball. Place your hand on top of the ball, inhale, and begin to move the ball across the table. As the ball is moved from one side of the table to the other, keep the palm facing down and allow the ball to roll up over the top of your hand. Next, begin to exhale, twist your body, and move the arm forward while raising the ball off the table. Rotate your palm face up and allow the ball to roll into the palm of your hand.

The next exercise is known as forward-backward attaching. In this situation, you will move the ball from front to back, and then raise it off the table. It can be practiced while standing either in ma bu or while rocking. To practice this while standing in ma bu, you will start with the ball out in front of you on the table. With your palm facing down on the ball, begin to inhale, twist the waist, and draw the ball toward you. Allow the ball to roll over the backside of your hand, and then simultaneously twist your waist, and rotate your hand, palm up, allowing the ball to rest in your palm above the table.

The breathing and chest movement should be as follows: inhale, chest closed while moving the ball backward, and exhale, chest open while raising the ball up off the table. When you practice this exercise while rocking, begin in the most forward position; then rock aft as you draw the ball toward you. Finally, twist the waist while lifting the ball off the table. The breathing and chest movements remain the same. Continue with this exercise until you are able to move the ball across the table and lift it up smoothly.