Marshal Yue, Fei's Ten Important Theses—Part 1 | YMAA
Skip to main content
Free Shipping (US Only, Conditions apply) on orders $75 or more - We are shipping as normally without delays. 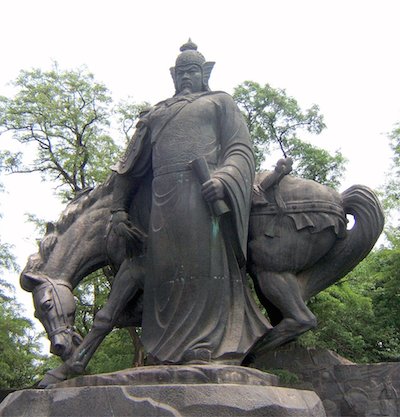 Marshal Yue, Fei's Ten Important Theses on Xingyiquan can be considered the essence or the root of the art. We can clearly see that all of the available documents and books written in the last 60 years derive almost all of their theories and principles from these theses.

Marshal Yue, Fei's Ten Important Theses on Xingyiquan can be considered the essence or the root of the art. We can clearly see that all of the available documents and books written in the last 60 years derive almost all of their theories and principles from these theses.

Like other ancient documents which have been passed down to us, they are very difficult to translate and even harder to write commentary for. We would like to point out a few things. First, many subjects are repeated several times in different theses. Since this document has been passed down through a period of over eight hundred years, these repetitions may have occurred during the process of copying, or they may stem from revisions by past masters.

Second, there are several places in the text that are not clearly expressed. These may be due to copyists' mistakes or mistakes that cropped up during the years of being passed down orally. Most of the people in ancient times could not read, so the secrets had to be passed down orally and memorized.

Third, because of our limited background and knowledge, the commentary may not always explain the text adequately. Also, many sections are open to several explanations, and another experienced master may offer other ideas.

Fourth, it is very difficult to find good English translations for many Chinese words, especially those, which describe or explain spiritual feelings. We will try to explain these in the commentary by using examples. We hope that this will lead you to a feeling for what the words actually mean.

The following is the first of Yue, Fei's thesis.

It can be seen throughout the seven thousand years of Chinese history that the natural course of things is for that which is divided to finally be united, and that which is united to again be divided. However, no matter how many times things change or divide, they all originally came from one root.

This implies that although the events that happen in this world are sometimes random and confused and sometimes unified and clear, there are still only two tendencies: toward Yin and toward Yang. That which is already random (extreme Yang) must be gradually combined (toward Yin), and that which is already unified (extreme Yin) will again gradually be divided and become random. This Yin and Yang theory describes the way things naturally function in this universe. If you can really comprehend this theory, your mind will be clear and you will be able to adjust yourself to fit into this natural cycle.

(If) this theory is applied to the martial arts, it (i.e., the dividing) is also numerous. The important point is (that) the thousands of changes and the ten thousand variations (are) nothing but postures and nothing but Qi. Although the postures cannot be classified, the Qi however is one.

Although there are thousands of techniques ("postures") and variations in the martial arts, their root remains the same. You may divide these postures into Yin and Yang (i.e., attacking and defending, extending and withdrawing, etc.), however, there is only one root within this Yin and Yang, and it is nothing else but Qi. It is the Qi which makes and varies the Yin and Yang. Without this Qi, the Yin and Yang would lose their root. In the martial arts, all of the numerous techniques are nothing but variations of postures and how you move, and all of these come down to how you move your Qi.

About what "one" means, from (your) top to the bottom of the feet, internally there are viscera, bowels, tendons, and bones. Externally, there are muscles, skin, the five sensing organs, and hundreds of skeletons (i.e., bones), mutually combined and become one. When struck will not open, when hit will not decompose. (When) the top wishes to move, the bottom automatically follows. The bottom wishes to move, the top will automatically lead. (When) the top and the bottom move, the center section will attack. (When) the center section moves, the top and the bottom will coordinate. Internal and external are combined, the front and the rear mutually required. This is what is called "threading into one."

In Xingyiquan, the entire body from top to bottom, from front to rear, from inside to outside, is all combined together as one. This is achieved by connecting the Qi throughout the body ("threading into one"). Normally the Qi seems to be disconnected because the mind does not perceive it as being one. The top here means the head, which includes the mind, the center section implies the hands and the waist, and the bottom section indicates the legs. When the Qis in the different parts of your body are threaded into one, then when one place moves, the entire body will follow in coordination. You can see that in the martial arts the primary root of everything is the Qi.

This cannot be reached through force or done (simply) from imitating. When it is time to be calm, it is quiet and transparent. In this position, (you) are steady like a mountain. When it is time to move, like thunder and like (a mountain) collapsing. The speed of emitting (Jin) is like lighting. In addition, when calm, nothing is not calm. The surface and the internal, the top and the bottom, all without disorder and the meaning (i.e., the way) of inhibiting each other (i.e., stagnation). When moving, nothing does not move. The left and the right, the front and the rear, all without pulling (dragging), and the shape of swiftly moving around. It is just like water flowing downward, it is so powerful that nothing is able to stop it. It is like (a cannon is) fired internally, when (it is) shot, (you are) not fast enough to cover your ears. Without considering thinking, without bothering to plan, simply reach the goal without expectation. (When) this (goal) is reached without intention, then isn't it the natural way?

All of the above accomplishments cannot be achieved through force or imitation. You need to really comprehend the meaning of the theory and experience the actual feeling of the postures, and then gradually every posture and movement will become natural and automatic. At this stage, when you are calm you are steady and rooted like a mountain, and when you move your power is like a collapsing mountain and you are as fast as lighting.

When you are calm, your entire body is calm from the inside (mind) to the surface (postures). Once you start to move, there is no stagnation and no confusion. You move as fast and smoothly as water rushing down a hillside, and as powerfully as a cannonball. All of this comes from your natural reactions. You do not have time to think or to anticipate. They are done without plan or expectation.

Because the Qi must be accumulated daily to gain benefit, Gong (i.e., Qigong) is trained for a long time (before) success. In contemplating the way one passes through the holy door, one must wait until one has listened repeatedly and gained sufficient knowledge and has reached the stage where he suddenly comprehends, and has not ignored achieving through thorough training, and then he knows that these things are not (divided into) difficult and easy. The achievement can (only) be reached as an end by itself, (it) cannot be (done) through waiting and (it) cannot be speeded up. Follow the steps and catch the pace, advancing according to the (proper) order. Only then will the organs, skeleton bones, limbs, and joints connect automatically, and the top and bottom, the external and internal not have difficulty communicating. Then those randoms will be gathered and those divided will be unified. The four limbs and hundreds of skeleton bones will all belong to one Qi.

All of the training cannot be done in one day. It takes years of training and accumulating experiences. Only then will you really comprehend the theory and understand the training. Finally, all of the training will become a natural part of you, and only then can all of the random and disconnected parts be threaded together by the one Qi.

(The above is an excerpt from Xingyiquan—Theory, Applications, Fighting Tactics and Spirit by Liang, Shou-Yu and Dr. Yang, Jwing-Ming.) 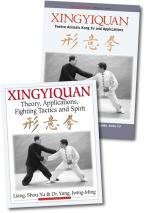