About Pushing Hands—Part 2 | YMAA
Skip to main content
Free Shipping (US Only, Min. $70+ Conditions apply)    |   20% Off Everything, Some Exclusions Apply. 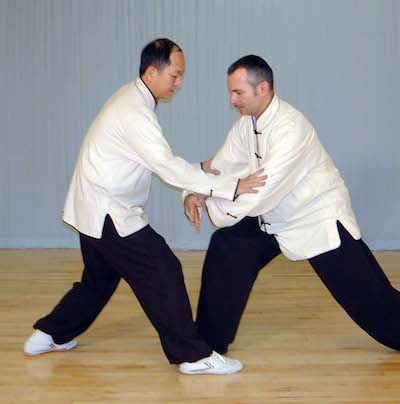 An (Press or Push Down) means to settle the wrist. It is executed by using the base of the palm, either one palm or both palms can press and push. An can be divided into offensive An and defensive An. In offensive An, the base of the palm is used to push upward to the chin to destroy the opponent's central equilibrium; to the throat to seal the opponent's breath; to push forward to Xinkan (Jiuwei) (i.e., solar plexus area) to seal the breath as well as destroy the opponent's central equilibrium or shock his heart; to push downward to the abdominal area to destroy the stability of the lower part of his body or to seal his breath.

This is a Part 2 of "About Pushing Hands" by Dr. Yang, Jwing-Ming. See Part 1 for the beginning of this excerpt.

Àn 按 (Press or Push Down) means to settle the wrist. It is executed by using the base of the palm, either one palm or both palms can press and push. Àn can be divided into offensive Àn and defensive Àn. In offensive Àn, the base of the palm is used to push upward to the chin to destroy the opponent's central equilibrium; to the throat to seal the opponent's breath; to push forward to Xīnkǎn 心坎 (Jiūwěi, 鳩尾) (i.e., solar plexus area) to seal the breath as well as destroy the opponent's central equilibrium or shock his heart; to push downward to the abdominal area to destroy the stability of the lower part of his body or to seal his breath. Defensive Àn is used to seal off the coming Jìng 勁 from the opponent. This is commonly done by pressing-pushing down the opponent's shoulders or elbows, which will cause the opponent to lean forward and will seal off his coming Jìng.

The secret of "Àn 按" that has been passed down by oral tradition is to "settle the wrist" (Zuò Wàn, 坐腕). That means to press the base of the palm forward. Àn Jìng 按勁 can be used either offensively or defensively. When it is used for upward attack, the target can be the chin to upset the opponent's central equilibrium or the throat to seal the breath.

When it is used for forward attack, the target is the solar plexus area (Xīnkǎn 心坎) (Jiūwěi, 鳩尾). Xīnkǎn is a martial name, while Jiūwěi is a Chinese medical name. When this place is attacked, you can seal the opponent's breath or even shock his heart. Naturally, you can also use it to destroy the opponent's central equilibrium. When Àn is used for downward attack, the abdominal area is the main target. When this area is attacked correctly, the muscles can be contracted and will seal the breath.
Àn is also commonly used for defense, allowing you to seal incoming attacks such as Jìng or Àn. When it is applied for this purpose, the shoulders or elbows are pressed downward to hinder the incoming attack.

Cǎi means, to pluck and then take away. Cǎi does not mean to grab. When you grab, you tighten up and the Jìng will be dull and not alive, and can be used by the opponent. If you use Grabbing Jìng, the body must be stiff and the upper body will be tight. When the upper body is tightened, the opponent can take this opportunity (to defeat you). Cǎi means to use the thumb and index finger or middle finger to pluck and pull away. Pluck also means to press the cavities, and pull away means, to destroy the opponent's central equilibrium. Generally speaking, the places for plucking and pulling are shoulders, elbows, and wrists. When it is used for the shoulders, it is used to control the Jiānjǐng 肩井 (GB-21) or Jiānnèilíng 肩內陵 (M-UE-48) cavity. When it is used for the elbows, it is to pluck and press the Qūchí 曲池 (LI-11) and Shàohǎi 少海 (H-3) cavities and then pull downward and sideways. When it is used for the wrists, it is to pluck the Nèiguān 內關 (P-6) cavity and then pull it downward and sideways. If the situation allows, you may use both hands to pluck and press any two places. When you use Cǎi, you must pluck and lead the opponent until he loses his central equilibrium. If you stop midway, the opponent can easily use his Zhǒu 肘 (Elbow) or Kào 靠 (Bump) to counterattack you. Those students must be very careful about this. Additionally, the pluck must be fast. If slow, it can also be used by the opponent.

When you use Cǎi Jìng, you should not grab. If you grab, the arm will be tensed and the body will be stiff. This will provide a good opportunity for your opponent to find your center. When you pluck, normally you use your thumb and index or middle finger. It is common that when you pluck, you press the cavities as well. When cavities are pressed, it can cause numbness and this will prevent the opponent from getting away. Common cavities for this on the shoulder are Jiānjǐng and Jiānnèilíng, on the elbow are Qūchí and Shàohǎi, and on the wrist is Nèiguān.

When you apply Cǎi Jìng in combat, once you have plucked the opponent and begin pulling to destroy his central equilibrium, you must continue your pulling until he has lost balance, otherwise he can use his elbow or shoulder to bump you. In addition, pluck is used in a fast action. If you are slow and your opponent senses your intention, he can easily create an advantageous opportunity for his attack.

Liè means to split both arms in opposite directions and use the front arm to attack diagonally. The two arms are opposite divided and become mutual Yīn (陰) and Yáng (陽). When there is a Yīn and Yáng balance, the central equilibrium can be maintained during attacking. Tàijíquán postures such as Grasp the Sparrow's Tail, Diagonal Flying, and Wild Horse Parts Its Mane contain patterns of Liè Jìng (Splitting Jìng). When you execute Liè Jìng, you must first know Péng Jìng. Without knowing Péng Jìng, the Liè Jìng will be ineffective. Additionally, the central equilibrium can be lost easily. Liè Jìng is often used against the opponent's Zhǒu and Kào Jìngs (i.e. Elbow and Bump Jìngs). When applying Liè Jìng, you must first pluck the opponent's wrist or elbow. If you don't know how to pluck the opponent and apply your Liè Jìng, then your opponent can easily use this opportunity and attack you with his elbow.

Liè means to split. In order to generate a split action, you will need two forces executed in opposite directions. One is used to attack the opponent while the other is used to balance the attacking force. In this case, you can maintain your balance and center. When you use Liè Jìng, you must have Péng Jìng within. Without Péng Jìng, the spine and chest bows will not be able to store the Jìng in the posture. In addition, with Péng Jìng, you can protect your center easily. In order to make Liè Jìng effective and place yourself in a secure position, you must first pluck your opponent's elbow or wrist. If you do not do this, your opponent can easily use his elbow to attack you.

Zhǒu means to use the elbow to neutralize, to attack, or to coil. The neutralization of Zhǒu prevents your elbows from being plucked or squeezed by the opponent. If your elbows are plucked, controlled, sealed, or squeezed, then you must use the Zhǒu Jìng with the coordination of Péng Jìng to neutralize it. The attack of the elbow must be executed in short range fighting (i.e. small circle). To execute Zhǒu Jìng, you must have entered the central door or have occupied the opponent's empty door, so Zhǒu Jìng can be used. If you have already plucked the opponent's wrist, you can use your elbow to press his elbow upward to control his arm. When you execute your Zhǒu Jìng, you must be very cautious to guard yourself against the opponent's Lǚ Jìng (i.e., Rollback Jìng). If your opponent is good at using Lǚ Jìng, he can pull your root and destroy your central equilibrium. Therefore, you must be very careful to prevent this from happening.

The skill of Zhǒu Jìng can be used for neutralization, stroke, or even to coil the opponent's arm for control. When it is used for neutralization, it is commonly used to prevent your opponent from plucking, controlling, sealing, or squeezing your elbows. Through circling your elbows with Péng Jìng, you will be able to re-direct the opponent's force and neutralize it. This will prevent him from locating your center and destroying it. When you and your opponent are in a short range-fighting situation, if the opportunity allows, you should use your elbow to strike the opponent's vital areas. When you execute your strikes, you must have already taken an advantageous position, such as occupying the central door or entering his empty door. If you have not placed him into this urgent position, he can easily counter you by controlling your shoulder or elbow and destroying your balance. The elbow can also be used in Qín Ná techniques. For example, if you have grabbed your opponent's wrist with one hand, you can use the elbow of the other arm to coil his elbow and lock him up. When you apply Elbow (Zhǒu, 肘), you must be alert to prevent your opponent from using Lǚ Jìng (i.e., Rollback Jìng) to counter.

Kào means to use part of your own body to bump the opponent's body to make him lose his central equilibrium. Kào Jìng can be divided into shoulder Kào, chest Kào, back Kào, hip Kào, and knee Kào, etc. Kào Jìng is the same as Zhǒu Jìng, which must be applied when the opponent is near. Therefore, the skills of how to occupy the central door and enter the empty door must be expert and alive; you can then create an advantageous opportunity and establish a desirable position. As with Zhǒu Jìng, when you apply Kào Jìng, you must be cautious to guard yourself against the opponent's Lǚ Jìng. If the opponent is good at using Lǚ Jìng, he can pull your root and destroy your central equilibrium. Therefore, you must be careful to prevent this from happening.

Kào and Zhǒu Jìngs specialize in short range-fighting situations. To apply Kào, you may use any part of your body to bump your opponent out of balance. For example, you may use your shoulders, chest, back, hips, knees, etc. to bump your opponent off. Since Kào is a short range fighting technique, you must already have an advantageous position when you use it to avoid your opponent's attack. Only when your opponent is in an urgent situation can you get closer to his body without taking too much of a risk. If you are interested in knowing more about these Tàijíquán eight basic Jìng patterns, please refer to the books: Taiji Chin Na or Taijiquan-Classical Yang Style by YMAA.

(The above is an excerpt from Taijiquan Theory of Dr. Yang, Jwing-Ming, The Root of Taijiquan)