One World, One Breath: An Interview with Bill Douglas, founder of World Tai Chi Day & Qigong Day—Part 1 | YMAA
Skip to main content
FREE Shipping Order Over $70. (US Only, Conditions apply)    |   Up to 40% Off. Exclusions apply. 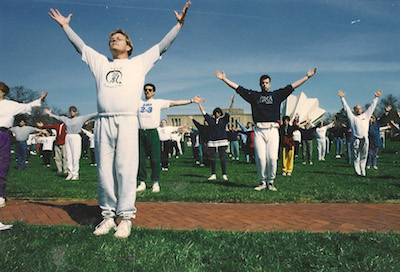 World Tai Chi & Qigong Day (WTCQD) will be celebrated on April 25, 2015 at 10 a.m. in every time zone around the world. You can participate in this global day of peace by yourself or with your local tai chi group by simply practicing at 10 a.m. As the day passes, a wave of energy will encircle the globe through the hearts and minds of practitioners on every continent.

World Tai Chi & Qigong Day (WTCQD) will be celebrated on April 25, 2015 at 10 a.m. in every time zone around the world. You can participate in this global day of peace by yourself or with your local tai chi group by simply practicing at 10 a.m. As the day passes, a wave of energy will encircle the globe through the hearts and minds of practitioners on every continent.

"2015 is the 17th anniversary of the event, which began in 1998. That year, I was living in Kansas City, Mo. and happened to walk past the very first WTCQD event," said David Silver. "I had been reading about qigong for a few years and knew what tai chi was, but I was shocked to see this group of tai chi players peacefully moving in unison on the lawn of my local art museum! In those days, it was rare to see tai chi or qigong anywhere outside of Chinatown. That experience influenced me to make the internal arts a part of my life, and 17 years later I am a teacher myself, and my 'day job' is publishing instructional tai chi and qigong books and videos. One thing truly leads to another."

Bill Douglas is the creator of World Tai Chi & Qigong Day.  After 17 years, the event has grown to include millions of tai chi and qigong practitioners who share a common vision of hope and healing. Most likely, there is an event scheduled in a park, school, or community center near you.

I spoke with Bill Douglas recently and asked him to share his experience and insight about tai chi and his amazing global event.

What inspired you to create World Tai Chi & Qigong Day?

I was inspired by my mom's death to create this day and to help others.
My mom died several years ago during an angioplasty operation. Being a tai chi and qigong meditation teacher, I tried to interest my parents in practicing tai chi for their health. But they said it was "too weird."  Both died of stress/heart disease.

After Mom's death, I found a note from her, that she wrote the night before her passing.  It read, "I wish I could go back a few years and learn the arts of relaxation Jr. tried to teach me. I so would have loved to see my grandchildren grow up."  Needless to say this had a profound effect upon me.  I wanted tai chi to be so widespread that nobody could think of it as "weird."

So my wife, Angela Wong Douglas, and I decided to create a visual spectacle that the media could NOT ignore. We organized two hundred tai chi enthusiasts to spread out across the magnificent lawn of the Nelson Atkins Museum of Art, Kansas City, Mo. and hold a mass tai chi exhibition. The media LOVED IT. CNN picked it up, and World Tai Chi Day was born. Dr. Roger Jahnke of the National Qigong Association contacted us, and suggested, "Hey, why not make it World Tai Chi & Qigong Day. We don't all do tai chi." Made sense to us, so it became World Tai Chi & Qigong Day.

The idea captured the world's imagination and it began to grow faster than we could keep up with supporting it. It was a whirlwind.

What originally drove me to tai chi and qigong was that I suffered from war related post-traumatic stress disorder (PTSD). I wasn't in combat, at least not in a military role, but I grew up in a PTSD household. My father suffered three years of front line combat. When I married Angie and had my own children, the PTSD began to rear its ugly head and I reacted to life inappropriately. This drove me to begin my journey through the door of a tai chi class, and today over thirty years later I am still walking the path to untangle my past, to find peace, and to evolve into something newer, clearer, more loving, and more powerful than the troubled young man I had been after living in the shadow of the most barbaric experience a human can endure—the pain of war.

Today, Angie and I have studied tai chi and qigong meditation for over thirty years with teachers worldwide. My wife and I are both authors of a best-selling tai chi book, The Complete Idiot's Guide to T'ai Chi & Qigong.  We were the 2009 Inductees to the Internal Arts Hall of Fame in New York, and received top honors from the National Qigong Association, the World Congress on Qigong, and received the "Lou Gehrig Hero Award" for teaching tai chi to Amyotrophic Lateral Sclerosis/ALS professionals.

How do you describe the difference between tai chi and qigong?

To me, tai chi is one of the most profound jewels among the 6,000 forms of qigong in the Chinese Book of Medicine. Tai chi at its highest level is a mindfulness meditative experience that not only loosens the body, but also the mind and heart, enabling us to become more open-minded and open hearted. It makes us more flexible in body and mind, and is a powerful tool to the modern human who is continually being battered by constant unrelenting change in this time in human history. I remind my students, "We don't do tai chi and qigong to be better at tai chi and qigong. We do these practices to become better at EVERYTHING!" These tools designed to loosen the body, go deeper, loosening the heart and mind and thereby fostering our ability to become evolutionary beings, able to surf the tides of the changing world in ways that nurture us and everyone we touch.

How have you spread the benefits of tai chi? Qigong?

Angela and I have been pioneers integrating tai chi and qigong into modern healthcare with most of the largest health networks and institutions in the Kansas City metro.  I am proud to say that our work has become a model for the world.
Angela and I currently teach "Tai Chi Meditation" for the University of Kansas Hospital's Turning Point program and also at the Kansas University Medical Center.  We offer tai chi for people dealing with heart disease, multiple sclerosis (MS), fibromyalgia, Parkinson's disease and many chronic illnesses.

What benefits do people who attend WTCQD derive from participating?

On that day, many people worldwide talk about the beautiful sensations they experience being part of a global wave of qi. I have to admit that I too feel "something different." It feels bigger, silkier, and more profound. It's hard to describe, but anyone whose done tai chi for decades knows that there is something to "group energy" and how it feels. This is why tai chi participants in China most often do it in groups. It "feels" different.

But also those who are not yet tai chi or qigong participants get a chance to be introduced to the arts, and to local schools and teachers.  WTCQD opens gates that can change lives. For example, Linda Bowers was a young woman who was severely injured when hit by a passing car. Her recovery was a struggle. Her mom saw me on television being interviewed at 7 a.m. about our WTCQD event in Kansas City, Mo. It prompted her mom to push her out the door, into the car, and to our event at 10 a.m. that same morning. Linda loved it! She eventually became a tai chi teacher and taught tai chi to women at the Kansas State Correctional Institution. One day she invited me to come to the prison to present two of her students with teaching certificates. She trained them as tai chi teachers who helped teach other inmates. WTCQD may have profoundly altered the lives of these women forever.

That is just one example. We have seen our students reduce or eliminate the need for type 2 diabetes medications, hypertension medication, avoid surgery, and much more. We know this is happening on a global scale as we share all we've done locally with teachers, groups, organizations and health professionals and government health agencies worldwide. In our local classes, for example, we had a surgeon and a pharmacology professor in our classes whose chronic pain issues went away along with their hypertension. They "forced" their general practitioner to write them a prescription for tai chi for their hypertension so they could attempt to get their insurance to cover it.

WTCQD introduces millions worldwide to tai chi and qigong to medical research, and to local groups and teachers via our global media work via our website directories.

Do you feel that the tide has turned? Is tai chi still "weird"?

We've found that things are popping in a way that's much more effortless this year. There are endless links online about the event that just goes on and on.
We just heard about major events taking place in Germany, in almost every major city. And, a woman in Pakistan sent photos of an event she organized with thousands of kids, where she brought grandmasters from China to teach them. How it will enfold in those kids' lives over the years is just beyond imagination.
Looking back, I see that the creation of WTCQD is like the biggest tai chi exercise in itself. We've learned how to respond to the energy in the world, when to push and when to relax and allow it to grow naturally.  No, it isn't "weird."

Bill Douglas is an author, martial artist, and teacher. He along with his wife, Angela, are the creators of World Tai Chi & Qigong Day.  Bill and Angela reside in the Kansas City metro area. Bill Douglas was the 2009 Inductee to the Internal Arts Hall of Fame in New York. He is the author of a best-selling Tai Chi book, The Complete Idiot's Guide to T'ai Chi & Qigong (Penguin/Random Alpha Books, 4th edition), and the Tai Chi Expert for best selling naturopathic author Dr. Andrew Weil's websites. Bill received the Extraordinary Service in the Field of Qigong by the National Qigong Association, and the Media Excellence Award in Qigong from the World Congress on Qigong, and the Leadership Award from the National Tai Chi Chuan Association. Bill has been a Tai Chi source for the New York Times, Wall Street Journal, Reader's Digest, China's Xinhua News Agency, the South China Morning Post, Prevention Magazine, WebMD, and media worldwide. Bill currently runs the Tai Chi and Qigong Meditation program through the University of Kansas Hospital's Turning Point, and KU Medical Center's Landon Center on the Aging, and has presented for hospitals and institutions all over America, as well as for some of the world's largest corporations employee and executive staffs. A local PBS affiliate recently reported on patients in Bill's Tai Chi and Qigong hospital programs avoiding surgery, reducing the need for medications, and seeing profound life and health benefits.