Power Training for Tai Chi Sword | YMAA
Skip to main content
FREE Shipping Order Over $70. (US Only, Conditions apply)    |   Up to 40% Off. Exclusions apply. 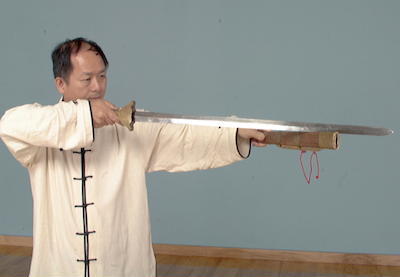 According to Chinese martial Qigong, the power is ﬁrst generated from the mind. From the mind, the Qi is led to the physical body to manifest it as power. Therefore, we can see that the Qi is the energy, while the physical body is like the machine. A detailed explanation of Qigong can be found in the YMAA book The Essence of Shaolin White Crane.

According to Chinese martial Qigong, the power is ﬁrst generated from the mind. From the mind, the Qi is led to the physical body to manifest it as power. Therefore, we can see that the Qi is the energy, while the physical body is like the machine. A detailed explanation of Qigong can be found in the YMAA book The Essence of Shaolin White Crane.

Furthermore, according to a 1996 article in The New York Times, "Complex and Hidden Brain in the Gut Makes Stomachaches and Butterflies," by Sandra Blakeslee, a human being can be thought of as having two brains. One brain is in the head, and the other is in the gut (i.e., digestive system). Though these two brains are separated physically, through the connection of the spinal cord (highly electrically conductive tissue) (i.e., Chinese Thrusting Vessel, they actually function as one.

In this article, it is explained that the upper brain is able to think and has memory (i.e., is able to store data, utilizing electrochemical charges), while the lower brain has memory, but does not have the capability of thought. This discovery offers conﬁrmation of the Chinese belief that the Real Dan Tian (i.e., Large and Small Intestines) is able to store Qi (i.e., charges), while the Upper Dan Tian governs thinking and directs the Qi.

Theoretically speaking, if the upper brain is able to think, then it should be able to generate an EMF (electromotive force) while the lower brain should have a large capacity for storing charges. In other words, the lower brain could be the human battery in which the life force resides. Once the brain has generated an idea (EMF), the charges will immediately be directed from the lower brain, through the spinal cord and nervous system, to the desired area in order to activate the physical body for function.

According to Ohm's Law in Physics, ΔV = iR where ΔV is potential difference or EMF, i is current, and R is resistance.

From this formula, we can see that if R is a constant, then the higher the potential or EMF, the stronger the current that is generated will be. If we assume that the resistance of our body remains constant, then the more we concentrate (i.e., higher EMF), the stronger the Qi ﬂow will be. This parallels the Chinese Qigong concept that the more you concentrate, the higher your energy level. From Chinese Qigong, higher levels of concentration can be trained through still meditation.

We can also examine the formula for physical power manifestation:  Power = ΔVi = i2R This means that the power generated depends on the current and the resistance. Generally, when we intend to manifest our physical strength, for example, when pushing a car, we naturally tense our physical body. Whenever the body is tensed, the resistance of the body is higher, and the energy (current) is trapped in the muscles and power can be manifested. It is the same in many of the external martial styles (or hard styles), such as Tiger and Eagle styles, which focus on building up the muscles (i.e., strong machine) and the tension (i.e., resistance) to manifest power to its highest levels.

However, the concepts and the approaches of the internal styles (or soft styles), such as Taijiquan and Liu He Ba Fa, are quite different. They teach that, since current is the energy of manifestation, and its inﬂuence on the power can be much more signiﬁcant (remember current is squared in the formula), then they should pay more attention to cultivating a stronger ﬂow of Qi. In order to have stronger Qi circulation, meditation is vital, since it generates EMF for moving the current. However, in order to have smooth Qi circulation, physical resistance or tension must be at a minimum. Therefore, physical relaxation is the key to the internal styles.

Leading Qi Throughout the Body

The best and most focused manifestation of power, which can be generated, should come from both energy and ﬂesh—the current and the resistance from the above example. Sacriﬁce either one, and power manifestation is reduced. Therefore, some soft-hard martial styles, such as White Crane and Xingyiquan, emphasize both Qi (current) and tension (i.e., resistance). The way they do so is by ﬁrst keeping the body as relaxed as possible, while using the concentrated mind to lead the Qi to the physical body, such as the arms or legs. Once the Qi is led from the Lower Dan Tian to the limbs (i.e., right before impact), the physical body will suddenly tense up. Therefore, these styles are called soft-hard styles, and emphasize both internal and external manifestations of power.

When these cavities are struck with fast and focused power, the internal organs can be shocked. The results can be fatal. This is why it is said that internal styles are more penetrating. It is very difﬁcult to accurately strike the vital cavities at the proper depth. This is why internal martial arts are considered to be the highest form of martial arts in Chinese society. It is also the reason that, when a master from an external style has reached a high level, he/she will gradually train to become a soft-hard stylist, and ﬁnally will endeavor to become completely soft. In fact, when many masters have reached this stage, they have already become old, and have lost most of their physical strength. In order to survive, changing from hard to soft is almost necessary. If you wish to know more about martial Qigong training, and the different types of martial power, please refer to the books: The Essence of Shaolin White Crane and Tai Chi Theory and Power, available from YMAA Publication Center.

From the above discussion, you can see that in order to have strong power manifestation, you need to develop both your physical body and your Qi body. Physical strength provides an efﬁcient and strong machine, while an abundant Qi supply provides a pure and powerful energy supply for the machine. Only if you have both can your power be stronger. You will also grow and stay healthy, and your spirit can become uplifted.

Some of the physical practices, which can strengthen muscles and tendons for sword performance, are as follows:

Muscular power is developed by strengthening the ﬁngers, the grip, and the arms. The ﬁngers are strengthened by doing push-ups on the ﬁnger tips. Work up to twenty repetitions. Holding the push-up position as long as possible, working up to one to three minutes, develops endurance.

Working with bundles of bamboo rods and a training partner strengthens the grip. Both people turn and raise the bundle in opposite directions. Take turns, one person holding the bundle tightly, the other somewhat loosely, and repeat 50 times. This conditions the palms and helps to strengthen the ﬁngers.

This exercise is done using a ﬁve to ten-pound weight suspended with a cord from the center of a short wooden bar. Stand with the feet well apart and hold the bar straight out at shoulder level. Wind the cord onto the bar; thereby lifting the weight as far as it will go. Slowly lower the weight by unwinding the cord, continue winding the cord to lift the weight again, then lower it to the ﬂoor. This set should be performed with the hands held palm down, and with the hands held palm up. Practice winding the weight up and down in both directions at least 10 times. Increase the weight, as you are able.

These three exercises are done using a thick, three-foot dowel with a ﬁve to ten-pound weight suspended from one end. Stand with the feet well apart and hold the stick like a sword. First move the tip from side to side without letting the weight change position, and keeping the handle from moving as well. This trains the arm for repelling and covering. Next move the handle end from side to side, while keeping the weight and tip of the stick stationary. This trains the arm for sliding and blocking. Finally keep the tip of the stick and the weight stationary and move the hand in a three-foot circle both clockwise and counterclockwise. This develops strength and suppleness in the arm. Although these are muscle-training exercises, if the student concentrates, he/she can generate internal energy as well.

You can devise your own methods for learning to cut and thrust accurately. An example of a way to practice cutting is to mount two dowels with a narrow space between them. Practice sliding the tip of the sword between the dowels without touching them. The width of the space between them can be varied, and tape can be used to limit the length of the slit as well, in order to practice cutting to a particular depth, or to practice using the very tip of the sword. Stabbing can be practiced by suspending a small object on a long cord and stabbing it; trying to hit it as it swings about.

When you practice the sticking and coiling training, you should use a staff or a soft branch, since it is easier to feel the contact of your sword against a staff or branch. When you train, simply use the third of the blade nearest the sword tip to coil around the staff or branch, without losing contact. You should practice coiling in both directions until you feel comfortable and natural. The motion of coiling must originate from the body, instead of the arms.

(The above excerpt is from Taiji Sword, Classical Yang Style, by Dr. Yang, Jwing-Ming.)