The Sword Structure | YMAA
Skip to main content
FREE Shipping Order Over $70. (US Only, Conditions apply)    |   Up to 40% Off. Exclusions apply. 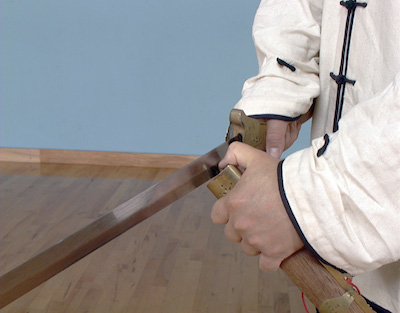 The sword consists of two parts: the blade and the hilt or handle. Both edges of the narrow-blade sword are sharp; the handle and sword body are always straight. The hand guard is always flat and perpendicular to the blade, rather than circular or oval.

Usually, the sword is one continuous piece of metal, and the hand guard and handle are slipped onto the butt end (the tang) and held in place with a knot-shaped nut or with a pin or rivet.

On well-made swords, there may also be brass pegs going through the handle and the tang itself. The blade or sword body is sharpened on both edges, and the tip is either rounded or sharply pointed as described below. Swords are from 20 inches to 50 inches long and less than 1.5 inches in width. 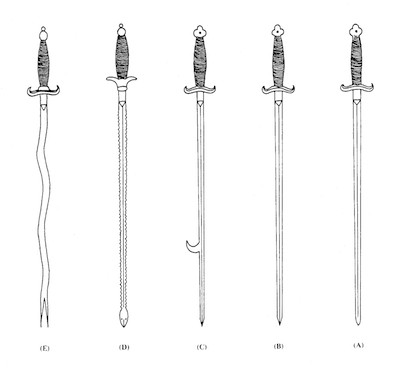 Although there are numerous kinds of swords, only five will be described here. Among these, the first two (A and B) are the most common sword types and are the designs used most often by today's practitioners. The other three types are specialized modifications  of the first two. Although they can be used with most common sword techniques, there are additional special techniques made possible by their design.

A.  Scholar's Sword (Wen Jian, 文劍). This sword is also called a female sword. It is long and light, with a rounded tip. It is not commonly used for war, but for self-defense and for dancing. It was also commonly carried by scholars to present an elegant appearance or was hung on a wall to decorate a room.

B. Martial Sword (Wu Jian, 武劍). This sword, also known as a male sword, is long and heavy, with a pointed tip. Be- cause of its killing potential, it was mainly used in battle.

C.  Wu Hooked Sword (Wu Gou Jian, 吳鉤劍). This sword was invented during the Wu dynasty (吳朝) (AD 222–280) and is designed for cutting an enemy's limbs, or his horse's legs, after blocking a weapon.

D. Saw Toothed Sword (Ju Chi Jian, 鋸齒劍). This sword has a serrated edge to give it greater cutting ability. The edge design probably originated when someone found that a badly nicked blade seemed to cut more viciously. The two holes in the tip of the sword resemble the eyes of a snake and make a whooshing noise when the sword is swung.

E.  Snake Tongue Sword (She She Jian, 蛇舌劍). This sword has a wavy blade, which again makes for a fearful cut. The double point may have given the fighter a way to catch his opponent's weapon at long range.

The Blood Groove (Xue Gou, 血溝). When a sword fighter stabs his enemy, the blade is fixed in the enemy's body by the body's attempt to close the wound. It creates a suction effect on the blade. These factors make it difficult to withdraw the weapon. To solve this problem, most martial swords (wu jian, 武劍) were forged with a groove down each side of the blade, called a blood groove. In battle, the warrior is faced with a multitude of enemies, so he must be able to get the blade free as quickly as possible. Without the blood groove, freeing the embedded sword would require the swordsman to either widen the wound by twisting the blade or thrust the sword completely through the body to break the suction.

The Tassel (Jian Sui, 劍繐). Many swords in use today have a tassel hanging from the hilt to enhance its appearance. Generally, this tassel has no martial usefulness for the jian. However, there are some swords with long tassels (chang sui jian, 長繐劍), where the tassel is designed to attack the opponent's eyes.

Historically, the scholar's sword, the dancing sword, and the decorative sword usually had a tassel, and the martial sword almost never did. The reasons for not using a tassel are as follows: first, the tassel changes the balance of the sword, making it harder to handle; second, it can become entangled in the sword arm, distracting the sword fighter; third, the opponent can grab the tassel and gain control of the sword.

The Sheath (Jian Qiao, 劍鞘). There are two types of scabbards: the scholar sheath and the martial sheath. The scholar sheath is made of wood, covered with snake or alligator skin to make it waterproof and to protect the sword from moisture. The martial sheath is made of metal to enable it to withstand more abuse; in addition, the metal sheath can be used for blocking. Sheaths should be straight and stiff, and the brackets for the hanger must be tight and not slide up and down the sheath.

Sword Structure and Technique in Relation to Geography

The swords used today are almost all based on Qing dynasty designs, so only these kinds of swords will be described here.

Northern Chinese tend to be taller than Southerners, and there are cultural differences as well, which have resulted in North/South distinctions in both the structure and techniques of the sword.

Northern characteristics of the sword

Southern characteristics of the sword

The taiji sword is generally longer than other Northern swords. The length of the taiji sword selected depends upon the individual. The length should match your height from the feet to the base of the sternum.

(The above expert is from Tai Chi Sword Classical Yang Style: The Complete Form, Qigong and Applications by Dr. Yang, Jwing-Ming.) 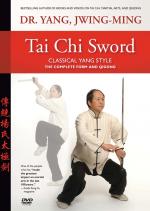