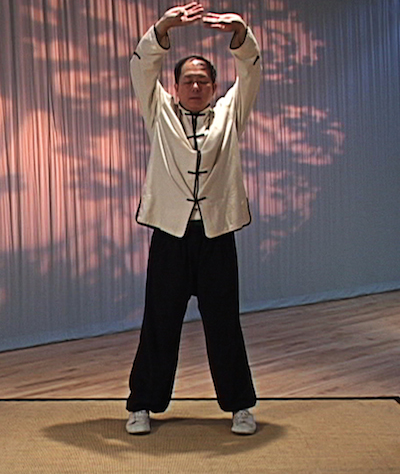 Qi Generation and Transportation in Taijiquan

Taijiquan is a style of martial qigong training, so naturally qi is extremely important. In Chinese martial society there is a saying: "Train muscles, bones, and skin externally, and train qi internally" (wai lian jing gu pi, nei lian yi kou qi, 外練筋骨皮，內練一口氣). However, this raises the question, How do I generate qi and how do I experience it?

Qi in taijiquan is generated both externally and internally. It is recommended that you do certain exercises, in addition to the sequence, which will help you to understand and develop qi.

An exercise called arcing the arms (gong sho, 拱手) is commonly used to help beginners generate qi in the shoulders and back.  Stand in the false stance with one leg rooted on the ground and the other in front of it with only the toes touching the ground.

When you stand in this posture for about three minutes, your arms and one side of your back should feel sore and warm. Because the arms are held extended, the muscles and nerves are stressed and tense. Qi will build up in this area and heat will be generated. Also, because one leg carries all the weight, the muscles and nerves in that leg and in one side of the back will be tense and will thereby generate qi. Because this qi is generated in the shoulders and legs rather than in the dan tian, it is considered "local qi."

In order to keep the qi generation and the flow in the back balanced, after three minutes change your legs without moving the arms and stand this way for another three minutes. After the six minutes, put both feet flat on the floor, shoulder width apart, and lower your arms slowly. The withheld qi will then flow out naturally and strongly. It is just like a dam that, after accumulating a large amount of water, releases it and lets it flow out. At this time, concentrate and calm the mind and look for the feeling of qi flowing from the shoulders to the palms and fingertips. Beginners can usually sense this qi flow, which is typically felt as warmth or a slight numbness.

Sometimes qi is felt on the upper lip. This is because there is a channel (hand yangming large intestine) that runs over the top of the shoulder to the upper lip. However, the feeling is usually stronger in the palms and fingers than in the lip because there are six qi channels that pass through the shoulder to end in the hand, but there is only one channel connecting the lip and shoulder. Once you experience qi flowing in your arms and shoulders during this exercise, you should also find that you can sense it in your back.

After you have developed your qi circulation, you should practice directing it into both arms as you exhale. The energy goes out each arm, exchanges at the fingertips, and comes in through the opposite arm as you inhale, circling in both directions simultaneously. Because the arms and hands form a circle, the qi is always flowing from each hand into the other and back to the body. Since the energy is withheld or conserved within the body, the gong shou posture is considered yin. In addition to increasing the circulation of qi in the arms and shoulders, the gong shou exercise will also improve the flow in the spine, which is particularly important in taijiquan.

This exercise is one of the most common practices for leading the beginner to experience the flow of qi, and some taiji styles place great emphasis on it. If a taiji practitioner does not know and experience the feeling of qi flow, how can he really understand qi?

How to Find Qi Exercises

Another common exercise is called supporting the heavens (tuo tian, 托天). This exercise has been discussed in the author's book Tai Chi Qigong, and will not be repeated here. There are many other exercises used to teach beginners about qi. The reader should consult different taiji and qigong books for further ideas.

After you understand what you are looking for, there are two basic sets of exercises you should practice. These exercises increase the generation of qi, balance it, and train the coordination of breath with movement and the transporting of qi. The mind is all-important, and the beginner will find visualizations extremely helpful. For the beginner, the generation and transporting of qi come from the concentrated imagining that you are pushing a heavy object with relaxed muscles. At first, most beginners will not feel the energy flow, but with time and practice most will start feeling warmth in the palms. It is important also to keep the yi (mind, attention, intention) further than the qi. You know that when you walk, you must keep your yi ahead of you, rather than on your feet, or else you won't be able to take the first step. Similarly, when you want to transport qi, you must keep your yi ahead of where the qi is in order to move it.

The primary set of these exercises trains the coordination of qi and breath, balances energy, and opens up the qi channels in the arms and legs. The set consists in standing stationary and moving the arms in simple movements—up and down, in and out—in coordination with the breathing. This set has been mentioned in the author's book Tai Chi Chuan Classical Yang Style and will not be repeated here.

After you have practiced this set for a while and can move qi to your limbs, you can start the second set, which coils the qi throughout your body and out to the skin. In these exercises, your muscles are tensed by the twisting of your limbs and body, and then relaxed. The qi that is generated in these tensed areas is led by the mind to coil out to the extremities and spiral out to the skin. This coiling motion helps to increase the penetration of your jing and brings the qi out to the skin, opening all the little qi branches (luo, 絡).

This practice slows degeneration and increases the efficiency of your muscles. This is what is meant by the saying, "Transport qi as though through a pearl with a 'nine-curved hole,' not even the tiniest place won't be reached." In pushing hands and in fighting, victory is frequently decided by who has the greatest skill in what is called "listening." When qi is circulating smoothly to your skin, you will be able to sense or "listen" to your enemy's power and intention. Also, after many years of qi development, you may be able to pass your qi into another person's body through the cavities on his qi channels in order to injure or heal.

Once you have accomplished grand circulation, you can use these exercises to circulate energy from the dan tian out to the extremities, instead of just using local energy.

Before starting this exercise, calm down and meditate for a minute. The tongue should be touching the roof of the mouth, and the entire body should remain relaxed throughout the exercises. The thumbs and little fingers should be pulled back slightly to direct the qi to the palms. In order to build the qi to a high level, repeat each form ten to twenty times, and then go on to the next form without stopping.

In these exercises, inhale as you bring your hands toward your shoulders, and exhale as you move your hands away from your shoulders. As in all of taiji, the arms are never extended fully—you should always maintain a slight bend in the elbow. As you inhale, imagine that you are drawing energy in through your hands and feet, and condensing it in your dan tian and spine. As you exhale, move the qi from your dan tian and spine out through your hands and feet. When you exhale, you should notice six flows of qi: two out of the palms (laogong, P-8, 勞宮), two out of the feet (yongquan, K-1, 湧泉), one from the dan tian down to the place between the anus and groin (huiyin, Co-1, 會陰), and one from the dan tian through the spinal cord to the crown of the head (baihui, Gv-20, 百會).

As always, imagine that you are moving against resistance, and that your feet are pushing against the floor.

The above is an excerpt from Tai Chi Chuan Martial Power Advanced Yang Style by Dr. Yang, Jwing-Ming.