Some Movements for Tai Chi Ball Practice | YMAA
Skip to main content
FREE Shipping Order Over $70. (US Only, Conditions apply)    |   Up to 40% Off. Exclusions apply. 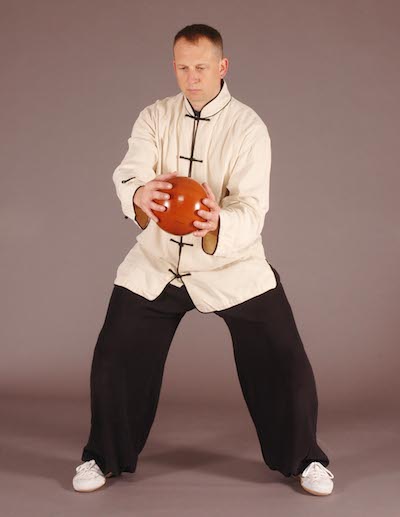 The following are some movements that you may find helpful while practicing tai chi ball.  It is best to do each exercise for 12 repetitions. 1. Stationary (Ding Bu. To begin this exercise, stand in ma bu and start the stationary horizontal circling pattern using a yang pattern. Once you have increased the size of the circle to your maximum range of motion, repeat the pattern for a few repetitions.

The following are some movements that you may find helpful while practicing tai chi ball.  It is best to do each exercise for 12 repetitions.

To begin this exercise, stand in ma bu and start the stationary horizontal circling pattern using a yang pattern. Once you have increased the size of the circle to your maximum range of motion, repeat the pattern for a few repetitions. Now to exchange from yang to yin, allow the ball to move out to the far left-hand side of your circle. As the ball continues on its path, start to draw it into your body. This time the ball will follow a horizontal 'S' shape while it passes through the center of the circle. Once it has reached the center of the circle, or wuji point, you will redirect the ball to its yin path

Allow the ball to continue its yin pattern for a few repetitions before you redirect it back to the yang pattern. Using the same method as before, allow the ball to reach the far right-hand side of its circle, and then redirect its path through the center of the circle and back into the yang pattern. Continue to practice this exercise, changing your movements from yin to yang and back again until you are comfortable exchanging smoothly, without interruption, and then reduce your circling pattern back to your original starting point.

The next stage is to combine the yin-yang exchange with rocking. The exchange while rocking to one side is the same as you have done while stationary. Simply pass through the center of your circle. We will only describe the yin-yang exchange, which combines your rocking action with changing the direction you are facing while executing the horizontal circling pattern. This will follow the same rules you employed in the vertical yin-yang exchanging pattern. Once again, you will become the wuji point as you turn your body from one side to the other.

Begin with the horizontal clockwise circling pattern with the rocking motion. Increase the diameter of the circling pattern until you have reached your maximum range of motion. To change your direction, begin with your body and the ball in the most forward position. Pushing off the forward foot, pull the ball toward your body just as you did in the horizontal circling pattern previously described. With the ball moving toward you, shift your weight back while simultaneously turning your forward foot in toward you. Twist your waist in the opposite direction while turning the opposite foot out.

The ball should maintain its path across your dan tian. Continuing with this movement, you will end up in a si liu bu stance, facing the opposite direction, and the ball will be moving on its outbound path. From this position, begin to rock forward and continue with your new horizontal circling counterclockwise pattern. Repeat this circling pattern for a few repetitions; then practice changing the direction of the pattern back to the original side.

The next step is to practice the yin-yang exchange while stepping back and forth in a linear direction. Begin in si liu bu and begin your normal horizontal circling pattern in a clockwise direction. Continue until you have reached your maximum range of motion. Now begin to step forward and backward, and practice the exchange while using the two methods of stepping we have described in the stepping section of horizontal circling.

Continue to step forward and backward using both methods of stepping until you are able to execute the exchanges smoothly. The next stage of this exercise is to perform the exchange while using the balance method of stepping. This exchange is done the same as the vertical one, only on a horizontal path. You may choose to exchange either while the ball is traveling aft or while it is traveling forward. Practice this method until the exchanges are smooth. When you are finished, reduce your circling pattern back to your dan tian and step into ma bu for closure.

The final stage of horizontal exchanging is to perform it while stepping in a bagua pattern. Step into si liu bu, left leg forward. Twist your body to the right until you are facing the center of the circle you are about to walk. Initiate your normal horizontal circling in a clockwise direction while rocking until you have reached your maximum range of motion. To exchange from yang to yin while you are stepping bagua, start from your most aft position with the ball circling close to your body.

While pushing off your aft foot, begin to exhale and open your chest. As the ball begins to move forward, redirect its path toward the center of the circle you are walking.

Stepping forward, allow the ball to continue on its path forward and into a yin pattern. With the proper timing, you will simultaneously end with the ball on the far outside section of your yin circle and the opposite foot forward.

To change back to a yang direction while stepping, start from your most aft position with the ball circling on your right aft section of the pattern. Push off the aft foot while exhaling and opening the chest. As the ball moves forward, redirect its path to the center of the circular pattern. Step forward with the opposite foot, and allow the ball to follow through to the opposite side the circle moving in a yang pattern.

Practice this exchange while moving aft as well. Each time you exchange in this direction you will begin to do so from your most forward position in the pattern. The ball should also be in its forward section of the pattern and shall pass through the center of the existing pattern on each exchange. Continue to practice this pattern with the exchange occurring on both your forward movement and backward movement until it can be executed smoothly. In addition, the exchange should be done while bagua stepping both to the right and left.

The next stage of yin-yang circling exchange will be a complete freestyle movement where you are exchanging not only between yin and yang, but also between vertical and horizontal. Practice this exchange while stationary, rocking, straight line stepping, and bagua stepping.

Up to this point we have described two locations where you are able to exchange between yin and yang. One is located in the center of the pattern while the other is located in front of your dan tian. Now that you are going to add exchanges between vertical and horizontal patterns, you may discover additional areas to execute your exchanges. For example, while stationary you may exchange from vertical to horizontal by moving through the center of the pattern or by simply turning your waist as the ball is descending in the pattern.

There can be many different locations for this to occur. The wuji point is not an absolute location or point. The prevailing rule for exchanging is that the ball may not stop within the pattern to reverse its direction. For each of these patterns, begin with a yang vertical circling pattern. You may, however, elect to start with either the vertical or horizontal pattern in either the yin or yang direction.

(The above excerpt is from Tai Chi Ball Qigong for Health and Martial Arts by Dr. Yang, Jwing-Ming and David Grantham.)