The Players in Self-Defense | YMAA
Skip to main content
FREE Shipping Order Over $70. (US Only, Conditions apply)    |   Up to 40% Off. Exclusions apply.

Home >> Articles >> The Players in Self-Defense 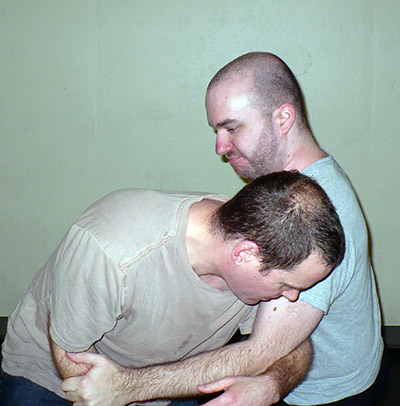 The Players in Self-Defense

No matter what levels of force you need, the players stay the same. It is critical to be able to read the players. The threat dictates the situation. You must understand the problem before you can choose a solution. A charm predator is one thing. A drunk wanting to show off for a girl is an entirely different problem. You must learn to read threats and threat dynamics.

No matter what levels of force you need, the players stay the same. It is critical to be able to read the players.

The threat dictates the situation. You must understand the problem before you can choose a solution. A charm predator is one thing. A drunk wanting to show off for a girl is an entirely different problem. You must learn to read threats and threat dynamics.

We cannot emphasize enough that everything hinges on this:

Part of understanding the threat is listening. Another part is monitoring. Whatever you choose to do, pay attention to make sure it is actually working. You may have a wonderful plan, but as the old adage goes, few plans survive contact with the enemy. The other guy has plans too.

Long ago and far away, he had a small group of officers with extra training who were supposed to talk down violent inmates who had made weapons and barricaded themselves in cells. The reasoning was that a person talking is far cheaper than calling out a team.

One of the newer members of the team was intelligent and very personable. Loved to chat. Did really well in classes and had almost a zero percent success rate in real incidents. The officer had never really understood that Crisis Negotiation Teams (CNT) are not really about talking people down as much as they are about listening people down. As long as the officer was talking, she felt that everything was going well.

The officer also seemed to be completely unaware that she had never talked a single inmate into surrendering. The tactical team had to fight every one last one she worked on.

You, of course, are the first part of the equation.  How do you handle this situation? How do you present yourself?

You will also have a role to play. If it is a predatory assault, the threat has already assigned you the role of victim. If it is a dominance display ("You lookin' at my woman?"), you have been assigned the role of rival. Before the assault during the verbal stage, you may be able to pick your own role. By the time the threat becomes physical, it is too late.

In the opening example, the inmate wanted the catharsis of a fight. He wanted to hurt and be hurt. He didn't want to fight one officer because he knew he was going to lose and wanted to lose with what he saw as honor. He would have preferred to fight five or six or ten officers, so he played his script and got angry and loud. He expected Rory to play the other half of his script. To get angry or indignant and rush to call a bunch of officers in for an epic fight would have led nowhere. Rory didn't.

Staying on a script is subconscious. When the script changes, when you don't play your role, the other guy has to think. If the conflict is based on anger, getting the adversary to think can lower his level of tension. With a predator who is deciding to use violence for logical ends, you want him worried, concerned that there are risks of which he is not aware.

The role you choose can be an "end run" around your personal style. Role-playing, even in a real situation, can be effective. How would a drill sergeant handle this? How would a chaplain? You automatically recognize that those are two very different but very effective communication paradigms.

Caution! DO NOT cast yourself in the Billy Bad-Ass role:

Criminals have much more experience bluffing citizens than citizens have bluffing criminals.

The third player in any use of force is the witness or witnesses. When and if the police show up, when and if you are standing in court, the witnesses will be critical to how your act was perceived.

Neither of us is a very emotional fighter, which is good. But even if we did get angry, we would do our best not to show it. Witnesses need to see a professional reluctantly but competently doing what needs to be done. Any abusive language or profanity or threats or even yelling puts that image at risk. Any words or tone that you use before or even during a confrontation can be remembered and will be used to reinforce or to undermine your claim of self-defense. Fear is okay. Showing anger always hurts you.

Legally and ethically, your motivation matters. You shoot someone to stop him from killing a child and you are a hero. You shoot someone because you thought he was an ass, you're a criminal—despite the fact that a guy trying to kill a child is an ass.

The third über-fundamental is RTPV, the rate, tone, pitch, and volume of your voice. This is how people read your emotion, your intent, and your commitment.

Rate and volume are indicators of intensity. The more excited someone is, whether anger or fear even love—ever watch two teenage girls trying to whisper about romance?—the louder they tend to be. And the faster they talk.

Tone and pitch indicate the quality of emotion. Tone can be difficult to define in a meaningful way, but take the example of a flute and piano both playing the same note (pitch) at the same volume. They still sound different. That difference is the tone. Or maybe the timbre. Whatever. With humans, it is easier—anger sounds different than fear. And different angers have different tones—icy, hissing contempt ("What are you doing here?"), or outrage, ("Knock it off!") to name a few. There is something in the tone that even reads as sincerity or follow-through. For example, the guy who is angry and will act on it sounds different than the guy who is really angry but is afraid and will back down. Reading these nuances takes practice, but doing so is very valuable.

Pitch shows fear. Specifically, it shows that the stress hormones have hit the system. People become high-pitched and squeaky under stress, which can be funny…except you might not want funny when talking someone down. This is why having a low-pitched voice is an asset in calming others. It projects a lack of fear, and a lack of fear is safety. A high-pitched voice, on the other hand, makes it almost impossible to successfully work with people in crisis. Subconsciously, it is read as fear, and humans, like all primates, find fear contagious.

Always monitor the potential adversary's RTPV. Especially look for changes. If pitch goes up, so has adrenaline. You just moved one step closer to action. If the tone switches from injured to angry, the other guy has just decided on whom to vent his frustration. If rate goes up, the threat is becoming more excited and the situation could break soon, for good or bad. Same with volume.

Control your RTPV as well. These are the elements underlying your speech that indicate to the adversary who you are. Words are merely tricks, in a way. The other guy will decide whether your words can be trusted based on your RTPV and your demeanor. In other words, the threat will not respond to your words so much as he will respond to YOU.

One RTPV trick: When I get called to deal with agitated bad guys, I initially match their level of intensity. If they are loud and screaming, then I scream too, but just for a second. The first word a touch louder than the threat, and then I drop the rate and volume: "HEY! Hey! Hey."

It is remarkably reliable how the threat will then slow down and quiet down to match me. Sometimes it takes a few repeats. Note that this is volume and rate only. I want the pitch low, showing no fear and offering safety, and the tone is neutral—not angry, fearful or, especially, judgmental.

Lawrence A. Kane discusses "What are you Fighting For?" on Martial-Secrets YouTube video.  Do you have a goal?  Should you run away or run towards safety?  Should you get involved?  He touches on escape, restraint and stop, the Castle Law, Brave Sir Robin and other aspects of self-defense.

The above excerpt is from the book, Scaling Force—dynamic decision-making under threat of violence by Rory Miller and Lawrence A. Kane.