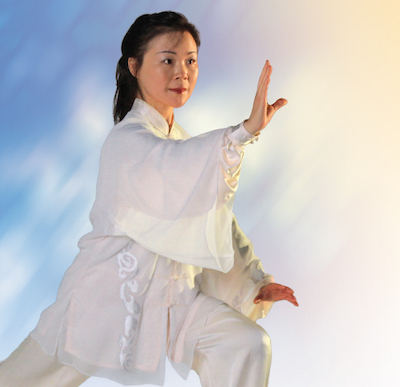 The Simplified Tai Chi 24 form is the most popular tai chi form in the world. With only 24 movements, it is the perfect way to experience the amazing health benefits of a shortened tai chi form, no matter your current fitness level. The ancient art of tai chi is often described as "moving meditation" because it stimulates your mind, body, and spirit.

The Simplified Tai Chi 24 form is the most popular tai chi form in the world. With only 24 movements, it is the perfect way to experience the amazing health benefits of a shortened tai chi form, no matter your current fitness level. The ancient art of tai chi is often described as "moving meditation" because it stimulates your mind, body, and spirit.

The simplified 24-posture form is traditionally learned in short, easy-to-follow sections over the course of about six months.

With this 6-minute tai chi form, you'll feel stronger and more energized. Tai chi is known for improving balance and keeping the mind sharp and positive. This tai chi form is excellent for beginners at any age, those who want a low-impact whole-body exercise, and those with limited time.

The Simplified 24-Posture Tai Chi form was compiled by the Chinese Sports Commission in 1956, in an effort to promote tai chi chuan. The 24-Posture Tai Chi form was derived from the traditional Yang Style Tai Chi Chuan long form. Many masters worked together to simplify and standardize tai chi chuan.  Many of the more complicated and repeated movements were deleted from the long form, so it is easier for people to learn and practice. Although this sequence has been used primarily as a health promoting exercise, it is still a sequence with martial art applications.

Because this form is based on Yang Style Tai Chi Chuan, the training guidelines and principles follow the characteristic "flavor" of the Yang Style. The entire sequence should be performed at an even pace with no abrupt changes.

Tai chi chuan is a martial art that combines martial arts movements with Qi (energy) circulation, breathing, and stretching techniques. It utilizes the ancient philosophy of Yin / Yang and the Five Element Theories for its foundation and to establish its training principles. The training of taijiquan includes the integration of mind, qi, and body. The focus on qi circulation was initially used for the purpose of increasing the internal strength of the physical body for combat. The same techniques that were capable of developing internal power for combat, also proved to be effective as life prolonging, healing, and rejuvenating exercises. These health benefits are the primary contributions that led to the popularity of taijiquan today. The value of taijiquan is in its potential to strengthen and repair the physical and energetic body, which in turn has the potential to prevent and cure diseases.

With regular practice of Taijiquan, it is possible to keep blood and energy circulations smooth in the entire body, and prevent disease. Traditional Chinese medical theory places prevention in the highest esteem; correcting a problem before any symptom occurs. If a problem already exists, it can be regulated through the regular practice of taijiquan, before it causes any major damage. If the problem is already causing damage, then drastic measures may need to be taken to repair the damage. Once the damage is repaired, the non-jarring, slow, and integrated movements of taijiquan make an excellent recovery exercise for regaining health.

The slow, relaxed, condensing and expanding movements of taijiquan provide a total body exercise. As the muscles are allowed to relax, blood circulation can be improved. The gentle movements loosen up the spine, ribs and the internal organs. By "massaging" the organs, you can loosen up the tension around them and increase the blood circulation. The slow movements allow the body to move with less tension than high pace movements, which require fast muscle contractions. The slow movements of taijiquan allow the lungs to be more relaxed and to increase the intake of oxygen.

Taijiquan exercise helps to redistribute your qi (energy) in your body, by leading excess energy from tense areas, so as to regain balance. Performing taijiquan early in the morning clears the mind and prepares you to tackle any task during the day. Qi is the intrinsic substance or the "vital force" within all things in the universe.

Chinese medicine believes that sickness is the result of the body's inability to properly adapt and adjust to the "evil" influences of nature. Because humans are a part of nature, any change in nature will inevitably affect the human body. When the influences of nature go above and beyond human adaptability, the balance between human and nature is destroyed. The human body functions will then be affected and sickness will result. Sickness will last until the body can attain the proper balance.

The Tai Chi 24 form takes only six minutes to practice, but offers benefits for your entire life.