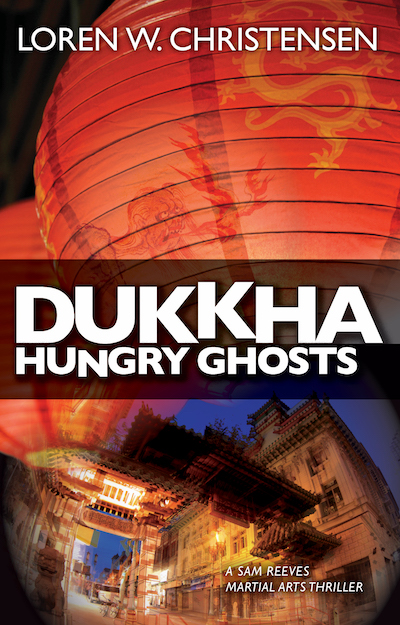 Prologue from the book: His legless torso swings back and forth between his arms, as he hand-walks along the dim but ornately lit cobblestone path that meanders about the lavish yard through tall bamboo, past large stone Asian lanterns, around half a dozen towering palm trees, and encircles a large pond. Twelve-foot high brick walls border the large yard on three sides.

Prologue from the book

His legless torso swings back and forth between his arms, as he hand-walks along the dim but ornately lit cobblestone path that meanders about the lavish yard through tall bamboo, past large stone Asian lanterns, around half a dozen towering palm trees, and encircles a large pond. Twelve-foot high brick walls border the large yard on three sides.

Tex has lived with Samuel and his late wife, Kim, off and on over their four-decade friendship, and this house, loaned to Samuel by a friend, is the most lavish of all. The two-story home and garden would be considered upscale anywhere, but in Ho Chi Minh City, Vietnam, it's considered a palace, far more than the two men want or need. They would be moving out soon, anyway. Too much death and sorrow had recently invaded the grounds, and the house.

The downpour had ended an hour ago, around two o'clock in the morning, and now the only sound in the soggy quiet were fat drops of water falling from thirty-foot high palm trees to splatter against the gravel and cobblestones, and into the koi pond. Samuel squats Asian style on the pond's edge and pensively stirs the water with his index finger.

Although Samuel's back is to Tex, Tex knows the sixty-five-year-old master of Ten Thousand Fists style is well aware of his approach.

"You do not need to come out with me, my old friend," Samuel says softly in Vietnamese without looking up, his finger still trailing in the water. Six multi-colored koi float in side-by-side formation two feet away.

Samuel's favorite, a large, battle-scarred white warrior, floats in silent communion about two inches from his finger. "One old veteran recognizing another," Samuel thought the first time he saw how the grand old fish bravely moved toward his hand. The owner of the property said it was 65 years old, same age as Samuel who too is battle scarred.

When asked what animal they would like to be, most men indicate a black panther, lion, or eagle. Samuel would be a koi, as they are serene, wise, and brave.

He says, "You need your beauty sleep, Tex, and, if I may add, you are in desperate need of it." Tex hand-walks up next to his friend, his dark eyes twinkling from Samuel's tease.

"Sorry, but I have to come out with you." Samuel knows he would say this. Tex is wearing his usual black tank top, revealing his heavily tattooed muscular arms and shoulders, and his usual blue Nike shorts, the short pant legs bunched underneath his one-inch stumps. Some old soldiers pin their empty pant legs at their hips, but Tex never does. Whenever someone asks why, he shrugs, and says, "Maybe legs grow back." Tex is an optimist.

"I am sorry for my words," Samuel says.

Of course he knows Tex is looking out for him, the same way he looks out for Tex, something they have done for decades,
"My head has not been screwed on right for a few days."
"Only for a few days?" Tex asks innocently.

Tex had been assigned as a scout for Samuel's Green Beret unit in Vietnam's Central Highlands in 1971, and the two men clicked within minutes of meeting each other.

Communication was never a problem; Samuel had learned to speak Vietnamese at the military's Defense Language Institute in Virginia prior to being sent over. He discovered an aptitude for the rhythms of the language and the people. It was on their fifteenth mission when fire and death rained down on the company and turned Tex's legs into red vapor and slammed a tree branch against the side of Samuel's head. With both legs gone, Tex dragged his unconscious friend out of the line of fire. Now they sit in silence, comfortable with one another, as they have always been.

Samuel meditates on the koi 's lazy movements and Tex, his eyes closed, the back of his right open hand nesting into the palm of his left one, focuses on the sound of water drops falling from the towering palm trees.

The night is humid, even for Vietnam, and the heat sticks on their skin like fresh paint. A putt-putt sound of a passing pedicab outside the walls breaks the silence.

"Do you know the date?" Tex asks, opening his eyes slowly, his line of sight falling where the south wall meets the east one, the only part of the yard not illuminated by the subtle lighting. The corner is as eerily black as that overcast night in the valley near the Laotian border. The night three hundred Cong came at them.

Tex squints at the intersection of walls. The corner over there seems darker than it should be. No, not seems. It is darker.

Had the corner always been so … black? He looks over at Tex, who is looking at him now.

"I nearly forgot," Samuel whispers. "This is the beginning."

Tex looks back toward the corner. "Yes."

An especially large drop of water rolls off a palm branch, topples thirty feet through the windless night and splashes next to the grand old white fish. A veteran of much worse things than a heavy drop of water, the white koi remains motionless while the others whip their fins and curl their fat bodies to hide in the darkest end of the pond. A moment later, they return, looking, Samuel thinks, embarrassed in front of three old soldiers.

Tex looks toward the corner again—and sucks in his breath. Samuel senses his friend's quickened heartbeat. Though Samuel had been trained by monks in the mountains to not show emotions, his heart nonetheless skips a beat and pulses against the side of his jaw.

The darkness is closer now.

"How is it possible?" Tex whispers.

Suddenly feeling vulnerable, Samuel stands, his eyes fixed on the ominous darkness. Maybe it isn't getting closer but only spreading along the walls ... No, it's moving, creeping …
Toward them.

There are three meticulously trimmed bonsai bushes a few feet out from the corner but they are no longer visible. Absorbed by the darkness? Consumed by it? The ambient lighting of the garden does nothing to penetrate the advancing black.

"A portal?" Tex manages, hand-walking back a step. He doesn't expect an answer and Samuel doesn't give one. Both have experienced strange things on the seventh moon, sights and sounds begging for an explanation, but only if one doesn't believe the legend handed down to each generation for hundreds of years. To those who do believe and accept, it isn't any easier on the heart.

The darkness is closer now. Twenty feet away? Fifteen? Hard to determine because there is no edge.

"Samuel?" Tex breathes, looking at the koi pond. The water has begun sloshing from end to end, some of it splashing up onto the gravel covered banks, and the fish are in frenzy; their rapidly flipping fins propelling them into each other, and they poke their heads out of the water to see what is agitating their small world.

Samuel's hand drops to protectively cup Tex's shoulder. "Back up toward the porch," he says. "We cannot fight this …"

As the men slowly retreat, the darkness continues to advance. It moves past a lit Asian lantern and a section of lit cobblestone path and with its passing the light is lost to the black. By the time Samuel and Tex have backed up against the brick steps, the darkness is seconds away from the turbulent water. When it passes over the water they can no longer see the pond.

"What do we do?" Tex whispers raggedly.

The two men have faced withering gunfire, pounding artillery, and deadly rockets, and in the years since, violent hand-to-hand fights in the streets of a country desperately recovering from years of war and occupation.

But this … this blackness … this malevolence …

The fingers of Samuel's left hand tap rapidly against his palm. This inner anxiety is unwelcome. It is something he has not felt since he learned to control his emotions years ago. He doesn't like it.

"Look," Tex says pointing. "It is no longer coming. It is moving back now."

The blackness withdraws at a greater speed than it had advanced.

The men cautiously move toward the koi pond, ready to retreat should the darkness decide to change its course. The pathway is again made visible by the light of the Asian lantern. The darkness continues its slow reversal until it's where Samuel and Tex had first seen it. Then it's gone, and once again the corner is vaguely visible in the predawn hour.

Tex's barely audible voice sends chills up Samuel's spine and the fingertips of his left hand unconsciously resume their tapping. He looks into Tex's eyes, and for the first time in all their years of friendship, he sees fear. Tex is leaning on his right hand, his left one trembling as it points down at the pond. The water is mirror still, and reflects their peering faces and the palm tree above them.

"Gone," Samuel breathes. His watering eyes search the clear pond. His fingers maintain cadence on his palm. Not finding the old white warrior in the water, he looks about the wet gravel on all four sides of the pond, but sees only pieces of the palm tree leaves that had been floating in the water earlier.

His friend the old white koi is simply …

Inside the pond, the other koi swim in tight circles, occasionally bumping into each other like young soldiers who have suddenly lost their veteran leader and don't know what to do.

Samuel's eyes sting at the loss of the white one, the pain made worse because he is responsible. "The date …" he mutters.

Food and incense had not been laid out in front of the house to keep the darkness—to keep them—at bay. So they took their nourishment from what the old warrior holds dear.

This is the way of the hungry ghost.

The above is an excerpt from Dukkha: Hungry Ghosts by Loren W. Christensen. 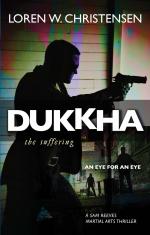 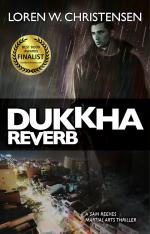 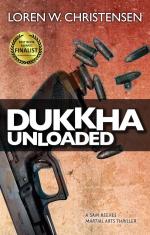