Dukkha Hungry Ghosts | YMAA
Skip to main content
FREE Shipping Order Over $70. (US Only, Conditions apply)    |   Up to 20% Off. Exclusions apply. 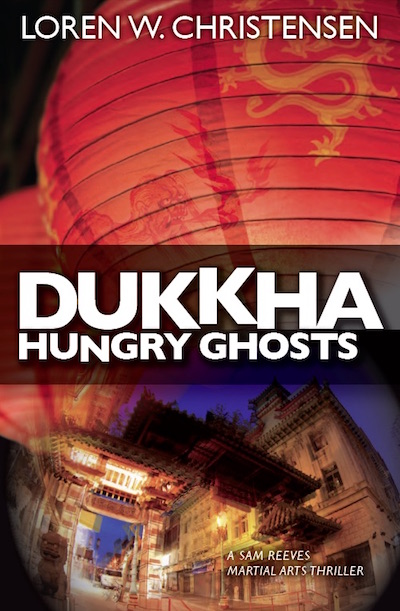 As Mai and the crowd watch in frozen horror, the Lexus slowly rolls again until it's on its top; the front-end still nose down into the water. After a moment, only the rear back tires are still above the surface. Then they too slip beneath the bay.

As Mai and the crowd watch in frozen horror, the Lexus slowly rolls again until it's on its top; the front-end still nose down into the water. After a moment, only the rear back tires are still above the surface. Then they too slip beneath the bay.
**
I'm still wedged into the window, my chest part way through, my face looking up at the floor and seats where the ceiling was. With my left free arm, I'm able to push the dead man's crotch out of my face but his arm remains wedged between my right shoulder and the window frame.

Everyone has fallen down onto the roof. Chang lay motionless in an awkward pile of arms and legs as the Asian and the vamp wrestle each other to get untangled. Father, away from the tangle, draws his knees up to his chest and slips his cuffed hands over his rear and feet. The Asian and the vamp simultaneously lunge at me but Father smashes the vamp in the face with his hands and swings again to club the other guy. They aren't hard blows but enough to stun them for a moment. To me, he says, "Tex?"

"I don't know. He was next to me before we rolled." I pull at the dead man's arm again. "This guy is keeping me from getting in. I might be able to back out but the water will come in faster."

Much of the bay water already inside dumped down on my head when we rolled, some of it pouring out the open window before the vehicle rolled upside down and slipped under the surface. There are a few inches of water slopping about my chest and more of it's finding its way though small openings around the dead man's arm and my torso. It's not coming in anywhere else yet but it's only a matter of time.

"We are going to sink," Father says. "And you will go down, too. Back out and we can try the door." He already said they wouldn't open. If I back out, I'll be free when the vehicle sinks. "Yes," he says picking up on my thoughts. "Then we can get out, too."

"But what if the car sinks fast?" I manage.

"We're going to drown," Vampire sputters through his broken mouth. "Enough bullshit." He lunges for the dead man's leg and yanks it back toward the steering wheel, which extracts the man's jammed arm away from my shoulder. But while it frees me it also frees the bay water to shoot through the larger opening, jostling me hard against the window frame. The force of it is so intense it feels as if it's ripping the flesh from my side. I struggle to fight my instinct to push out and away from the vehicle.

"Come on, Father," I plead. "We've got seconds before it starts to sink faster.

He takes Chang's arm—Chang barely looks conscious. "Help him out first and—" The two men simultaneously grab the old man and begin to pull him away from Father's grip.

"Release him!" Father's voice booms, and his cuffed hands claw the Asian man's face so fast and hard his head snaps to the side with an audible crack, and the side of his face drops heavily onto the top of the headrest. Vampire, his eye-lined eyes wide with shock, quickly lets go of Chang's arm and pushes himself against the other door.

The vehicle is filling with water fast now and my heart is thumping so hard it's hard to breathe let alone think rationally.
"Come on, Chang," Father urges. "Please hurry." Chang looks lethargic and confused. His droopy eyes find me, his expression looking curious as to why I'm draped through the Lexus window with a waterfall surging in around me. "Sam, take his arm. Pull him. Drag him."

The front of the vehicle dips sharply and the water inside spills toward the windshield, washing the dead man against the steering wheel.

Father grabs the seat of Chang's pants and I secure his wrist. I've got no way to stabilize myself because my lower half is out the window and my left arm is pushing against the passenger headrest to combat the force of the incoming water. Using only the power of my biceps, I manage to pull the old man until his face is next to mine.

I look into his glazed-over eyes. "Can you swim?" I shout. Nothing.

"Carry him to the surface, son. I will follow."

Something grabs my leg, then my butt, then my side.

**
I recognize the tattooed hand emerging out of the column of water. Tex.

Chang is pushed toward the other side of the Lexus but my grip on him holds. I don't know how Tex can see, , but his big hand secures Chang's other wrist.

I pull as hard as I can and … I'm out of the window. Because my head was under the waterfall when I pushed away, I couldn't take a breath and my lungs are on fire. I brace my feet against the side of the vehicle and pull, and Tex braces his torso stump against the door and pushes Chang's shoulder toward me.

He's out. The old man batters at the water with his arms, his eyes wide, his mouth opening and shutting and opening again. He's drowning.

I kick with my feet and stroke with my free arm. Tex is only using his free arm but he's still slightly ahead of me. My brain fills with fog and my bursting lungs are commanding me to inha— We break the surface.
Air! Never has polluted air tasted so sweet.

"Chang no drown?" Tex asks, after shaking water from his face. He's wrapped his arm around the old man's frail shoulders and is treading with his other. Chang answers by vomiting up bay water.

I see a boat racing toward us. It's marked POLICE, its overhead emergency lights bouncing off the choppy water. Halfway between the pier and us, two sets of arms stroke fast through the water.

I take three big gulps of air and dive.

I won four awards swimming in high school: two firsts and two third places. I wasn't as interested in swimming as I was in the martial arts, but Vicky Cromwell was on the swim team and I wanted to be wherever she was. Now, I silently thank Vicky for the swimming lessons and hope the two years of training pay off in the next few seconds.

The Lexus has sunk to about ten feet. It's getting darker at this depth but shifting bands of pale yellowish sunlight penetrate the water and provide hazy illumination.

When I worked uniform and investigated traffic accidents, I never got used to seeing upside down cars. After seeing thousands moving right side up every day, an upside down vehicle was so aberrant it was sometimes hard for my mind to process. Now, peering down at the undercarriage of the vehicle—one with my father in it—as it slowly descends through murky, cold water, the scene is utterly surreal.

I grab a front-end tire and some part of the undercarriage, and hand-walk to the lower door panel, and pull myself down to the bottom of the passenger window. The surface of the water inside the Lexus is nearing the bottom of the upside down seats. This means there is trapped air, an air pocket.

I squeeze through the window enough to arch my back and stretch my neck up to get my chin out of the water. I drink in the air and blink water from my eyes.

The floor of the passenger side is about half a foot above my head and water is beginning to cover the underside of the seat. "Father?" I hear splashing and grunting but I can't see because the seats are blocking my— Something is happening. No!

My small world turns upside down and I'm abruptly under water, my head and upper torso still protruding through the window. My heart thumps into my throat and once again I feel an onslaught of raw panic. I push against the console to extract myself from the window …
I'm suddenly in an air pocket. How? Don't know and don't care. I suck in air.
I think the Lexus is sideways but without seeing the surface of the water above us, I can't be sure. "Father, are you—"

We're rolling again and the shifting water covers my head. I didn't have a chance to get air. I got to get out of here. I got to get to the surface.

The same yellow-gold hue of muted sunlight streaks through the water, but the light is broken. By what? There's the windshield so the streaks have to be broken by—me, my head and shoulders. This means the car is right side up—for now. I forcefully twist my body around in the passenger window. There's the surface of the air pocket above me. I stretch up until the top of my head hits the ceiling. But there's no pocket.

My fingers claw at the ceiling. Oh God! There's no—
Here! Here it is! I can reach it by angling my face up. Just a couple of inches but sweet, sweet air.
Labored breathing from my left. "Father?" I say turning.

"Take my hand, Father," I say, lifting mine out of the water in front of his face. But he doesn't look at it. He's looking off to my side, his eyes unfocused. "Father!" I shout. He turns his head toward me. His eyes ... Is he in shock too?

Father hasn't moved, other than to tilt his head up, as his air pocket grows smaller. Mine is barely an inch from the ceiling. I take a gulp of air, dip my head under the water and reach for him, finding his shoulder. I slide my hand down his arm to his wrist. When I come back up, I have to press my mouth against the ceiling to inhale.

"Take a deep breath, Father," I say. "I'm going to pull you out the window." He inhales. "Good good good," I say. "Now blow it out and take another, deeper this time." And he does, though his eyes still look blank.

"Blow it out and take one more—"

The man pushes Father's head aside and lunges at me. I start to meet him with another punch—

The above is an excerpt from Dukkha Hungry Ghosts: A Sam Reeves Martial Arts Thriller by Loren W. Christensen