Krav Maga's Training Philosophy | YMAA
Skip to main content
FREE Shipping Order Over $70. (US Only, Conditions apply)    |   Up to 20% Off. Exclusions apply. 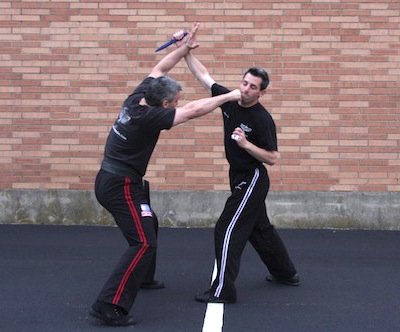 Krav maga is designed around a few core tactics to counter a myriad of attacks. Defenders get tools for their toolboxes along with a general blueprint for how to use them. Imi's goal was survival in any defensible situation. While there are no set solutions for ending an armed confrontation, there are preferred methods using violence of action combined with retzev, or "continuous combat motion."

Krav maga is designed around a few core tactics to counter a myriad of attacks. Defenders get tools for their toolboxes along with a general blueprint for how to use them. Imi's goal was survival in any defensible situation. While there are no set solutions for ending an armed confrontation, there are preferred methods using violence of action combined with retzev, or "continuous combat motion." A few mastered techniques go a long way and are highly effective against both unarmed and armed threats and attacks. The defender learns how to protect his vital points and organs. Equally important, the defender perfects how to debilitate an adversary through anatomical targeting.

Retzev teaches the defender to move instinctively in combat motion without thinking about the next logical move. In short, the defender launches a seamless, overwhelming counterattack using strikes, takedowns, throws, joint locks, chokes, or other offensive actions combined with evasive action. Retzev, armed or unarmed, is quick and decisive movement merging all aspects of one's krav maga training. Defensive movements transition automatically into offensive movements to neutralize the attack, leaving an adversary little or no time to react.

Retzev may be compared to a professional law enforcement or military assault. Professional military and law enforcement personnel use overwhelming violence of action and a preponderance of firepower. Criminals try to do the same. The predatory assault mind-set is ruthless and controlled; it detaches the target from human to either a target resource or target threat. Therefore, if attacked, the kravist must—within the boundaries of the law—become the most viscerally violent person present, capable of defeating any threat.

Combined with simultaneous defense and attack, retzev is a seamless, decisive, and overwhelming counterattack, forming the backbone of the Israeli fighting system. When defending against weapons, retzev is modified ("modified weapons retzev") because the nearside arm often controls the assailant's weapon or weapon arm. Krav maga uses retzev to overwhelm an assailant to complete the defense. It combines upper- and lower-body combatives, locks, chokes, throws, takedowns, and weapons interchangeably without pause.

From a professional's standpoint, violence is paradoxically both unpredictable and predictable, due to one's prior experience and training. There is one certainty regarding violence: there are none. Even with the best training, you may find yourself in a "negative five" position—which is to say initially unprepared for the fight of your life. An assailant, seeking every advantage, will try to catch you off guard.

Field experience, proper training, or both can trigger an automatic fighting response. Realistic training improves reaction capability by allowing an immediate assessment of a violent situation and triggering a corresponding stress-simulated reaction. An attack launched by surprise can force you to react from an unprepared state. Therefore, a self-defense reaction must be instinctive and reflexive. Training ingrains the appropriate responses; whether the threat comes from an edged weapon or gun, you will already know how to react. Training puts honed instinct in control.

A kravist's violent intent governs his violence of action. True self-defense or counter violence focuses not simply on survival but rather on how to optimally injure, cripple, maim, and—if necessary and justified—kill. If you begin with the intent to injure and neutralize your opponent, a trained paroxysm of counter violence is more likely to favorably conclude the situation. Use the closest weapon to attack the closest target. Your goal is to achieve traumatic injury in the shortest time, using the most opportune route. Target the opponent's vulnerable anatomy, damage that anatomy, continue to damage it, and capitalize on debilitating him to move on to the next anatomical target as necessary. Inflicting injury obviously affords the opportunity to impose more injury. For example, delivering a debilitating sidekick to an adversary's knee usually immobilizes him, exposing him to your further onslaught. In short, a kravist's rapid infliction of successive damage, mutilation, and wounds epitomizes the optimum use of counter violence.

To stop an assailant, krav maga primarily targets the body's vital soft tissue, chiefly the groin, neck, and eyes. Other secondary targets include the kidneys, solar plexus, knees, liver, joints, fingers, nerve centers, and other smaller, fragile bones. The professional immediately recognizes that an assailant might also target these same targets and, accordingly, takes measures to protect his own vital anatomy. A protective posture or stance is integral to krav maga training. In addition, krav maga teaches you to disarm assailants and, if necessary, turn the weapon against them. The system differs from other systems that may rely primarily on targeting difficult-to-locate nerve centers.

Forging an awareness of your own personal weapons and an adversary's vulnerabilities is essential to fight strategy and tactics, especially when he is armed and you are not. There are no rules in a fight, particularly in the life-or-death struggle of combat. This lack of rules distinguishes the system from sport fighting.

Krav maga, initially developed as a military fighting discipline, employs lethal-force techniques. Lethal force may involve crushing the skull, cutting off an aggressor's oxygen supply or blood flow, severing the spine or major arteries, or stopping or penetrating the heart, along with several other slower-acting methods of inflicting trauma. Founder Imi Lichtenfeld was resolute that these techniques remain confined to military and professional security circles. While these techniques are integrated at the highest levels of the IKMA curriculum, trainees who are exposed to them are highly vetted.

A key to krav maga—especially for law enforcement, security, and military professionals—is understanding weapon deployment and the capabilities of different categories of weapons. Those categories include—personal (hands, forearms, elbows, knees, shins, feet, and head), cold (impact and edged weapons, plus firearms used as impact weapons), and hot (firearms). Another key is making a seamless transition from one weapon type to another.

In both defending and attacking, recognizing the human anatomy's vulnerabilities is essential to fight strategy and tactics. The human body is amazingly resilient. Therefore, an adversary may only be stopped when his offensive capabilities are put out of commission by nonlethal concussive force, joint dislocations, bone breaks, or cutting off the blood supply to the brain, resulting in unconsciousness. If necessary, krav maga also employs chokes and "blood" chokes to render an adversary unconscious or worse.

From a professional standpoint, even when an attacker is shot with a large-caliber round, it is well documented that he or she may continue to fight. Therefore, the defender must not let down his guard or cease defensive actions until the threat is neutralized. Medical research in one study indicates that 64 percent of those who were shot and received wounds to the chest and abdomen continued to fight for more than five minutes after being wounded. Moreover, 36 percent of those who sustained wounds to the head and neck continued to function for more than five minutes, some still capable of continuing violent offensive actions. These facts have been historically borne out when, in self-defense, Israeli security forces have shot terrorists who nevertheless continued to attack.

This type of terrorist attack with an edged weapon (and with firearms) is, unfortunately, a regular occurrence in Israel. The lessons learned remain the same when dealing with wounded attackers who will continue their deadly onslaught until physically shut down. Hence, the Israeli security forces have a standard operating procedure when neutralizing terrorists.

With proper body positioning, an adversary on the ground can be pummeled severely while giving him little defensive recourse. Logically, in both standing and ground fights, it becomes difficult for an adversary to fight effectively if his hands or limbs are broken, and rendering an adversary unconscious quickly ends a fight. Every type of lock requires moving the joint against its natural articulation with breaking pressure. While we teach certain core arm dislocation positions, once you have an understanding of the biomechanics, you can apply the principles to many situations. This is especially important in the fluidity of a fight. Optimally, you will use the entire force and weight of your body to apply pressure against an adversary's joint. This is the key principle to joint locks. Remember that a joint lock, however decisive and quick, still ties you up momentarily, exposing you to a second adversary—or multiple adversaries—attacking you.

Remember, standing, clinched, or on the ground, krav maga is designed for everyone. A smaller opponent can defeat a larger, stronger, and perhaps more athletic opponent. A well-trained kravist will possess core training in all three combat phases. In a rapidly unfolding fighting chess match, the best way to defend against an offensive technique is to know the offensive technique. Knowing an array of techniques solidifies your ability at an advanced level.

The above excerpt is from Krav Maga Professional Tactics by David Kahn.  Publication Date:  April 2016