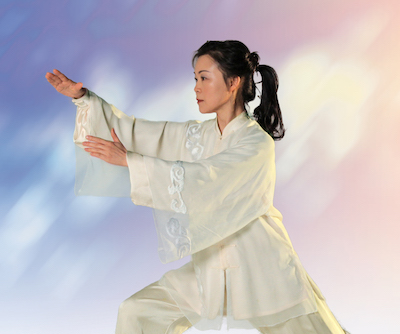 The Tai Chi 48-movement form is ideal for those interested experiencing in the true essence of tai chi chuan, because it combines powerful techniques from all styles into a sequence embodying the spirit of relaxation and softness with circular, continuous movements.  There are over 250 million people worldwide that practice tai chi daily for health benefits.

The Tai Chi 48-movement form is ideal for those interested experiencing in the true essence of tai chi chuan, because it combines powerful techniques from all styles into a sequence embodying the spirit of relaxation and softness with circular, continuous movements.  There are over 250 million people worldwide that practice tai chi daily for health benefits.

The Simplified Tai Chi 48-form was created in 1976 by the Chinese National Athletic Association in order to promote the art of tai chi. While maintaining all the movements from the Simplified Tai Chi 24-form with slight modifications, this sequence also incorporated other more challenging techniques from the Yang, Chen, Sun, and Wu styles of tai chi chuan. The martial applications and Tai Chi Push Hands techniques for each movement are still intact in this shortened form.

Because it includes various movements and techniques from the four major styles of tai chi, the level of difficulty is increased, and the amount of exercise is also increased. The beautiful 48-form takes about ten minutes to perform, and it appears very lively and graceful.

The Simplified 48-form maintains the characteristics and "flavor" of Yang Style Big Frame Tai Chi. Therefore, the same guidelines and principles of Yang Style Taijiquan applies to the 48-Posture Taijiquan. It is performed at an even pace with open and expressive movements, with the exception of a few faster-paced movements, which are characteristic of fa jin, which means "emitting power." The Simplified 48-posture form is traditionally learned slowly, adding a few postures at a time, over the course of about six to twelve months.

The practice of tai chi requires that your mind be relaxed, but also focused and alert. The ancient art of tai chi is often described as "moving meditation," because it stimulates your mind, body, and spirit. Many people today practice tai chi as a holistic health regimen, and modern science is beginning to measure the amazing benefits of tai chi.

A major goal in tai chi practice is to improve your circulation of intrinsic energy, or qi. Therefore, even those who only practice tai chi for health should be mindful of the intention within each movement, in order to correctly lead abundant energy throughout the entire form. Pay attention to the feeling within your body continuously, all the way out to the extremities of the fingers and toes.

The Tai Chi 48-form was devised to be a more balanced form, with certain moving patterns practiced to both the left and right, such as Single Whip and Wave Hands Like Clouds. This gives the legs a more even workout, and helps you to develop greater understanding of the purpose, or intent, of each movement. Remember to maintain slight curvature in the arms and legs at all time.  Do not completely straighten the limbs at any point. The shoulders and elbows should remain relaxed and dropped, while the wrists are flexible and variable depending upon each hand form. Because the form includes more flexible footwork from Sun and Wu style, it is important to be mindful of your stepping, so that you maintain enough width between the feet to stay balanced and rooted.

In conclusion, the study of tai chi involves three aspects:

Tai chi has meant so much to me in my personal life. Chinese martial arts is a beautiful and profound art. It is the essence of Chinese civilization and is a major component of the Chinese historical, cultural, social, medical, and philosophical development. It is also a life nourishing, mental and spiritual training. I am who I am today because of practicing Chinese martial arts.