The Krav Maga Advantage | YMAA
Skip to main content
FREE Shipping Order Over $70. (US Only, Conditions apply)    |   Up to 20% Off. Exclusions apply. 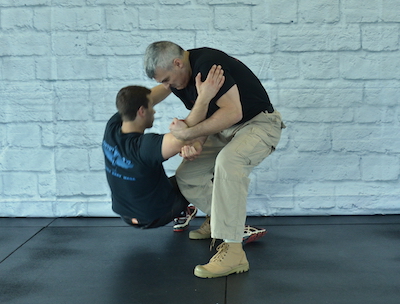 The key is your mind-set: to neutralize an opponent quickly and decisively. In fighting sports, the following tactics are generally banned: eye gouges, throat strikes, head butting, biting, hair pulling, clawing, pinching or twisting of the flesh, striking the spine and the back of the head, striking with the tip of the elbow, small joint manipulation, kidney and liver strikes, clavicle strikes, kneeing or kicking the head of an opponent on the ground, and slamming an opponent to the ground on his head. These are exactly the combined core tactics krav maga emphasizes.

The key is your mind-set: to neutralize an opponent quickly and decisively. In fighting sports, the following tactics are generally banned: eye gouges, throat strikes, head butting, biting, hair pulling, clawing, pinching or twisting of the flesh, striking the spine and the back of the head, striking with the tip of the elbow, small joint manipulation, kidney and liver strikes, clavicle strikes, kneeing or kicking the head of an opponent on the ground, and slamming an opponent to the ground on his head. These are exactly the combined core tactics krav maga emphasizes.

Operators may have different strengths and capabilities. Some may be strong punchers, while others excel with infighting, throwing, or takedowns. The krav maga system is designed to best conform to defenders. A defender does not have to compromise his capabilities to conform to any set solutions or prescribed movements. To adopt and streamline the krav maga method, you must personalize the techniques and make them your own. This begins conceptually and ends tactically. Choose the ballistic strikes and other combatives you feel most comfortable with and that will give you the greatest confidence.

Footwork and body positioning, whether standing or prone, allow you to simultaneously defend and attack, leading to seamless combative transitions essential to retzev. The key to evasion is moving out of the "line of fire" or the path of an opponent's offensive combatives. Clearly, positioning yourself where you can counterattack your opponent more easily than he can attack you is most advantageous. It is self-evident that fight positioning determines your tactical advantage. Optimally, a skilled krav maga fighter will move quickly to a superior and dominant position relative to his opponent, known in krav maga parlance as the deadside.

The deadside often provides you with a decisive tactical advantage. This strategy should revolve around your capabilities and preferred tactics involving long, medium, and short combatives combined with evasive maneuvers. Positioning becomes even more important when facing multiple assailants. Once superior position is achieved, the opponent will have minimal ability to defend or to counter your retzev attack. Remember, retzev, because it uses all parts of your body and incorporates multiple facets of fighting, provides an overwhelming counterattack.

When facing multiple assailants, you must only engage one at time using optimum combatives and movement while putting that opponent between you and any others. Inexperienced assailants will fortunately group together. If the student uses correct tactical positioning (never between two assailants) he limits the assailants' abilities to harm him. There is a limitation on how many assailants can occupy the same space to get at you. In select circumstances, you may have to go through them. (Krav maga has techniques for this.)

Reacting to an Ambush

Reacting from surprise allows the use of more force because you do not have time to rationally or reasonably analyze the situation. In other words, you are reacting defensively and catching up necessarily within fractions of second to calibrate your response. Again, krav maga's goal is to have you react instantaneously without thinking. To reiterate, the overriding essence of krav maga is to neutralize an assailant immediately. The moment you are deemed safe, any additional defensive actions may, in fact, become offensive actions. If you continue to injure an assailant who is no longer a threat, you could face civil and criminal charges—especially if you deliberately turn the assailant's weapon on him.

Five Elements of an Ambush

Blind spots inhibit human vision. Therefore, a low-line kick or uppercut-type strike may come in under the visual radar. Human vision is also limited in judging the speed from an attack coming straight on recognizing the speed of something traveling against a static background. Therefore, tactically, straight attacks are more difficult to recognize and defend. Oblong attacks such as hooks and roundhouse kicks are, accordingly, more recognizable. In addition, these looping types of attacks, by their nature, have to travel roughly three times the distance of a linear attack.

Trained fighters look for the mental commitment and corresponding physical manifestations such as blood draining from the face, increased breathing, and a subtle weight shift forward before the actual physical attack. While pupil dilation and constriction can indicate an impending attack, an experienced fighter may attack you without these phenomena, precisely because he has done it before and it has become second nature. One strong indicator is a head-to-toe slight shudder as adrenaline pours into his system. If he contracts his frame rather than expanding it, you may be dealing with a trained fighter coiling to spring into action.

Importantly, it is widely accepted that roughly eighty-five percent or more of the world's population is right handed and, therefore, right-side dominant. The majority of attacks are likely to be initiated by an attacker using his right arm. Nevertheless, it is crucial to train against all contingencies, including attacks initiated with the left hand. A skilled fighter will use all of his limbs in various combinations and may change his stance repeatedly to gain an advantage. Yet, the majority of unskilled or semiskilled attackers will initiate from their strong side. When training, we suggest taking this consideration into account. This can become especially important when closing on someone to put them into dominant control by controlling his or her favored arm.

The Israeli krav maga curriculum incorporates a number of throws. Moshe Feldenkrais, who trained in Japan directly under the legendary Kano Jigoro, awarded a black belt in judo to krav maga founder Imi Lichtenfeld. Selecting a throw is obviously determined by body positioning and the dynamics of the entry for the throw. The goal with throws and takedowns, as with all krav maga thinking, is to accomplish the greatest effect with the least effort.

The formula is simple: krav maga is designed to overcome any disparities in size or strength. The key, once again, is simultaneous attack and defense to disrupt the attack and immediately redirect it into a throw or takedown, using gravity and the ground to further neutralize the threat. A strong combative will stun the assailant, allowing you to enter and unbalance him so you can complete the takedown or throw.

An unbalanced adversary is obviously easier to displace than a balanced one. Even if your initial throw or takedown is unsuccessful and the assailant maintains partial balance, you must continue with the retzev concept of continuous combat motion, applying a subsequent combative or series of combatives to keep attacking the threat. Always attempt to keep your retzev seamless, transitioning from one technique to another in a logical manner.

At the green-belt level (third belt level in the traditional krav maga curriculum), Imi incorporated several of judo's most accessible and effective throws and takedowns. In choosing these throws and takedowns, Imi married these techniques with many of the core defenses against upper-body attacks. In letting gravity take its course, coupled with momentum generated by the throw or takedown, Imi recognized that slamming someone into the ground would help take the fight out of him—or, at the least, momentarily diminish his offensive capabilities. When an assailant attempts to throw you, by the very nature of movement and tactics, he is creating an opening for you to counter throw. This is true of all combatives, including kicking, punching, knees, and elbows. A good fighter will minimize these openings, but they are still there to be exploited if the defender is skilled enough to recognize and execute the counter technique properly.

The above is an excerpt from Krav Maga Professional Tactics by David Kahn, YMAA Publication Center, pub date, April 2016.