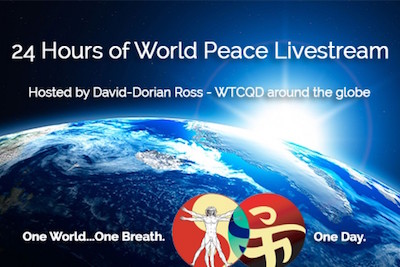 David-Dorian Ross, an acclaimed international tai chi teacher, has worked for decades to bring tai chi to the mainstream. Ross is also a recipient of eight US Gold Medals, a World Silver medal and two World Bronze medals in tai chi. Now he is taking instruction to the next level by offering to the tai chi community the first interactive online streaming video.

David-Dorian Ross, an acclaimed international tai chi teacher, has worked for decades to bring tai chi to the mainstream. Ross is also a recipient of eight US Gold Medals, a World Silver medal and two World Bronze medals in tai chi. Now he is taking instruction to the next level by offering to the tai chi community the first interactive online streaming video. He is holding this online event to promote tai chi and health during April 2016.

On Saturday, April 30 David-Dorian Ross' "TaijiFit" an instructor-training program, will hold its first "Taijiathon" in celebration of World Tai Chi & Qigong Day and to support the Coalition of Hemophilia B. The event will feature, Rick Starks, owner of a tai chi studio, motivational speaker, and is passionate about spreading TaijiFit to the Hemophilia community, and also, newly appointed TaijiFit instructor Cassie Starks.

David-Dorian Ross invites you to take time out to celebrate life, happiness and wellness. The event will include door prizes, Natural Wellness Product Information from NYR, and taiji classes. These classes are held on line. Live! (via 2-way video.) All you need is a computer, iPad or smart phone to join in. Learn a little taiji, support a worthwhile cause, and celebrate with others around the world in this amazing art form. Registration required.

David Dorian-Ross will broadcast a video show, entitled, "24 Hours of World Peace" during World Tai Chi & Qigong Day, on Saturday, April 30, 2016.  The goal is to support the spread of this wonderful event around the world and to further the work of the founder Bill Douglas and Angela Wong Douglas.

"Let me share our vision. Imagine that for just one day, thousands of people around the world gather in parks, stadiums and auditoriums and for just one-hour dance and play together," said David-Dorian Ross. "No competition. No judgment. No politics."

This is the vision of World Tai Chi and Qigong Day (WTCQD)—the brainchild of taiji teacher Bill Douglas. Each year on the last Saturday in April, local taiji (tai chi) lovers congregate to put on public demonstrations, free classes and exchange ideas and techniques. It starts in New Zealand at 10 a.m. local time, and progresses time zone by time zone for 24 hours. The motto of WTCQD is simple and beautiful: "One World, One Breath."

On this day, a massive tai chi group will be performing in Egypt at the very same moment that a similar group is demonstrating their form in Israel. A few hours later groups from all over South America, (where WTCQD is an official holiday) will be going through their forms with fans and swords and colorful silk uniforms.  These events continue on and on across the planet.  Watch "24 Hours of World Peace" hosted by David-Dorian Ross on TaijiFit, World Tai Chi & Qigong Day, or YouTube.

"Now, imagine that you could see all these events LIVE, as they are happening on your own computer screen or mobile device," said Ross.  "This is our project. It's called "24 Hours of World Peace." We will be working with local participants from around the world who will stream their individual events to us, and we will web cast them out again. People all over the world will be able to watch a world of events all in one place. I will personally emcee the show."

Every hour you will be able to tune in to watch demonstrations, interviews, short video programs and more. You'll even be able to interact with other people—asking questions and chatting with other viewers from around the world.

"24 Hours of World Peace" is more than just a show about taiji.  It is a way of seeing first hand that people from all walks of life, from many nations and ethnicities can put aside any differences they may have—and for just one day play and dance together, sharing their love of Taiji.

Please join the "Free Email Mailing List" to see tai chi photos and videos from around the world.

About David-Dorian Ross:  He is the creator of TaijiFit: Bootcamp for the Soul, and the founder of  "TaijiFit," an instructor-training program. He is America's "Chi-vangelist," whose public appearances introduce people to the benefits, accessibility and sheer joy of learning Taiji (T'ai Chi). Inside Kung-fu Magazine called him "the man who brought T'ai Chi mainstream."  Martial arts action star Jet Li called him "the American Idol of Tai Chi." He is an author, star of several PBS specials, and has sold many instructional DVDs including Tai Chi Ball Workout for Beginners, YMAA Publication Center.

David-Dorian Ross is “one of America’s favorite” Tai Chi master teachers. He has been studying Tai Chi since 1979 from some of the top masters in the world including Kuo Lien-ying, Doc-Fai Wong, Tat Mau Wong, Anthony Chan, Bryant Fong, Jane Hallander, Jeff Falcon, Yang Jun, and Chungliang “Al” Huang. He’s also a U.S. and world record holder in tai chi forms competition. David-Dorian is an international competitive tai chi champion. He is a former member of the San Francisco Wushu … More »