Tai Chi Sword Techniques | YMAA
Skip to main content
FREE Shipping Order Over $70. (US Only, Conditions apply)    |   Up to 20% Off. Exclusions apply. 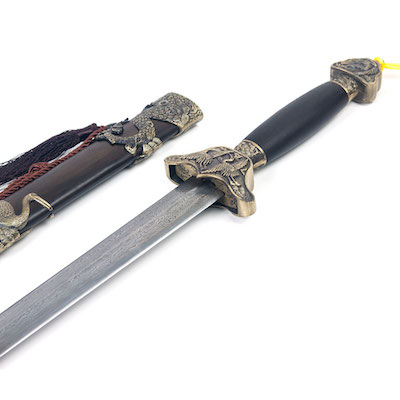 Generally speaking, due to geographical differences, northern Chinese martial artists have developed techniques, which emphasize long and middle range ﬁghting, while southern martial artists focus on ﬁrm root, and specialize in short and middle range ﬁghting. Sword techniques, which emerged, therefore differed according to this developmental inﬂuence. For example, the sword techniques of the southern styles emphasize defensive techniques. Therefore, neutralizing, sticking, adhering, and coiling techniques are often the key words or essential secrets of the practice. This is different from those of the northern styles, in which offensive techniques receive more attention. In order to make the techniques most efﬁcacious, the northern sword is relatively longer than the southern sword.

Taiji sword was developed at Wudang Mountain, which is located in Hubei Province, near the geographic line of division the Yangtze River, between the northern and southern styles. It is because of this that taiji sword techniques developed there mix both northern and southern elements. Although the length of the taiji sword used in this region is relatively longer than the ones used in most other styles, the techniques developed still focus on neutralizing, sticking, adhering, and coiling. In one way, the style is extremely offense oriented, but in another, it is very defensive. It is because of this that taiji sword is well known as one of the most effective sword styles in Chinese martial arts history. It is also because of these unique characteristics that taiji sword is hard to learn, and even harder to reach its highest levels of understanding and skills.

However, even though there are many different styles, the basic theory remains the same. For example, in order to make the techniques effective, internal power must be trained. Moreover, in order to protect the sword from damage (especially the one-third nearest the tip), most of the techniques that were developed are somewhat similar. It is because of this reason that it is fairly easy, once you have mastered one style, to adopt techniques from other styles and blend them into your knowledge and skills.

Before introducing the key techniques for the sword, a few things should be noted. Over all the centuries of its development, many sword techniques were created. Often, due to lack of communication and secrecy, confusion in terminology is common today. Often, the same basic technique has several different names, given by different styles. Occasionally, even techniques with the same name can be slightly or very much different from each other.

Therefore, when you start learning these key techniques, you should not be confused and restrict your mind in the areas of terminology and narrow technical meanings. Cast your mind widely, and absorb as much information as possible.

There are thirty basic sword techniques for your reference and practice. But I will only discuss seven of them here. If you have a further interest, please refer to my Tai Chi Sword Classical Yang Style book.   Although many of these techniques are not classiﬁed in the Taiji sword basic training, the value of this knowledge is unlimited. It is a wise thing to take advantage of the incredible availability of this knowledge in the world today. Only then can the skill and the knowledge continuously be improved. Often, an open mind is the ﬁrst key to humble learning. I hope from this introduction, you can begin to grasp the essence of general sword practice.

1.  Split or Chop (Pi or Kan) Split means to use the top third of the sword blade to split downward, toward the opponent. It is stated in the Great Dictionary of Chinese Wushu that: "Pi sword, blade vertical, attack by chopping downward from the top." A similar technique can be found as Kan (chop), as stated in the book, The Seven Star Sword. "Kan sword, the sword body is chopping from sideway to forward, to the left, or to the right." In fact, vertical downward chopping is also classiﬁed as split or chop in many other styles. Therefore, technically, the motion of this technique can be either vertical (Vertical Chop, Zheng Pi) or diagonal (Diagonal Chop, Xie Pi.)

2. Stab (Ci) Stab means to strike with the tip of the sword in a straight thrust. It is stated in the Great Dictionary of Chinese Wushu: "Ci sword, stab forward with vertical blade or horizontal blade. The power reaches the tip of the sword. The arm and the sword line up as a straight line." This technique can be performed with the sword blade vertical, with the palm facing to the left (Vertical Stab, Zheng Li Ci) with the palm facing right (Reverse Vertical Stab, Fan Li Ci) or with the sword held horizontally, either palm up (Horizontal Stab, Zheng Ping Ci) or palm down (Reverse Horizontal Stab, Fan Ping Ci).

There is another technique, which is similar to Ci, called Chong (thrust). It is stated: "Chong sword, the sword body is moving from the low to the high and straight forward. The sword tip is attacking more forward and less downward." Therefore, this technique should be executed as a thrust forward, with the tip of the sword pointing slightly upward

3. Slide Upward (Liao) Liao (slide upward) means to use the top third of the sword to slide upward and forward to the opponent's body. It is stated in the Great Dictionary of Chinese Wushu: "Liao sword, use the sharp place of the sword to slide upward from bottom." Naturally, before you can execute this technique, you must ﬁrst neutralize the incoming attack with other techniques. This technique can be performed either to the left (Normal Slide Up, Zheng) or to the right (Reverse Slide Up, Fan Liao).

4. Shake or Sway (Yao, Pao) It is stated in the Great Dictionary of Chinese Wushu: "The sword body moving to the left and right in parallels is called Pao." This means to hold the sword blade horizontally, with the palm facing up, and shake the blade from side to side to block or to cut the opponent, while moving either forward or backward. In application, you may neutralize the attack to the left, and then sway to the right to cut the opponent's throat. You may also neutralize the attack to your right, and then sway to the left for attack.

It is said: "Horizontal sword blade, close to the ground, and attacking from left to right or from right to left, is called Sao sword." Sao is commonly used to attack an opponent's knees or ankles. The sweeping can be either part of the circle, or the entire circle.

Although there are many different Chinese names for draw back or pull, the basic concepts are the same. It is stated: "Horizontal or vertical sword blade, from the front, pulling (the sword) backward, or upward and backward, is called Dai. The power reaches the sword body." It was also explained in the book, The Great Importances of Wudang Sword Techniques, that: "Chou, can be distinguished into upper Chou and lower Chou, two kinds. Its action all in situations that the palm holding the sword faces downward, and the back of the palm faces upward. The tip of the sword points forward, and aims at the opponent's upper wrist, or at the lower wrist when pulled toward the right." Technically, this all means to pull the sword backward. You may also use this opportunity to slide on the opponent's wrist while withdrawing. If you draw back from the inside, it is called an Internal Draw Back (Nei Le).

The above is an excerpt from Tai Chi Sword Classical Yang Style: The Complete Form, Qigong, and Applications by Dr. Yang, Jwing-Ming.