Optimizing Force Using Krav Maga | YMAA
Skip to main content
FREE Shipping Order Over $70. (US Only, Conditions apply)    |   Up to 20% Off. Exclusions apply. 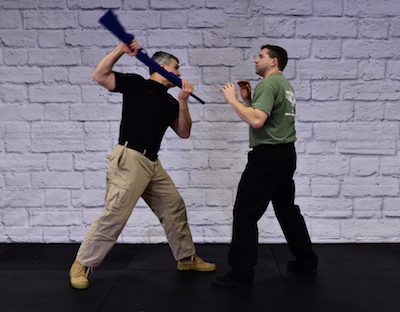 A combative strike will have optimum force if you accelerate your strike in combination with correct body mechanics. Principally, this involves a total body weight shift through the target. Physics teaches that acceleration times mass equals force. Your strike will generate more force if you accelerate your speed as you extend your arm and put all of your body weight (mass) behind your strike. This requires proper body positioning and technique.

A combative strike will have optimum force if you accelerate your strike in combination with correct body mechanics. Principally, this involves a total body weight shift through the target. Physics teaches that acceleration times mass equals force. Your strike will generate more force if you accelerate your speed as you extend your arm and put all of your body weight (mass) behind your strike. This requires proper body positioning and technique.

Krav maga combatives and techniques do not rely on strength or size. Rather, the system works for anyone regardless of strength or size by emphasizing correct body mechanics. In other words, place all of your body weight behind the strike while rotating with your core strength to connect with the greatest force at maximum speed.

The best way to practice these combatives—as with all techniques—is in stages. Each stage must be isolated, practiced, and perfected. As each stage is mastered it is then combined for the whole technique. Using a mirror will help monitor form. While it can be difficult to portray in two-dimensional photos, remember that any combative strike requires the entire body to move in concert.

Regardless of what type of strike you deliver, shifting your body weight forward to deliver your strike will allow you to place all of your body weight behind the strike, connecting with greater force when you combine the strike with maximum speed. Here are some review tips for striking effectively.

1. Use your entire body. As you strike, move the entire body in concert to use your entire torso. Propelling all of your strength and body weight through the strike will maximize its impact.

2. Breathe. Exhale as you deliver the strike. Some people like to use a blood-curdling cry as they strike. Either technique—the cry or the exhalation—will prepare your body for both delivering and receiving a strike. Exhaling facilitates oxygen transfer to your muscles, tempers your movements to keep you in control, and creates a vacuum to defend against a counterstrike.

Here are some of the most common mistakes when attempting both personal- and cold-weapon combatives:

Many people think of hand-to-hand combat as exactly that: primarily using one's hands. Yet correct krav maga incorporates upper-body, lower-body, and cold-weapon combatives in simultaneous combinations. In other words, clubbing, slashing, thrusting, kicks, punches, eye gouges or whips, elbows, and knees are all combined for an overwhelming counterattack; the weapon is not used exclusively. A weapon—either one of opportunity or a designated one—should be considered simply an extension of the body.

Cold-weapon combatives, in many ways, are slight modifications of open-handed combatives. Hence, the importance of learning krav maga's core combative movements, which readily translate into cold-weapon capabilities. This building combative methodology is one of the reasons krav maga is so popular and why elements of the system have been adopted by militaries and law enforcement agencies all over the world.

Krav maga emphasizes low-line kicks. In developing its self-defense close-quarters-combat program, the Israel Defense Force (IDF) forced its soldiers to run long distances with full combat loads. Many of these test candidates were accomplished martial artists who favored high kicks to the head. After an exhausting run in full "battle rattle," the candidates were told to defend against an attack using whatever techniques they felt most comfortable using. Few of the candidates skilled in high kicks could perform them. Their physical taxation prior to the fighting tests made it extremely difficult to kick high. The IDF recognized the need to use only self-defense close-quarters-combat techniques that would work for all trainees, especially under trying circumstances. Therefore, low kicks combined with upper body combatives became integral to krav maga training and more difficult to defend.

As noted, you can combine cold-weapon strikes with hand and elbow strikes (when working with impact weapons, edged weapons, or handguns) and kicks. Withdraw your striking arm(s) quickly into your fighting stance to maintain your defensive and offensive capabilities. As soon as you land the front strike and are retracting your arm, launch the rear strike. The momentum of drawing the front strike back will help catapult the rear strike forward, creating more impact. Our curriculum has a specific program for integrating cold-weapon combatives with personal combatives.

The following two combatives are shown for cold weapons but use the same basic mechanics as a hand strike. Krav maga's underlying strategy is to show one core movement with variations or accommodations. In other words, the footwork, pivoting, and weight-transfer dynamics all remain the same for all thrusting, horizontal, diagonal, or uppercut open-handed strikes.

When using this direct and fast strike, aim for the face, jaw, or throat. You can also aim at the solar plexus or stomach. The correct body mechanics for this strike are similar to those in a baton straight thrust, handgun, or long gun: the body must work in concert as you pivot through the thrust, transferring your entire weight and moving your feet correctly. The idea, as with all combatives, is to refine your body's natural motion.

The over-the-top long-gun butt strike is designed to slam down on your adversary and is somewhat similar to the hammer strike. Targets include the eye ridge, nose, ear, and throat. For the handgun, the weapon's barrel rakes down on the target. Be sure to pivot on the balls of your feet for maximum power.

From the left outlet stance, rotate the long gun up and then over to slam down on the target. Again, pivot on the balls of your feet to engage your hips and core for maximum power. The over-the-top strike uses a hip pivot movement that is a compromise between the movements used in the straight strike and the roundhouse strike. Your arms should not cross but move parallel to one another. Continue with additional retzev combatives as necessary.

The above excerpt is from Krav Maga Professional Tactics by David Kahn.