The Hidden Shaolin Taizu Chang Quan Roots of Chen Taijiquan | YMAA
Skip to main content
FREE Shipping Order Over $70. (US Only, Conditions apply)    |   Up to 40% Off. Exclusions apply. 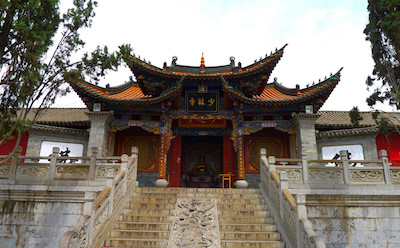 Shaolin Lohan (Luohan) Quan, Tai Tzu Chang Quan, and Taiji Quan (originating from Chen village), all represent a very ancient history of Chinese martial arts that are associated with health and mental well being besides physical fitness and self-defense. By the time the grand Emperor Chao Kuang-Yin had visited Shaolin temple during the early Sung Dynasty and gifted them with a series of books that contained his own Chang Quan and Hong Quan forms and other martial art ideas, Shaolin already had hundreds of years of chi gung and martial arts development under its belt via its creation of the Lohan style.

Lohan was a Shaolin martial art that incorporated the famous "The Muscle-Tendon Changing" and "Bone Marrow Washing" Chi Gung exercises into various self-defense movements that were based on the martial postures seen in the 18 Lohan "holy warriors" statues.

The Emperor himself also had many, many years of martial arts experience by time he rose up the military ranks to governor-general. A leading general during the short-lived Later Chou dynasty (951-60), he usurped the throne, and by the time of his death he had reunited most of China proper. Over time, he learned not only Shaolin Lohan, but also an early form of Tong Bei (which was practiced by another contemporary general, Han Tong), and the Cha Quan-like Moslem martial arts practiced by many soldiers of his time. By the Ming Dynasty, the Chinese military used his Hong Quan forms as part of their training, as soldiers returned to civilian life, they spread Hong Quan all over China, creating "village" long fist. Chao's reign (960-976) followed the Five Dynasties and Ten Kingdoms period of Chinese history, between the fall of the T'ang dynasty (A.D. 907) and the establishment of the Sung dynasty (A.D. 960), with the capital in Bianjing of Henan Province (near Shaolin). His greatest accomplishment, and the reason for the longevity of the Sung, was his replacement of the system of autonomous local military commanders with large professional armies under the control of the central government.

Centuries later, Chen Wang Ting had been an army officer in Shan Tung Province in 1618, and had become an accomplished martial artist. In 1641, three years before the fall of the Ming dynasty, he became the militia battalion commander of Wen County (cited in Gazetteers of Wen County and Huaiqing County,) where it appears that he was exposed to Chang Nai Chou's Nei Jia Quan (the almost lost Chen 108 Techniques Long Form has many similarities to Chang's style.) When he returned to the Chen village in 1644, according to recent research in China of the very recent discovery of lishi jiapu, or the Li Family Genealogy, Chen took the boxing methods he learned from various sources and began to refine and perfect them with his cousins from the Li family, at the Qianzai Temple, about 30 miles from Chen village.

These researchers (Yuan Quanfu; Li Xiangyi; Li Bing; Qu Jian) examined very ancient Li family. Ming historian Wang Xingya of Zhengzhou University spent a year tracing and studying the origin and the authenticity of the Li Family Genealogy. He concludes "the Li Family Genealogy was edited by the tenth generation Li Yuanshan in 1716, and is taken from eye witness accounts." According to the Li Family Genealogy, the early patriarchs of Li, Chen (Chen Bu), and three other families became sworn brothers on their migration from Shanxi in the fourteenth century. This event took place in the Qianzai Temple of Tang Village in Boai County, which is about 30 miles away from the present Chen Village.

By the ninth generation, the Li patriarchs Zhong and Xin, and their inter-marriage cousin Chen Wangting again swore themselves to be brothers like their forefathers, and took the abbot Bogong Wudao as their master at the Taiji Gate of Qianzai Temple. The contents of the papers day that Chen and the Li brothers created taiji yangshen gong, or "the art of Taiji Cultivating Life," and practiced and transmitted wuji yangshen gong, or "the art of Wuji Cultivating Life," shisanshi tongbei gong, or "the Thirteen Postures Boxing." "The art of Wuji Cultivating Life" and "the Thirteen Postures Boxing" had been created by the Qianzai Temple priest Shi Li (614-741,) or Li Daozi, according to stone tablets at the temple, who well studied the Three Teachings, Qianjin yifang: "Revised Prescriptions Worth a Thousand Pieces of Gold," daoyin: "guiding and pulling" and tunai—"expelling the old breath and drawing the new."

It is said that various martial art postures (from nearby Shaolin and other sources, such as the Chang Nai Chou's Nei Jia Quan, from the neighboring Wen county) were combined with classic Chinese internal health theories of passages of blood, airflow, and energy. This new art eventually became known as Chen family boxing. By the 1700's, Chen Wang Ting's style had developed into the Five Routines of Pao Chuoi and Hong Quan, a 32- and a 108-posture Taiji form, and one Duan Da (short strike) form.

Many Forms Lost Over the Ages

Over time many of these forms were said to have been lost. By the end of the century, the art had been passed to Chen Chang Xing, fourteenth generation, who united and simplified the various routines. It is said by some that Chen Chang Xing re-introduced Nei Jia Quan into his Chen family art via teachings from Wang Zong Yue and Jian Fa. According to an interview (by Yuan Quan Fu) with Li Libing, the present eighteenth generation of Li family, Wang Zong Yue came from Shanxi, and lived in the Tang village as a schoolteacher for five or six years. There, Wang studied martial arts with Li Helin, who was born in 1721, the twelfth generation of the Li Family. (Chen Chang Xing was also the teacher of Yang Lu-chan, originator of Yang Taiji Quan. What is very interesting is that the Chen linage, Yang Lu Chan, and Wu Yu Xiang and his brothers, ALL had learned Shaolin Hong Quan in their youth. Many of the ideas and movements seen in Yang style, but not obvious in Chen style, can be found in Hong Quan forms, especially the Xiao Hong Quan form. The concept and movements of Taiji Quan's Push Hands are also found in the Step Forward Push Palms postures in Xiao Hong Quan, along with the Fair Lady Works at Shuttles movement.)

Much talk surrounds the form found in the Ming imperial general Qi Ji Quan's (1528-1587) famous book, Classic of Pugilism (Tang Hao,) as being a source for the moves in Chen Taiji Quan. Qi claimed to have collected and surveyed about sixteen both ancient and contemporary boxing styles, and synthesized them into a 32-posture form intended for troop training. Tang Hao and Gu liuxin listed twenty-nine postures from Qi's Classic of Pugilism that can be found in the Chen Family forms, along with the language paralleling that in the Classic. Other researchers say that the form shown in Qi's book was an actual Tai Tzu Quan form, not a synthesis of styles.

While the Chen forms may have used the names of the postures from the Qi book, if one looks closely at a set of three ancient Shaolin forms received from the Emperor Tai Tzu, called the Shaolin Tai Tzu Chang Quan forms (yi, er, and san lu), one can see some astonishing parallels between the movements of the Chen Lao Jia form and those seen in Shaolin Chang Quan. Also, many of the moves seen in the Shaolin Tai Tzu Chang forms are also found in some older Shaolin Lohan forms, in chi gungs, and in Hong Quan forms as well.

If one skips the repetition of movements that occur throughout the Chen Lao Jia form, one can see that, move by move, the two forms not only follow each other in sequence, but also in functionality. So, even though the names of the Chen postures may come from the form in Qi's book, evidently the actual movements appear to have origins in the Shaolin Tai Tzu Chang Quan forms. It is worth pointing out that today the access to posture names and technical descriptions is unrestricted, but at that time one had to deeply know a style to have access to this information. Why would Shaolin monks give away the names of the postures to non-disciples? Depending on who taught them the forms, perhaps the Chen ancestors did not know the Shaolin names of the movements and instead used the names of similar looking postures in Qi's book? Or perhaps by Chen Chang Xing's time much of the original information was lost and the Shaolin forms were later used as a base for providing movements to taiji skills and ideas?

This commonality between the two styles is especially evident in the Lao Jia Yi Lu Quan of Chen Taiji lineages, such as the Chen Zhao-Pei style of Chen Taiji, now taught by Chen Qing-Zhou (19th generation,) Chen Zhao-Pei was of Chen Fa Ke's father's generation. Also, very similar is the Chen Ting Yuan style of Chen Taiji. As with a number of other recorded sets, this one was lost to the Chen Family in its 13th generation, because the sole 12th generation inheritor left Chen Village. This Chen Bu Fu is believed to have committed a crime while aiding other people. He relocated to Shan Xi region and changed his name to Guo Yung Fu.

In 1975, Chen Li Qing, from Chen Jiz Guo, visited master Hsu Fong Qin Hsu in Shan Xi and recovered the form. Furthermore, Chen Fa Ke's original version of the Yi Lu has extra moves than today's average version of this form, and these extra moves match analogous movements from the Shaolin Tai Tzu Chang Quan Yi Lu form precisely in the same place in the two form's sequence. Surely, this must be more than a coincidence? Clearly, the Chen lineage has had intimate knowledge with these Shaolin Tai Tzu Chang Quan and Hong Quan forms.

Interestingly, the Chen Yi Lu version of Single Whip is done more like an analogous movement in the sequence in the Tai Tzu Chang Quan form. Clearly, the genius of the Chen lineage combining movements from the Shaolin and other forms into the foundation of Chen Taiji forms was that they merged together and synthesized analogously functional movements from these forms to make them more efficient and effective when applied to the internal martial art ideas.

These are the equivalent moves between the Shaolin Tai Tzu Chang Quan and Chen Lao Jia Yi Lu forms:

Qu, Jian. 2006. "A Talk on the Factual Origins of Taiji, Zhenben qingyuan hua taiji." http://www.taijicn.net/viewarticle.php? id=206
**
The above article is reprinted by permission by Sal Canzonieri
http://www.bgtent.com/naturalcma/CMAarticle30.htm

**Sal Canzonieri is a teacher and healer in qigong with a bachelor's degree in Behavioral Science.
Since 1975, Conzonieri has been practicing traditional Chinese martial arts including Shuai Jiao (Chinese art of takedowns,) Tong Bei, Shaolin, Taizu Chang Quan, Yue Jia Quan (Ba Fan Shou,) Xing Yi, Tai Ji Quan, Ba Gua Zhang, and others. In 1980, he began learning and practicing qigong / Neigong. He has been a certified instructor since 1998 by the "International Congress of Oriental Medicine and Martial Arts" to represent the state of New Jersey in Chinese Qigong and Internal Martial Arts. Currently, he is the chief instructor of "The Whippany Kung Fu Club" and the "Natural Chinese Martials Arts & Qigong School of NJ."