Defending Against Multiple Assailants—Part 1 | YMAA
Skip to main content
FREE Shipping Order Over $70. (US Only, Conditions apply)    |   Up to 40% Off. Exclusions apply. 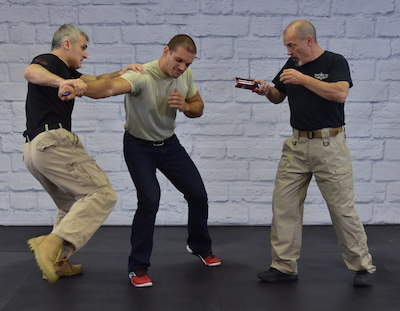 Street violence is volatile and unpredictable.  An attacker will seek every advantage including ambushing you in concert with multiple confederates.  You may well find yourself in a "negative five" position or initially unprepared for the fight of your life.  Krav maga (Hebrew for "contact combat") developed for the Israel Defense Forces will provide you with the instinctive tools and ability to fight for your life and win.

Street violence is volatile and unpredictable.  An attacker will seek every advantage including ambushing you in concert with multiple confederates.  You may well find yourself in a "negative five" position or initially unprepared for the fight of your life.  Krav maga (Hebrew for "contact combat") developed for the Israel Defense Forces will provide you with the instinctive tools and ability to fight for your life and win.

Responsible people seek krav maga training for protection against violence, not to orchestrate violence.  Krav maga training for civilians, law enforcement and military personnel all share the same principal:  to deliver oneself from harm's way.  In short, krav maga's stellar reputation is built on the following four pillars:

Krav maga is usually translated as "contact combat."  This specific translation is significant because of the word "combat" rather than the word "fight."  Combat is considered a life and death situation devoid of any sporting element, chivalry, or rules.  This differentiation is fundamental to krav maga's methods and philosophy.  Importantly, self-defense is reacting from an unprepared state.  Hand-to-hand combat occurs when two combatants square off; they are prepared to fight at any moment.

Krav maga's mindset is that simple survival is inadequate; you must not get maimed.  You must believe you will win.  Your ability to deliver debilitating counter-violence will prevail regardless of an attacker's size, strength, training or physical ability.  Moreover, this belief must be even more firmly rooted when facing multiple attackers.   A key element to survival is the mental and psychological facet.  Mental training not just envisions defending oneself (after all other precautions and de-escalation measures have failed) but also damaging another human.

Recognize it or not, there will be some indicator prior to an attack.  Yet, many people are wholly unprepared to face down violence—even when they see it coming.  You can often recognize verbal, behavioral, and physical manifestations that indicate violence is imminent.  Krav maga self-defense begins where intellectual reasoning ceases.  Non-violent conflict resolution is always your best solution.  If krav maga is the solution, it must be the only available solution.

Krav maga's goal is to neutralize an opponent quickly and decisively.  Krav maga's goal of injuring an attacker leads to the predictable result of stilting the balance of power in a kravist's (someone trained in krav maga) favor.  The party who significantly damages the other party first usually prevails provided he or she presses the counter-attack home to neutralize the threat.  To be sure, there are no rules in a fight, which, all-importantly, distinguishes self-defense from sport fighting.

In a scripted sport-type fight the following tactics are generally banned:  eye gouge; throat strikes; head butting; biting; hair-pulling; clawing, pinching, or twisting of the flesh; striking the spine and the back of the head; striking with the tip of the elbow; small joint manipulation; kidney and liver strikes, clavicle strikes; kneeing or kicking the head of an opponent on the ground; and slamming an opponent to the ground on his head.  These are exactly the combined core tactics krav maga emphasizes.  Do not, however, forget that the level of force you use to defend yourself should be commensurate with the threat.

Krav maga's defensive philosophy is never to do more than necessary, but to react instinctively with violence of action involving speed, economy of motion, and the appropriate measure of force.  Instincts will always dominate over cognitive response under stress.  Therefore, instinctive trained reaction is paramount.  One is taught to strike instinctively at the human anatomy's vulnerabilities. The practitioner relies on being proactive as soon as possible rather than being reactive.  Violent conflict produces severe stress on the human mind slowing down the cognitive process.  Accordingly, krav maga training attempts to place you in the most realistic pressure training scenarios.

Krav maga's prevailing thinking is to do whatever is practical to deliver a defender from harm's way and is designed around a few core tactics to counter myriad attacks.   While krav maga emphasizes several basic core techniques and advanced applications of these same tactics to prevail in a dangerous situation, there is no absolute or correct answer.  The system's application is flexible – true to its modern combat evolution. Techniques are constantly modified, revised, added and discarded as real-life encounters are taken into account, analyzed, and absorbed.

Defenders are given tools for their toolboxes along with a general blueprint how to use them.  Krav maga founder Imi Lichtenfeld along with current Israeli Krav Maga Association Grandmaster Haim Gidon, logically share the goal of developing survival solutions for any defensible situation.  While there are no set solutions for ending an armed confrontation, there are preferred methods using violence of action combined with retzev or "continuous combat motion" to prevail.  A few mastered techniques go a long way and are highly effective against weapon threats and attacks.  A defender learns how to protect his vital points and organs.  Equally important, the defender perfects how to debilitate an adversary through anatomical targeting.

Krav maga's bottom line is to present trained instinctive solutions to defeat any threat with extreme prejudice when warranted.   Krav maga uses the same building blocks from the simplest defenses to the most advanced techniques while emphasizing several adaptable core tactics.  The system's application is flexible in line with its modern combat evolution.  Real-life encounters account for modification, revision, and the addition of new techniques.  Most important, krav maga emphasizes that there are no rules in a deadly encounter.  Do whatever is necessary to overcome the threat in a life or death situation and SURVIVE.

Core tenets of each defense involve deflection-redirections, evasive footwork and upper-body movements combined with simultaneous or near-simultaneous counter-attacks to overwhelm the assailant.  Importantly, the defensive tactics are designed for multiple assailant encounters to protect the defender and incapacitate each assailant.  When necessary, krav maga teaches to commandeer an assailant's weapon for the defender's use.

Krav maga instills an attack the attacker mindset providing the defender with an all important preemption capability prior to a weapon's active deployment.  The defender's goal is not to allow the assailant freedom of action.  Of course, recognition of the warning signs of impending violence allows a defender thwart an attack at its inception.  Importantly, reacting from surprise allows the use of more force because you do not have time to rationally or reasonably analyze the situation.  Again, krav maga's goal is to have you react instantaneously without thinking.

The above is Part 1 of an article by David Kahn, author of Krav Maga Professional Tactics.