Defending Against Multiple Assailants Part 2 | YMAA
Skip to main content
FREE Shipping Order Over $70. (US Only, Conditions apply)    |   Up to 40% Off. Exclusions apply. 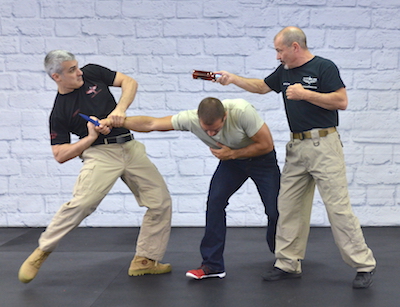 The axiom that street violence is volatile and unpredictable could not hold truer than when facing multiple assailants.  Facing multiple assailants, let alone multiple armed assailants, is an extremely dangerous proposition.  Try to recognize the situation as soon as possible such as if two people are walking towards you and they suddenly fan out to your left and right.  Running and escaping is your best solution.

The axiom that street violence is volatile and unpredictable could not hold truer than when facing multiple assailants.  Facing multiple assailants, let alone multiple armed assailants, is an extremely dangerous proposition.  Try to recognize the situation as soon as possible such as if two people are walking towards you and they suddenly fan out to your left and right.  Running and escaping is your best solution.

Footwork and body positioning, whether standing or prone, allow you to simultaneously defend and attack leading to seamless combative transitions essential to retzev or "continuous combat motion." The key to evasion is moving out of the "line of fire" or the path of an opponent's offensive combatives. Clearly, positioning yourself where you can counterattack your opponent more easily than he can attack you is most advantageous.  It is self-evident that fight positioning determines your tactical advantage. Optimally, a kravist or skilled krav maga fighter will move quickly to a superior and dominant position relative to his opponent, known in krav maga parlance as the deadside.

Achieving deadside positioning often provides a decisive tactical advantage, especially, when the defender can deploy a cold (impact or edged) or hot weapon (firearm) in addition to his personal weapons. Your finishing strategy should revolve around your capabilities and preferred tactics involving long, medium, and short-range combatives combined with evasive maneuvers with weapon deployment.  Positioning becomes ever more important when facing multiple adversaries.   Once superior position is achieved, the opponent will have a minimal ability to defend or counter your retzev continuous motion counter-attack. Retzev, by its nature of using all parts of your body and incorporating facets of a fight, provides an overwhelming the all-important, decisive counterattack.

When facing multiple assailants, you must only engage one at time using optimum combatives/movement while putting that opponent between you and any others.  Inexperienced assailants, will fortunately group together. If the student uses correct tactical positioning (never between two assailants) he limits the assailants' abilities to harm him.  There is a limitation on how many assailants can occupy the same space to get at you.  In select circumstances, you may have to through them. (Krav maga techniques for this.)

When defending against multiple attackers, Imi Lichtenfeld and Haim Gidon's emphasis on using optimum combatives to debilitate an opponent is underscored. Every combative whether it is a kick, punch, elbow strike, knee strike or eye gouge for examples, must count.  The defender must maximize his power and, hence, effectiveness to takedown an opponent both brutally and effectively in preparation for the onslaught of the next opponent. Of course, if you debilitate and maim an opponent quickly, his colleagues may think better of pressing the assault, however, it may be equally true that in doing so, you motivate them more to harm you. Techniques and tactics do not change, however, you must modify your defenses to keep an opponent between you and any other assailants as long and as often as you can.

One strategy is to target the "ringleader" or group leader to potentially sap an aggressive group's collective will to engage you.  If you disable the group leader or another group member brutally and decisively the others may rethink tangling with you.  On the flip side, incapacitating one group member may spur the others into launching an even more vicious attack.  This, however, should not necessarily concern you as you should consider a multiple assailant assault a threat to your life, period.

Tactically, you must keep your footing and balance to avoid falling or being dragged to the ground.  If you were dragged to the ground, you must get up immediately.  As the situation unfolds and necessity dates, it may behoove you to put your back up against a solid object to prevent anyone from attacking you from the rear.  This, however, hampers your mobility, so you should only do this as long as it takes.

It is paramount that you keep moving.  Do not give the assailants a stationary target or any opportunity to coordinate their attack

The key for fighting multiple unarmed (and armed) adversaries is to neutralize one threat at a time brutally and efficiently. To re-emphasize, you cannot get caught between two assailants.  Engage one assailant at a time and debilitate and disarm him immediately, optimally moving to his deadside.  This is where proficiency in "technique" comes into sharp relief.  You must neutralize and disarm the threat immediately only to prepare to engage the other threat(s).  Try always to position the first threat in between you and any other threat(s) to use him as an obstacle or barrier to shield you and gain time for you to gain the upper hand.

Do not go to the ground if it can be helped.  The importance of developing your infighting and anti-takedown capabilities is to remain standing.  You go to the ground at your risk as a second assailant or multiple assailants could come to the first assailant's assistance.  Obviously, fighting multiple adversaries on the ground is extremely difficult.  Krav maga ground techniques incorporate both defensive and offensive tactics.

Note: the foregoing scenario assumes you must defend open-handed; you do not have access to your own weapon or a weapon of opportunity.

You must defend against two assailants both holding edged weapons.  Both assailants have underhand grips.

The above is Part 2 of an article by David Kahn, author of Krav Maga Professional Tactics.