Getting hit doesn't hurt (But love sometimes does)—Part 2 | YMAA
Skip to main content
FREE Shipping Order Over $70. (US Only, Conditions apply)    |   Up to 20% Off. Exclusions apply. 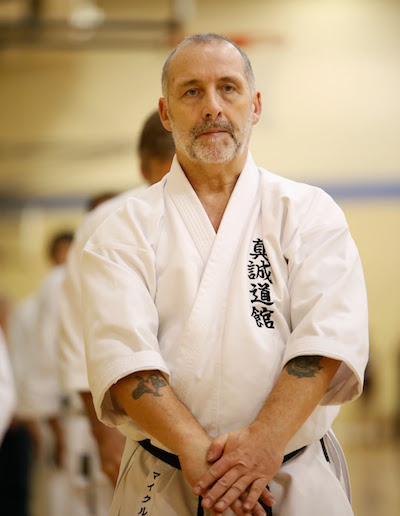 With an estimated 50 million karateka in the world there are no figures that I am aware of to demonstrate what percentage have been training for more than a few years. Certainly, given the direction of karate's growth over the past fifty-years, it wouldn't be too outrageous to suggest that a greater value has been placed on quantity over quality. So what happened?

With an estimated 50 million karateka in the world there are no figures that I am aware of to demonstrate what percentage have been training for more than a few years. Certainly, given the direction of karate's growth over the past fifty-years, it wouldn't be too outrageous to suggest that a greater value has been placed on quantity over quality. So what happened?  When did a love of karate settle into an comfortable co-existence that brings with it little in the way of skill, and even less in the way of personal growth? Why is karate still embroiled in politics; side tracked by sport and commerce? In short, how did the relationship with karate that so many karateka develop, become the shallow existential experience it is today?

Like all relationships, mine with karate has seen good days, better days, and days I would sooner forget; but in spite of the highs and the lows, the smooth and the less so, my love for karate has not altered. Somehow, from day one, I have always understood that my life is healthier, physically, emotionally, and spiritually, with karate in it. For over four decades my life has been enriched by countless experiences shared with teachers and fellow karateka. These interactions have made available lessons that would have been lost to me had I not entered a dojo or stopped training after just a few years; for better or worse, everybody I've met in the context of karate has helped shape my experience of life.

Of the many lessons I had to learn through karate, few of the physical challenges stand out in my memory; yet, I faced the tough guys in the dojo, I passed the gradings, I made the team; I fought the fights and performed the kata in front of big crowds in England and on the Continent. By the standards of many today I achieved a lot in karate during my early years; but as far as budo is concerned I had been little more than a bystander; a pedestrian walking along side a race track. It wasn't until I woke up from the dream of what I thought karate was, wiped the sleep from my eyes and began to see karate for what it really is, that (at least as far as budo is concerned) I began to make a little progress.

Karate, genuine karate, takes the same quiet courage to live with as love, for both require you to give more than you take; that you project your sense of self beyond your own being and wrap it around another. Giving is at the core of understanding karate just as it is with love, and if you have never experienced the selflessness of giving, then maybe you need to question exactly what your feelings are in relation to karate, and love.

You cannot proclaim mastery of karate any more than you can demand love; you can only give yourself over to both, and in so doing, provide the space to receive that which each has to give in return. It's a step taken without guarantee of success, a bold move made because deep inside you know you have to make it; do you have that kind of courage? It is entirely possible to use a word out of context, and you need not look very far to see many individuals using 'karate' and 'love' in ways that contradict the spirit of each.

Throughout the early 1970's I was involved in too many fights to remember. These were not schoolyard altercations, but fistfights that took out teeth, broke noses and jaws, and sometimes left a blade protruding from a torso. I never used a bladed weapon, but I did have them used against me on several occasions. With nothing more than an aluminium comb from my back pocket, I once stared down an angry young man brandishing a kitchen knife, his German shepherd dog straining on its leash, I quickly weighed my options. If I ran the dog would get me, if I tackled my opponent, the dog would get me...but, if I took out the dog? A strong kick to the dog's jaw sent its head flying up and back, and stopped it barking immediately. Its owner dropped his knife in shock, and was lucky to escape with a small scar across his face.

Back then I had no constraints when it came to fighting, every stand-off was the same; him, me, who was going to walk away....that was it! Sometimes I never got to walk away; instead I got to lie in the street in my own blood; my clothes ripped and torn, my face and body battered and swollen. Occasionally beaten into unconsciousness, my slow recovery from such beatings was always accompanied by a sadistic internal snigger; I would meet the guy again for sure, and next time the outcome would be different.

Fighting served me well for a while and brought with it a certain level of notoriety; from that, free beer followed. Looking back I appreciate the shallowness and crushing negativity of such an existence, and recognise with some clarity the tension I was feeling caused by my inability to become the kind of person I really wanted to be. The frustration was killing me, but until I discovered karate I failed to recognise a mechanism by which the course of my life could be altered.  My first faltering steps in the dojo lead me to the realization that 'my life' was 'my responsibility', and for me that was a revelation!

As many of you reading this will appreciate, the challenges faced in the learning of karate come thick and fast, especially in the early years; say the first decade or so. After that, the knowledge and experience you've gained start to kick in (no pun intended) and, slowly, you begin to even out the peaks and troughs. The way ahead may be no less confronting, but at least you are now equipped to handle what will come, that's the theory anyway. But for a great many it's a theory seldom put into practise, and examples of karateka with decades of training behind them who have yet to mature as human beings remains disappointingly high.

Maturity is not related to chronological age or the amount of time that may have passed attending the dojo; maturity is an intangible reality that others become aware of when in your company. If you tell a joke, that's funny; but if you have to explain it the humour dies in the explanation. If you have matured as a karateka people notice; but if you have to rely on your rank and title, that kills any sense of maturity you believe you may have. How long has it been since you observed immature behaviour in those you associate with...and when was the last time you spoke up when you witnessed it? An important element of maturity is courage, but you knew that, right?

The notion that getting hit doesn't hurt may seem like a strange subject for an article about karate, and linking karate to love even more incongruous. Still, the point I'm making here, is that an appreciation of both requires a similar, quiet, sense of courage; the kind of courage that doesn't weaken simply because barriers rise up to impede it. Would you give blood to save your spouse or child? How about a kidney? Would you die for them if dying meant they could live? I doubt any of you who whispered 'yes' under your breath believe you have just mouthed a lie, and yet, words are cheap. To live with karate is to live with courage and with love, but it's no easy undertaking. The extent, to which you have grasped the essence of karate, or love, depends upon your response when tested; because until tested, you will never discover your true capacity for either.

Testosterone fuelled bravado plays no role in karate, or love. Believe me, there is no physical strength produced in the former that can match the potency of the latter, for the courage to love outweighs any bravery you will require in the learning of karate. Recognizing this lies at the heart of understanding budo, ruling out extravagate displays of muscular strength that in truth only serve to demonstrate a lack of courage. Have the audacity to love your karate, to treat it well, to protect it from those who would do it harm. Preserve your kata rather than change them to suit the fashion of the day; study them, nurture their principles, and in doing so, bring them to life.

"When one loves, everything is clear – where to go, what to do – it all takes care of itself and one doesn't have to ask anybody about anything."
Maxim Gorky

The above is Part 2 by Michael Clarke, author of Redemption: A Street Fighter's Path to Peace.